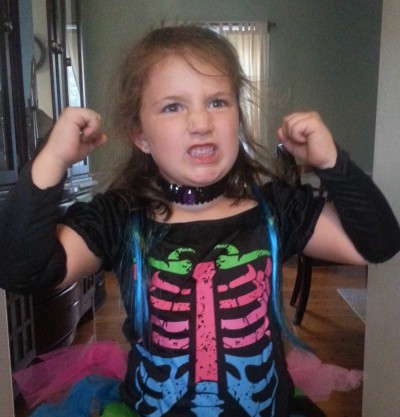 It didn’t take very long to realize that my daughter shares my interest in things that others might consider weird, a bit macabre. The first movie that she sat through entirely was a black and white cartoon about a kid who resurrects his dead dog, she wanted something with zombies for her first video game and Halloween has always been her favorite time of the year.

Many of her dolls have been drawn on or otherwise modified to look like escapees from some sort of haunted toy store. When other children were trying to decide which Dr Seuss character to dress up as for World Book Day, celebrated on the deceased children’s author’s birthday, mine was asking if we could go visit him at the cemetery. She wanted to see if his bones were having a party.

Unfortunately, she isn’t quite as fearless as she would like to be. Wednesday night I had a nocturnal bed invader who had been dreaming about “skeletons chasing me around my room” and she always skips the snake displays at the pet store. She’s “big girl” enough to be allowed downstairs to watch television for a little while on weekend mornings without waking me up, not big enough to handle a slasher flick when the remote wasn’t working and a premium channel was inadvertently left on.

Mattel’s Monster High makes a great compromise. Set in the town of New Salem, the books, toys, TV specials and direct to video movies feature the offspring of all of the great Universal Studios monsters that I grew up loving. The daughters of Count Dracula, The Mummy Ramses de Nile, Gill-Man ( The Creature From The Black Lagoon ) and Frankenstein’s monster are all here, among others. 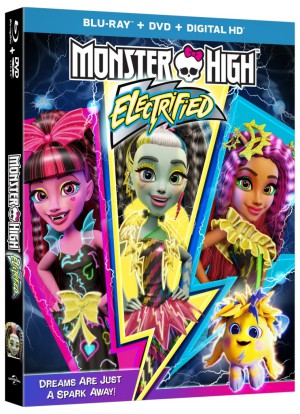 On March 28 a new movie, Monster High: Electrified will be released on DVD, Blu Ray, and Digital HD and we’re excited enough about it to team up with our buddies at Fandads, Daddy’s Grounded, CuteMonster, and the Poppin Bottles Dad Cast to give away ten copies.  I received no compensation other than a copy for ourselves. Just follow the instructions, take a minute to visit some of the guys, and you’re entered. Good luck!

This post was previously published on ThistyDaddy and is republished here with permission from the author.
—