Andy Hinds and his friend decided to become urban farmers, building a “Coop de Ville” and trekking out to a farm to bring home their hens.

As soon as she was released from her car-seat bonds, the little girl with the curly blond hair jumped out of the minivan, kicking up a cloud of hot dust.

The tall dog, thick for a Doberman, loped toward her, churning more silt into the air.

The two men who had been in the front of the minivan got between the dog and the girl.  The Doberman was easily a hundred pounds, but his ears had not been cropped, so he looked more goofy than demonic.

The men offered their hands to the dog for sniffing, and were soon petting him and scratching his head and neck.

The two little girls inside the minivan–the twins–were more cautious.  They lowered themselves from the vehicle tentatively, and clung to the other man, their dad, as they inched toward the small compound in the middle of the arid valley.

Farmer Karl leaped out of a nearby trailer, yelling at the group of visitors.  As they got closer, his words came into focus.

“You shouldn’ta brought these kids!  There are so many hazards out here for them!  These ants here…these ants will send you to the hospital!”  He yelled at the dog: “Kaiser!  Come!  Get over here!” He explained that the dog was friendly, but would knock the girls over into the deadly anthills in a heartbeat.

He pointed out the gap between the hem of the little blond girl’s leggings and the lace at the top of her sock.

“See that?  That’s where they could get in and bite the hell out of her!  I’ve been bitten by just one of them and I felt like I was gonna die!”

The two dads didn’t quite know what to make of Farmer Karl’s panic.  He clearly was not used to having kids around.  These girls had been outdoors before, in similar terrain, without incident, so the threat level conveyed by Karl seemed a little exaggerated.  Could his family farm really be the deathtrap he made it out to be?

On the way to see the chickens, Farmer Karl pointed out the tree with the huge colony of “Africanized” bees, and the area where they had seen seven rattlesnakes in the past two weeks.

The man with the twin, dark-haired daughters, carried one of his girls, who had been paying close attention to Karl’s warnings.  She would not, in fact, let her feet touch the ground during the rest of their visit, much to the chagrin of her dad.

The men and the little girls climbed back in the minivan and followed Farmer Karl’s all-terrain golfcart across fields of dust and truncated weeds as big around as #2 pencils.  The little girls were allowed to ride unharnessed, which encouraged shenanigans and shrieks of delight.  The minivan’s driver remembered riding the dirt roads between town and farm in the back of his grandpa’s pickup when he was three or four, the same age as the little girls.

Two young Belle Rouge hens were culled from the the flock and placed in a box, which was transferred to the back of the van.

The blond girl’s father negotiated with Farmer Karl as the driver wrangled the children.  He pointed the minivan toward the tiny nearby town of Alpine, where the men would pick up three more chicks, and some beer.

“So, how much did the chickens cost, anyway?” asked the driver.

The two men and their daughters had driven from San Diego that day to stock the chicken coop they had finished building on the previous day.  They could have bought chickens in town, but the blond girl’s dad knew Karl from the farmers’ market–he was their egg guy–and he wanted Karl-approved chickens.  Also, they wanted to have an adventure.  And buy some beer.

By the time the chickens and the children were safely in the minivan, Karl had calmed down.  He gave the two men instructions on what to buy at the feed store in Alpine, where they were to pick up three Speckled Sussex chicks.  Karl offered many times to accompany the men to the feed store so they wouldn’t forget anything.  They declined.  Goodbyes and firm handshakes were exchanged.  As the minivan pulled out, Farmer Karl continued talking into the open window, telling the men that they should come out to the farm for a “guys night out” some time.  Just sit around the campfire and shoot the shit, drink beer, etc.  “Yeah, we’ll do that soon,” said the blond girl’s dad.

In Alpine, the men loaded the back of the minivan with chicken feed, a bale of alfalfa, and other chicken-farming paraphernalia.  Three tiny speckled chicks joined the bigger, yellow-orange ones in a waxed cardboard box.  They moved the minivan half a block to the south and re-parked it.

San Diego County has become a craft beer Mecca in the past ten years; and among aficionados, the name Alpine Beer Company is whispered reverentially.  Many who speak its name have never tasted the elusive nectar.  But they have heard things.  Every once in a while, Alpine beer is on tap at a brew pub in San Diego, but it is almost never in stores.  You have to go to the source.

The men walked into the bar and grill part of the tiny brewery, dragging the three now-whiny little girls, and carrying the waxed box with the five chickens in it.  Stink-eyes were directed toward the nascent fowl-wranglers, but they didn’t even care.  The children settled down in the cool of the restaurant, focusing zombie-like on the cooking show on the wall-mounted TV.

A guy walks into a bar with three little girls and five chickens..

Beers arrived.  The men both ordered “Nelsons,” one of the legendary IPAs from the brewery.  The eyes of the father of the twins became moist and he said with a cracking voice, “This is the best beer I ever tasted.”

The best beer I ever tasted

After the meal was devoured, the men and the children and the chickens went into the store section of the brewery and selected bottle after bottle after growler of different beer varieties, as much as would fit into the minivan alongside the chickens and children and hay and feed.  The children screamed and played and fought on the sidewalk in front of the store.  Fatherly warnings were bellowed toward the children, and more stink-eyes delivered.

After a 45-minute drive back to civilization, the men unloaded the livestock and provisions and introduced the birds to their new home.  The chickens had no trouble adjusting.  Pecking around under the shade of peach and avocado trees must have been an improvement over scratching in the dustbowl they had lived in before.

The girls chased the chickens around the yard for about ten minutes, and then decided that the swingset was more interesting. 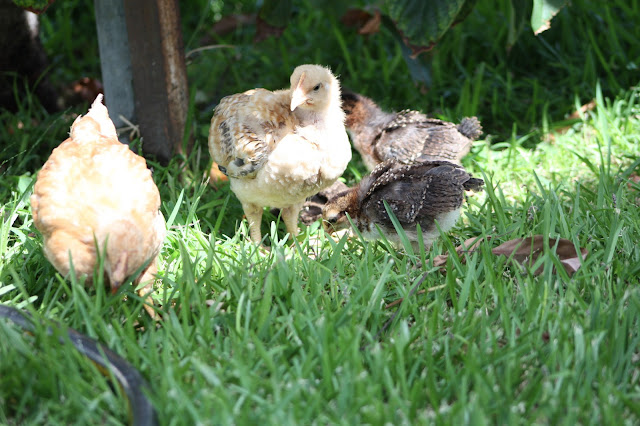 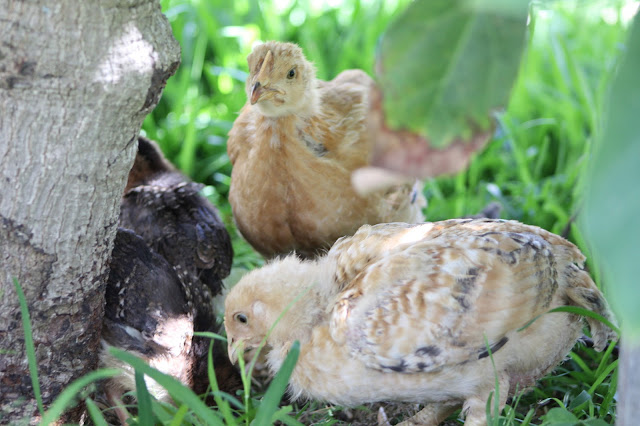 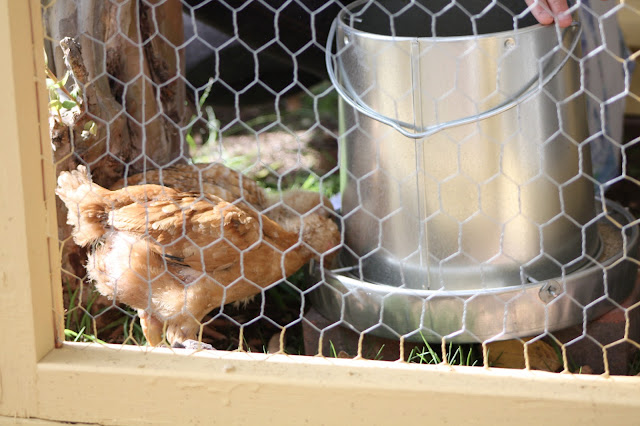 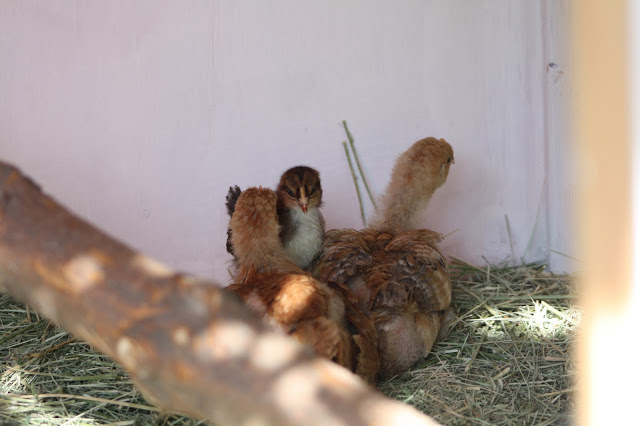 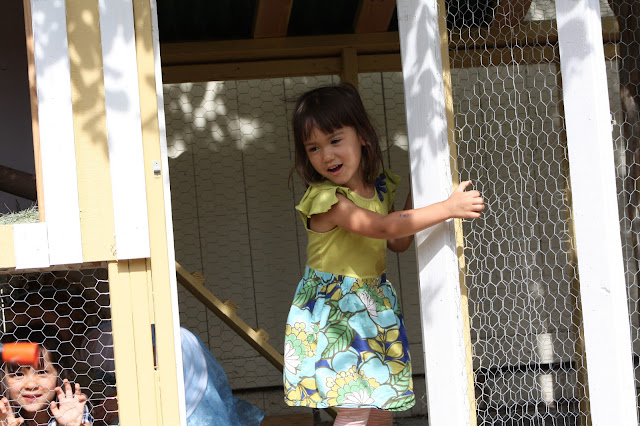 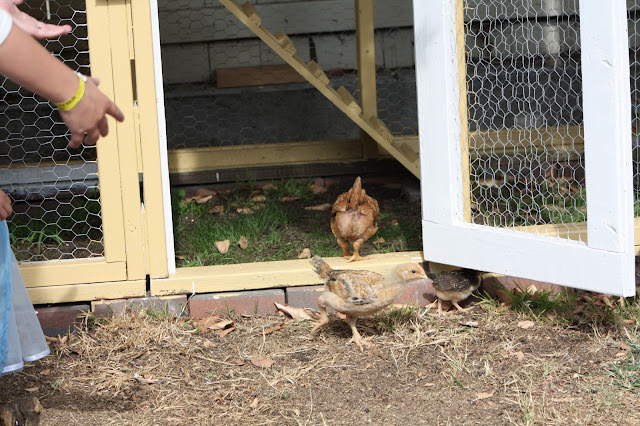 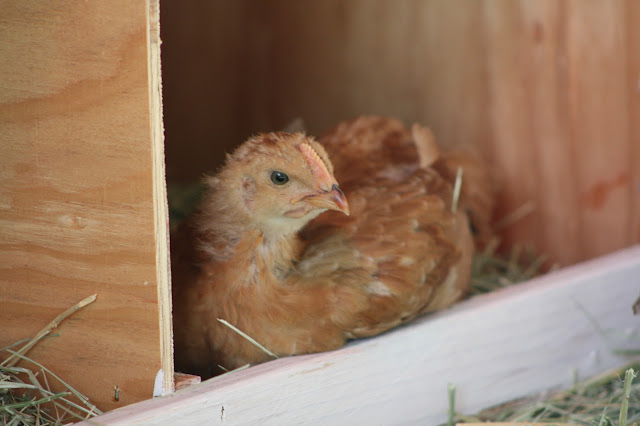 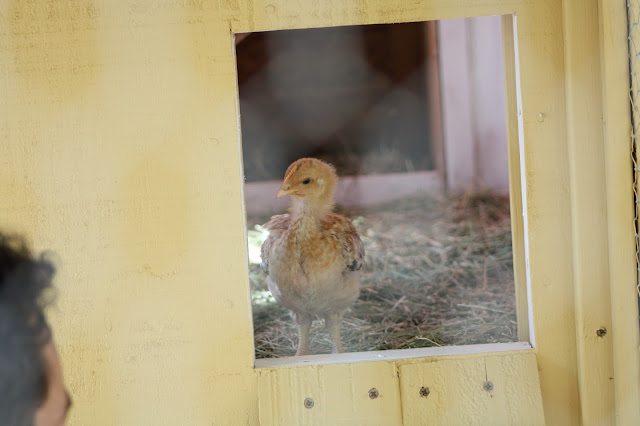