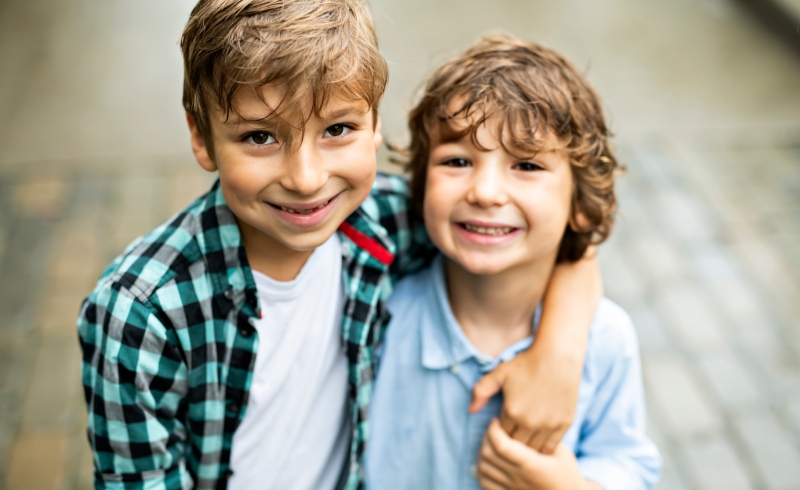 Rob Watson and his partner planned to raise a boy and a girl. You know what they say about plans…

Some of those fighting marriage equality these days, want you to believe that there is only a single possible right way to create a “real” family. The way they suggest is by means of unprotected, unplanned, procreative sex. Or, as Nan Hunter observes, “accidental procreation” which then warrants 1500 protections and benefits by means of a “bribe (for) heterosexuals “ to get married. Only the biologically created family deserves marriage, they argue, and all the rewards to stay together.

The notion is insulting and absurd, not only for same sex coupled families, but for opposite sex families as well. Real families come together in a variety of ways, the best of which is when all the members love each other and deeply desire a lifetime bond.

That is what happened in my family.

My partner and I had pursued various options to expanding our family beyond the two of us. We explored surrogacy, and we explored private adoption. All potential routes to family have pitfalls. As we were going through our evaluation process, I remember discussing the options with a total stranger at an airport. She saw me pouring through literature and shared stories of her numerous miscarriage heartbreaks on her way to having a family. “Whichever way you choose, just know it can be hard, but it will be OK and worth it,” she stated as we said goodbye.

My partner and I ultimately chose fostercare/adoption. Having come from recovery experiences ourselves, it was a great fit. We understood the situations of the birthparents without judgment, and we understood the real need of the children as well as the obstacles they might face. We committed, trained and waited for the call for a placement.

We got numerous calls for toddlers on temporary care. Those were great experiences. Then, we got a call about a newborn baby, born six weeks prematurely to a heroin addicted mother. He weighted 4 lbs, and had heroin exposure himself. He was to be ours for the foreseeable future.

I carried him on a sling on my chest for the next few months. We had to make sure he got a sufficient amount of nourishment in each feeding to avoid brain damage as we went through the process of supporting his birth parents through possible reunification. When those efforts failed, we went on to full adoption. We named the baby, now ours, Jason.

As Jason passed his one year birthday, we opened up our home for the potential of adding a sibling. We got a placement. She was a beautiful baby girl, and she looked just like Jason did when he was a newborn.

We had warm feelings to keep her, but were equally enthused that her birth mother was responding well to the recovery program. We supported that momentum and looked forward to a safe mother and daughter reunion.

Meanwhile, good friends of ours, another foster family, had a 10 month old little boy placed with them. He had been discovered abandoned in a trailer. My partner often did play dates with them, and the little boy in their care and our son Jason became very close and attached.

They seemed to speak a common language, playing well together. My partner called me at work one day, “You have to come see this little boy and how he and Jason are. I told the other family that if anything was a problem with their placement, to let us know and we would love to take him.” I was alright with this, but a little guarded as our plan had been to have a boy and a girl—not two boys. Plans change and life takes over.

When I got home that evening, the play date was still going on. I will never forget the moment that I first saw Jesse. He was crawling around the corner headed toward the dishwasher as I was headed the other way… and we locked eyes. It was one of the most profound moments of my life. Here I was with direct eye contact with this toddler and the look between us said it all… “Hi Dad, I am your son. Hi Jesse, I am going to be your Dad.”

A week later, it happened. The fostermom called and asked if we were serious about our offer. It turns out that her family had to move into very tight quarters temporarily and she was much better equipped to care for the baby we were nursing, than Jesse, the rough and tumble toddler . So, we called the authorities, and made the switch. Jason and Jesse, new best friends, were now on the way to potentially becoming brothers.

I was worried however, being the working Dad, that I might not get to bond with Jesse as I had with Jason. I did not get to carry him on me for months, and saw him in the mornings before I left for work, and in time for a kiss goodnight when I returned. He was exposed to my partner, other fostercare providers and others more than he was seeing me.

I wish I could say that road to brotherhood was trouble free. It was not. Jesse was still on a unification plan with a birth parent, and it looked like things in that regard might be successful, until one horrible weekend. Jesse came back from an overnight visit battered and bruised. We called the social worker immediately and the reunification attempts were closed.

I slept by his crib for the next two weeks, and although he was normally a through-the –night sleeper, he awoke nightly screaming and crying. Controlling my own anger and pain, I grabbed him and held him, as nightly the reaction grew less and less until he was again able to sleep through the night.

I don’t know if being there for him in that way was the factor, but our bonding was not an issue. As he has grown, we are lock step and almost able to read each other’s minds. As I look at my sons, I am filled with the awareness of a love for each that I could never fathom in my wildest imagination previously. The love I have for each is unique, each powerful in its own right, but its own “color” if you will. Jason is the son of my heart, Jesse is the son of my soul.

Today they act as twins. Since he is physically bigger, they have decided that Jesse is the “big brother”. Since he was born four months earlier, Jason has been dubbed, by mutual consent, as the “older brother”. We do not have a “little brother” in the family.

That is how two little best friends became brothers. It is how my gay family came together. We have a unique story, but we are not unique. All same-gendered parent families have a story. While my friend at the airport was right, “all ways can be hard”, all ways can also be miraculous, loving and intensely wonderful. How our families come together is being judged today, and in the next few months. It will be judged by the US Supreme Court. Our families are likely to be judged long after that as well, no matter what the results. And, no matter what the judgments on our value, I will always know the truth. I know how thoroughly REAL we are. I live it and I have seen it. I saw it as I looked into a little boy’s eyes for the first time in front of a dishwasher.

This post was originally published at evolequals.com and is republished on Medium.

You might also like: To the Man Who Has Refused to Eat Due to Utah Same-sex Marriages: Why Your Behavior Concern Me

So precious! What a beautiful story ^-^ like your airport friend I’ve had miscarriages but currently 40 weeks waiting for our 2nd child to be born. All ways are hard but all ways end with the wonderful gift of love! All families need a strong bond and true love you feel your son’s is reflected in your writing – some people like those who have a single/closed view of how a family is made need to know that.

Beyond precious. Rock on. 🙂

I’m moved to tears. My wife and I are going through so much of what you and your partner did before your sons arrived. We’re currently waiting for the agency to call us, which has been both a test of patience and faith. We have many of the fears that you did, and hearing how everything has worked out for you strengthens my trust in God’s master plan for us.

This was brilliantly written, and for me, exactly what I needed.

I like to think I am opened minded…but this…it opened my eyes. Thank you, beautifully written.

This story is probably one of the sweetest things I’ve ever read. The imagery of you and Jesse locking eyes for the first time was powerful, and the way you comforted him after he came home bruised brought a tear to my eye. <3 <3

However, I do feel like this otherwise sweet story was a bit overshadowed by the first paragraph. Is that seriously what you believe of all het couples? That everyone is just bumbling around shagging like animals without any thought and, oops, popping out babies left and right?

Thanks for your comment Poof– regarding the first paragraph (and please read the first sentence of the second paragraph): the concept I cite is from anti-marriage equality proponents on why opposite sex couples need marriage. This was part of their rationale in briefs to the Supreme Court. Per paragraph two, no, that is not my opinion of heterosexual couples. Thanks for your feedback!

That is such a sweet story! 🙂

FacebookTweetPinEmailShares2.4k
wpDiscuz
9
0
Would love your thoughts, please comment.x
()
x
| Reply
Share this ArticleLike this article? Email it to a friend!
Email sent!