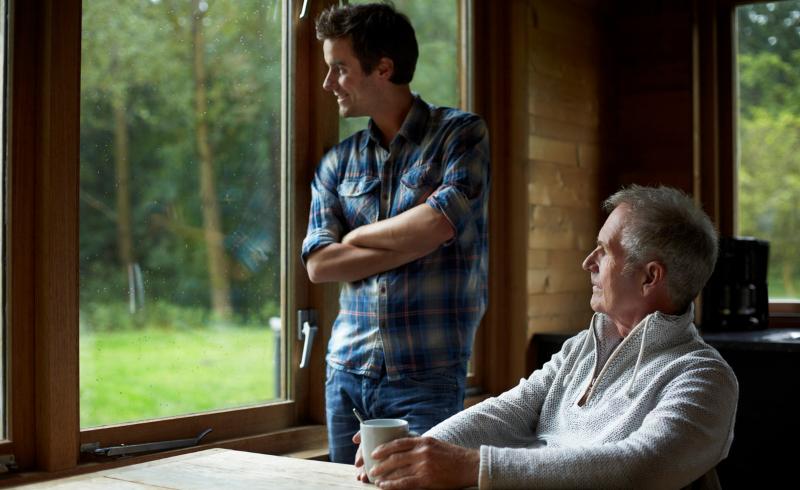 This is a guest post by Nik Wood, Founder of Life Athletics, and one of my best friends. He was the first person I told when I found out I was going to be a dad.

After reading an Instagram post about my relationship with my dad, Nik took a close look at his relationship and story around his father. This article details how Nik shifted his lifelong negative thoughts into positive, useful, healthy thoughts.

I want to note for the reader that when you share something on social media, you never know how someone will take exactly what they need from your writing and use it to change their life. So keep giving your gifts to the world!

Going in, Father’s Day 2017 was an event I would have preferred to have skipped.

My dad and I had been in a bit of a ceasefire mode but things weren’t great.

We had spent the previous year not talking because I’d been offended by something he had said and I had felt that he was too toxic to have in my life.

I had gone to workshops and read books, seen counselors, therapists, coaches, healers, I still had carried massive amounts of hurt in my life that I attributed to my father.

We still didn’t have the connection we wanted but I had given up feeling like it was possible and so was settling for something that hurt less.

That I have long believed that our relationships with our parents can influence our relationship with the rest of life, made me even more bummed out about the situation but I felt powerless to do anything about it. I had often said that I had tried everything.

Seeing Father’s day coming up on the calendar was something I would have rather ignored.

As if to force me to face the situation I pulled a muscle in my upper back leaving me in so much pain that all I could do was stay in bed for two weeks, unable to turn my head.

The pain made it hard to just read a book, or work on anything creative. To make matters worse, my external hard drive with all of my movies had stopped working. I was essentially left to my own thoughts and to scrolling through posts on Facebook.

It started slowly, a few posts from Kiwi friends and people in Australia, then friends in Korea and then the floodgates started as friends from around the world started posting photos and messages reflecting their love for their loving fathers.

I started to seethe.

It began as mild jealousy but it turned to anger quickly and the response took me by surprise.  I normally wouldn’t describe myself as an angry person but here I was enraged by posts about love and connection, two things I claim to be a huge fan of and normally celebrate.

Mustering all of the training and acquired techniques I could, I wrenched my attention away from being upset and set about to understand the upset. I looked at it, observed it, turned it around, and watched.

This anger was trying to tell me something and I wanted to know what. The flavor of the jealousy and anger was loss and longing and it was triggered by posts of happy and healthy examples of fathering. It seemed clear that I felt as though I had missed out on being properly fathered. That made sense. I had been saying that for a while.

I started to make a list of all of the things that I wished I had had from a father or the process of being fathered.

I wrote that I wished that I had had a champion. Someone in my corner who fought for me, who cared for me, a father to whom I mattered. The anger was turning to sadness at this point and I then I wrote “… my dad did all of those things… I just wish he’d done them more, and more consistently.”

Had I really just written that my father, MY FATHER, matched my description of ideal father but that I still wanted more? I sat up sending flashes of pain down my injured neck.

My mind was jumping and connecting things quickly.

My criticism of my dad started simplifying and exposing its emotional roots. I felt loved and supported by him when he was around and his absence stung. My mother had blamed this for why I hadn’t done well in school following their separation but I had stubbornly rejected this explanation for years.

I kept writing and saw that the hurt had extended to more than just my dad. The hurt little kid that I grew from thought his father wasn’t there all of the time because out of choice and it was his fault. I had made up that I wasn’t good enough for my father’s love and had extended that to everything else that I wanted to love me in life. The women I wanted couldn’t possibly want me, I wasn’t lovable. I wasn’t worthy of making a good living, having friends, the list went on. Coping mechanisms had been devised and so I looked like I was doing ok from the outside but internally I was never enough.

Seeing that my dad might have been attempting to do exactly what I wanted and I still felt as though it wasn’t enough shook me. This was huge for me.

To further solidify the growing notion that my father had in fact been there more than I had ever acknowledged I made a list of the times he HAD been there for me and things of importance he had done for me. It spanned nearly four typed pages before I began to weep.

I’m 38 years old. I’m 6’6” and over 200lbs. These facts often make me feel like I should be all grown up but in this moment I was a little boy being hugged by his dad.

The illusion that my father hadn’t been there for me vanished before the evidence of a man who, while still flawed and human, had made a valiant effort to be an extraordinary father.

Suddenly I saw that I had constructed a story that I was unloved and unlovable and had been fighting to validate it for the majority of my life despite evidence to the contrary.

This was textbook. I should have seen this, but I hadn’t.

The hurt boy in me had taken over and despite knowing the theory, I was blind to it in my own life.

The construct collapsed and I watched it go and then called my father.

We spoke for two hours. I apologized. I shared. We both softened.

The list I had made of times he’d been there for me turned into a trip down memory lane and all of the happy memories anchored as we laughed.

He understood immediately when I talked to him of the impact the old story had had on me.

I could hear the tears in his voice when he told me that seeing me get past that was his heart’s greatest desire.

We ended the call with him saying “I love you. I’ve always loved you. I will always love you.”

For the first time in my life, I was able to believe him and it changed everything.

Derek Loudermilk is a business coach for location independent entrepreneurs and one of the world's leading experts on adventure. He is a professional adventurer, former pro cyclist, scientist, and host of the Art of Adventure and Uncharted Family podcasts.

After near death experience with a blood clot in his brain, Derek dropped out of his Microbiology PhD program and began traveling full time to understand how adventure can lead to a more fulfilling life.

In his quest to understand the future of entrepreneurship around the world, Derek has traveled to every US state, 35 countries, and lived on four continents as a digital nomad. He is the author of the bestselling Better Business Book and the upcoming book Superconductors.

Derek is a proud papa to his new baby son, Axel, and travels the world as a family with his partner Heidi. Find him at Derekloudermilk.com or on Twitter and Instagram @DerekLoudermilk

FacebookTweetPinEmailShares185
wpDiscuz
0
0
Would love your thoughts, please comment.x
()
x
| Reply
Share this ArticleLike this article? Email it to a friend!
Email sent!