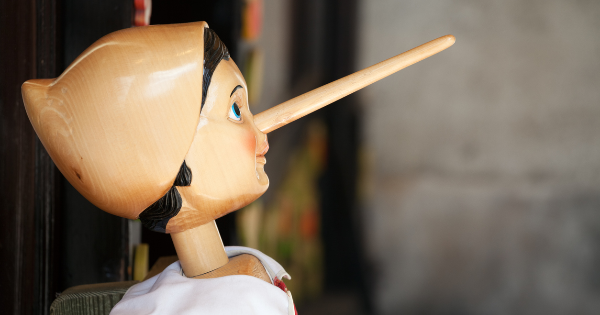 Dear Mr. Dad, My 12-year-old daughter is a liar. I wish it weren’t true, but just about everything that comes out of her mouth is a lie. If she tells me she’s texting a girl from school, it’s probably a boy. If I ask whether she’s cleaned her room, she’ll look me straight in the eye and tell me Yes, even though I know (and she knows I know) that she didn’t lift a finger. If I were to ask her if the sky is blue, she’d probably tell me it isn’t. Why is she doing this and how can we get her to stop?

A: Telling lies is a part of human nature, and it starts very early in life. A study on lying done at Toronto University in Canada found that about one in five two-year-olds lie, but by age four, nine in ten were doing it. And the lying doesn’t stop when we grow up. Researchers at the University of Massachusetts found that 60% of adults can’t make it through a simple 10-minute conversation without telling at least one lie (in fact, people in the study told an average of three lies in that 10-minute period).

Lying is a learned behavior. When we’re very young, we look at the adults in our lives as all-powerful and all-knowing. Trying out a lie—and getting away with it—shows us that people can’t read our minds. As we get older, we discover that lying can sometimes get us out of trouble and may even help us avoid getting punished. The more successful the lies, the more often we’ll tell them.

I know I’m painting a pretty gloomy picture of humanity, but the silver lining here is that since lying is a learned behavior, it’s possible to unlearn it as well. You may never be able to get your daughter to stop it completely, but you can at least get her to cut back. It’s a three-step process.

First, try to find out why she’s lying. Is it to cover up a previous lie? To avoid taking responsibility for something? To attract attention and get you to spend more time with her? Once you know what’s behind the lies, you’ll have a better chance of being able to deal with them—and she won’t feel the need to lie as often.

Second, come up with some consequences that will kick in when your daughter lies to you. Talk with your spouse and agree on a single, consistent response to lying that you’ll both support. If possible, ask your daughter to come up with what she thinks is an appropriate consequence; kids often come up with harsher punishments than their parents do. Then you’ve got to stick to your guns. Once your daughter knows that getting caught in a lie will result in X happening this time, next time, and every time thereafter, she’ll think twice before telling you whatever lie pops into her head—particularly if X is something she really doesn’t like.

Third, incentivize her for telling the truth—even if it’s a really small thing. If you ask her whether she’s finished her homework and she actually has, let her know you noticed and give her a reward (it doesn’t have to be a big deal—letting her stay up 20 minutes past her bedtime is enough).

Trust is something that has to be earned. Your daughter needs to know that her lies have seriously undermined your willingness and ability to trust her, and the only way to rebuild that trust it to start telling the truth.

Facebook29Tweet1Pin1EmailShares31
wpDiscuz
Share this ArticleLike this article? Email it to a friend!
Email sent!