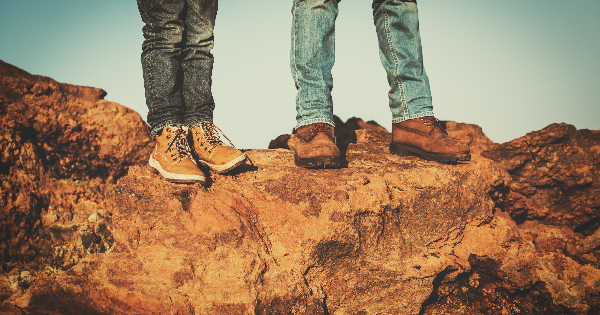 My family lives in a part of the county that is “rapidly growing” which means humans are actively cutting down, digging up, hauling away, and burning the plants that were actually growing. When our house was completed, a tall, skinny maple was planted a passing nod to the environment. Two robins built a nest and moved in.

But a sudden storm blew their home to the ground and shattered the baby blue eggs into a hundred pieces on the sidewalk.

My middle child, age four, squatted to the concrete. He plucked single bits of the shells between this thumb and forefinger and meticulously laid each bit back into the nest, clumping the frags in tiny piles while I looked on and wept, silently.

The poet and essayist Ross Gay said that, for parents, terror and delight “sit next to each other, their feet dangling off the side of a bridge very high up.” I am afraid of heights. I would not enjoy climbing a tree much higher than the slender, 10-foot maple outside my home.

Our house is three stories high and a little less than 1,800 square feet. My wife describes our humble abode as tall and skinny—“like you,” she adds with a wink at me. I walk a little taller when she does that.

The third floor has been designated as the playroom and was intended to be a common domain for all our young chickadees. But the two older brothers have commandeered the space, setting up intricate arrangements of LEGOs which, they rightly note, their younger sister would promptly smash to smithereens if the tall and skinny father allowed said daughter to climb the stairs.

LEGOs can be rebuilt. That’s pretty much the point. But I concede their counterpoint—LEGOs can rarely be rebuilt the exact same way, especially if, like these brothers, the instructions are abandoned and all the pieces are massed into a large pile on the floor from which you make your new creation one piece at a time. I think that’s how the middle child got the idea that he could rebuild those robins’ eggs and I delight in that thought, even as I know some things break forever—a fact of life which, even in the abstract possibility, still makes me light-headed and nauseous as if I was peering down from very high up.

Ross Gay alters his metaphor: “the dangling legs way high up belong to the mayors of terror and delight, both of whom look, I’m afraid to say, exactly like your child.”

Across the street are tall, skinny houses much like ours and, behind them, an ally where it is more or less safe for bikes and scooters. What a phrase, “more or less.” How can it be both? A paradox, like terror and delight, which more or less describes my mental state as I watch the two younger children bomb down the steep hill, the youngest on her scooter, balancing one leg behind her in the air, and the middle (not to be outdone) lifting both legs nearly as high as his handlebars. They scream while whooshing past, “Watch me, Daddy!”

Oh, I am watching! Watching with the certain knowledge that I’d be helpless should either one fall. While watching, I envision the various bones and combinations thereof that could break on the asphalt.

Also, it delights me deep in my own bones to see their obvious pride in their skills and bravery.

The eldest quietly circles me in wide loops on his scooter. So far, he has been the only child with a major injury—a fractured leg when he was but eighteen months old, necessitating a plaster cast from his ankle all the way to his knee.

He hurt himself in our old home, a rambling farmhouse built in 1875. My father-in-law said that the old house had “good bones.” It had wooden floors upon which our firstborn, who has always insisted on wearing socks, slipped and fell with his leg beneath him. I was right beside him and yet helpless to prevent a part of him from breaking.

That, I suspect, is also a metaphor for parenting.

Five years later, the bone has healed. As his brother and sister truck their way back up the hill, I turn and watch him. Maybe the terror of that fall has left him cautious. Or maybe he’s circling his private thoughts, seeking connections between seemingly disparate ideas—little bits and pieces—that he might rebuild something that had broken. Delight in creating something new.

I know that he’s “rapidly growing” which means the teenage years, once a distant idea, are now within sight, dangling their skinny legs off the side of a bridge very high up.

Andrew Taylor-Troutman has a new book, Fragile Hope, that will be published in late summer. It is a collection of essays and poems about life in the coronavirus.