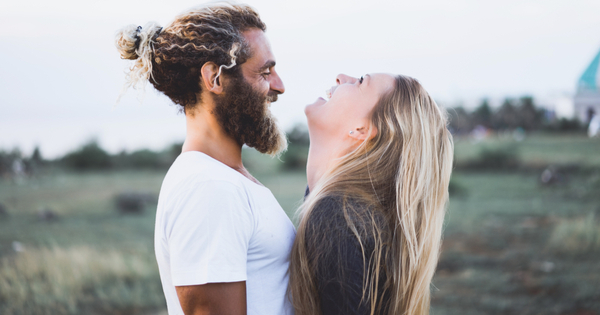 What is it that determines who we are sexually attracted to? This is a surprisingly complex question to answer because attractiveness appears to depend upon a number of factors. Some of these are biological, others are psychological, and yet others have to do with our social environments. Below are ten of the most interesting findings scientists have documented when it comes to attraction.

1. We tend to be attracted to people who look like us. For instance, in one study, researchers asked heterosexual men and women to rate the attractiveness of several faces [1]. Included among the photos was a picture of one’s own face that had been digitally morphed into the other sex. Participants found this morphed face to be more attractive than all of the others!

3. If you’re already physiologically aroused (e.g., from having just exercised) and you meet someone new, you’re more likely to develop an attraction to that person. Why? You may mistakenly attribute the source of your elevated heartbeat to the stranger instead of the true source of your arousal. Learn more about the role of arousal in attraction here.

4. “Beer goggles” really are a thing. Research has found that the drunker people get, the higher the attractiveness ratings they give to strangers. Alcohol also changes how attractive we perceive ourselves. You can learn more about the science of beer goggles here.

Justin J. Lehmiller (Ph.D., Social Psychology) is an internationally recognized sex educator and researcher. He formerly served on the faculty at Harvard University, where he was awarded the prestigious Certificate of Teaching Excellence for his highly-enrolled Psychology of Human Sexuality course. Dr. Lehmiller conducts research on casual sex and safer-sex practices and has published a sexuality textbook that is used in college classrooms throughout North America. In addition, he runs a popular website entitled Sex and Psychology and does freelance writing for Playboy and other major publications. Follow him on Twitter @JustinLehmiller and Facebook (facebook.com/psychologyofsex).

#5 : Sorry, but this “research” is incredibly skewed. There’s a vast difference between availability in a dating profile and availability in a one-to-one interaction. In a dating profile it signals you’d go with anyone and we all like it to be “special about us” and seems it’s “to be not alone”. In one-to-one interaction, it IS specific and “about us”, so “hard to get” is most likely to be interpreted as “not interested” or d**che / b!tich.

I would never be attracted to a woman that looked like me, nor my parents.

That’s what you say now, Arch!! Give it time… it’s a sneaky thing. My brother married a woman of a different race who technically looked nothing like my mom but reminds me physically of my mom anyway.

A person’s mannerisms, body kinetics, Styles of dress and speech……even if physical appearance is quite dissimilar can attract a person, when the style is similar to their own or a parent /family member’s.

I am still not attracted to women that look like me. haha

I said the same thing, and now a man who looks like my father, or someone who reminded me of my father that I used to date but it never worked out, likes me and I am actually attracted to him. I have no idea how it works. It’s interesting when you see couples and they look the same and have a dog that looks like them as well. Are we THAT narcissistic?

Facebook7.9kTweetPin16EmailShares7.9k
wpDiscuz
6
0
Would love your thoughts, please comment.x
()
x
| Reply
Share this ArticleLike this article? Email it to a friend!
Email sent!