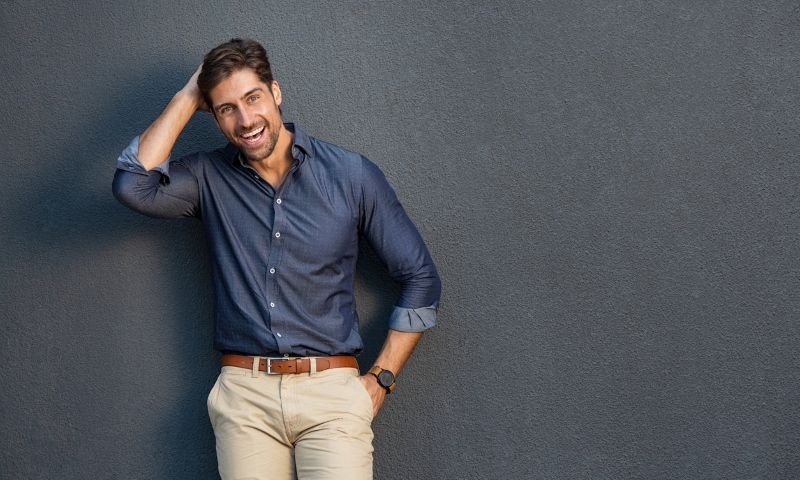 It’s a warm afternoon, and you’re in your favorite coffee shop, slowly sipping away your double espresso and minding your own business. A few minutes later, a couple walks in, and just by looking at them, you spot something odd.

They seem somewhat mismatched — as if they don’t belong with each other. You think to yourself, “If I were a match-maker, I’d probably allocate each of them a different partner.”

You’ve seen this more than once, right? So have I.

In my years as a cabin crew, it wasn’t unusual to see couples who appeared somewhat mismatched. You know, the lady would be drop-dead gorgeous, immaculately dressed with an aura of sophistication around her. He, on the other hand, well… let’s just say he didn’t look anything like her.

Do you know why we find this weird?

Because social media sells us the story that in order to attract a woman, you need to have specific sexual attributes like a defined six-pack, zero body fat, or huge muscly arms.

The truth? None of it is true.

Just look at divorce stories, and constant relationship dramas of couples whom the world thinks are perfect for each other.

As a woman, I’ll be the first to tell you that although we appreciate some eye candy, what we can’t get enough of — in fact, what makes us stick to you like a tick — is the qualities you possess.

The good news? You can easily transform yourself into a man whom all women will be insanely attracted to if you develop the qualities below:

About four years ago, a guy boarded the aircraft, where I worked as a cabin crew. I welcomed him on board, took him to his seat, and proceeded to introduce the first-class suite features.

I also offered him a glass of champagne, and as we continued to exchange pleasantries, I noticed something intriguing in his demeanor; a certain degree of self-confidence was written all over his poise and style.

His mannerism was a silent whiff of assuredness that sparked a warmth inside me. Although I was cognizant that I was in a work environment and was obligated to be professional, I simply couldn’t fight the magnetic attraction.

He exuded high confidence. What’s more, is that his confidence didn’t just attract me to him on that memorable flight. It reeled me in his life. Four years later, the attraction hasn’t waned one bit.

Want to attract the most amazing woman with the pull of a magnet? Start by working on your confidence. Everything starts here. What use are toned abs and a sexy body when you’re too insecure about talking to a woman?

Work on harnessing your confidence by fueling your emotional and spiritual reserves. This way, when you enter into a relationship, you’re not needy or clingy.

Guess what? Nothing is more repugnant to a woman like the stench of neediness. It makes her run. Fast. Being confident means, you’re able to take care of yourself and your needs.

As such, a woman feels safe enough to let her guard down because you not only absolve her of the need to validate you, but she also knows you’re not in the relationship to benefit from her.

When you’re confident, communication becomes easy. An element that makes any relationship thrive and one which women totally appreciate. Want to speak your mind and express the emotions buried deep in the recesses of your soul?

Self-confidence is your way out.

Believe it or not, a woman will appreciate you more when you tell her that she’s wrong, when a dress doesn’t flatter her or when she cooks a meal that sucks. Why? It shows her that you respect her too much to smoother her with a lie.

By embracing honesty, you’re signaling that relationship with you is built on transparency. When you don’t sugar coat your words, a woman gets it: You’re not desperate to be liked. This is gold.

A friend of mine was married to an intelligent, kind, and very articulate university lecturer. Many held him in high regard. You’d think he would be as amazing in his home as he was in his workplace, right? Not so.

He was a different person altogether. He made promises he couldn’t keep, failed to take charge of any marital responsibilities, and didn’t bother committing to family events.

One day, my friend’s colleague offered to fix her car. Soon after, he arranged for someone to mow her lawn. Before long, he was solving her day to day problems and running her errands.

My friend was so relieved to find a guy she could finally rely on, and she started spending more time with him. Do I need to tell you how the cookie crumbled?

Here’s what I’ll tell you: You don’t have to look far, because unreliable men are right here with us, setting footprints on this very earth. And they wonder why women aren’t attracted to them. Really?

Confucius knew what he was talking about when he said:

“A man who lacks reliability is utterly useless”

Look, you don’t need to be superman — that’s not even realistic. A woman is attracted to a man who shows up. Period. See a sticky situation? Offer a suggestion, option, or an idea. Anything.

It may or may not work — but that’s not the point. I promise you’ll win points just for trying, whether or not you actually solve the problem. Commit. Keep your word. Don’t be a waste of space.

“Obstacles don’t have to stop you. If you run into a wall, don’t turn around and give up. Figure out how to climb it, go through it, or work around it.” — Michael Jordan.

I recently watched a movie depicting the life of Niki Lauda. In it, they told of the horrible car racing accident that burned him severely and left him permanently disfigured.

What impressed me about Niki wasn’t so much his competitive streak but his tenacity and grit to bounce back to the game. He could’ve easily resigned to fate and faded into the sunset of his days reminiscing the “good old days.”

Not Niki. He got back to the game of life.

Look, I get it. Not many can survive such. Even for the strongest of us, it would be a bit much.

This is the harsh truth, though, even with “little” disasters — far less severe than that of Lauda — many men tumble. They run from their problems instead of facing them.

Develop a thick skin. Have grit. Life is tough, and most people are attracted to someone who will be by their side as they ride it out.

You see, there’s something insanely attractive about a man who can bounce back when a calamity shatters his world.

Don’t get me wrong, you’re allowed to lick your wounds. But do this too long, and you’re stuck. Whether it’s the loss of business, bankruptcy, death of a loved one, or a global pandemic such as we’re experiencing now, refuse to stay down. Get up, and keep moving.

She’ll admire you greatly when she sees you looking for solutions to improve your life instead of allowing yourself to be a victim of society.

Set yourself aside from the millions of other men out there and work on building the vision for your life. A woman will not only respect you, she’ll fight to be a part of that vision.

Perhaps you don’t possess any of the sexual attributes like the models in magazines. Maybe you even struggle with a few insecurities. Perhaps you’ve had some rocky bumps in your life.

Guess what? None of this matters as much as you think it does.

If you want to be a man whom women will not only chase after but will also cling to, start developing the qualities above. One by one. You don’t have to move heaven and earth.

Remember you’ve got everything you need already because real and lasting attractiveness isn’t what the world is trying to sell you; it’s the qualities you possess on the inside.

You’re smart, capable, and healthy so that’s a good place to start. All you need is to tweak things here and there and guaranteed, women will be insanely attracted to you.

I write to help you overcome your self-limiting beliefs and become the best possible version of yourself.

Eight and a half years ago, God in His infinity mercies, bestowed
me the honour of travelling the world. I joined Emirates
Airlines. As cabin crew for one of the best airlines in the world, I
set foot in over 80 countries. I struck up friendships with
colleagues drawn from a myriad different cities and continents.
I intermingled with customers from all walks of life. I
discovered a diversity of cultures, cuisines, values and way of
life.

My world has never been the same.

I am thrilled to share my life experiences with you as we forge
ahead to scale the wall of life. I ride on the wings of hope and
excitement that as I share the tales of the crackling flames that
have leaped through my life, I will enrich yours. That you will
believe in yourself enough to let your light shine though. That
you will see the Spark within you and it’s potential to ignite a
flame in your life.