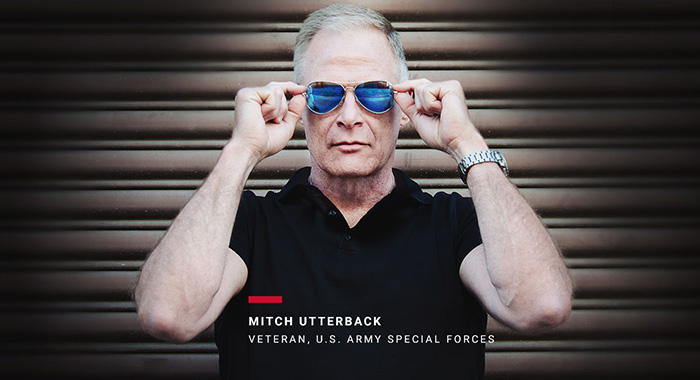 Mitch Utterback exudes a quiet, serious calm. With a strong voice, clear eyes and a sharp mind, he is instantly recognizable as someone you’d want around in a crisis. And while his strength and integrity are palpable, they only thinly veil his seemingly endless capacity for compassion, humility and humor.

A Life of Service

Mitch set his sights high from the very beginning. As a young boy, he dreamed of being an astronaut or a soldier – and he made good on that goal. Mitch enlisted in the Army at 21, and while he humbly refers to himself as simply a veteran, the reality is that he rose to the rank of Lieutenant Colonel in the U.S. Army Special Forces, serving for more than 20 years – including four deployments after 9/11, to both Iraq and Afghanistan.

Mitch has since retired from the military, and recently completed a master’s degree in Journalism from the University of Colorado at Boulder. However, he still considers himself a “veteran in transition.”

“I’ve learned that when you have a life where you’ve committed yourself to serving others, you just can’t stop because your job changes,” he says. And he hasn’t. Today, Mitch helps veterans transition back to civilian life, provides expert military analysis to national and local news organizations, and is part of a National Incident Management team that responds to natural disasters.

Vision for a Better World

“It’s important to stay true to yourself, but it’s more important to keep making a contribution to the world. You have to find causes greater than yourself,” Mitch says. And he has made that pursuit his life’s work, trying to “leave every place I go a little better than I found it.”

As a journalist, speaker and volunteer, Mitch spends a significant amount of time on the road and in front of his computer – work that relies heavily on his vision. He trusts his eyes to Eagle Eyes advanced optic technologies, so that he can enhance his vision while bettering the lives of others.

“I notice a difference whenever I wear Eagle Eyes, especially the sun protection element. If it was good enough for astronauts in space, it’s certainly good enough for me,” says Mitch, referring to the original NASA technology from which Eagle Eyes lenses are developed.

In fact, Mitch was first introduced to Eagle Eyes by his friend Walt Cunningham, an astronaut on Apollo 7 (because hey, if you didn’t get to become an astronaut, the next best thing is being friends with one!). Walt gave him a pair of Eagle Eyes for Christmas one year, and Mitch has been a loyal customer ever since.

Mitch wears sunglasses religiously, and since he was first introduced to Eagle Eyes, they have always been his first choice. For Mitch, what sets Eagle Eyes apart is the TriLenium™ polarized technology, which blocks out scattered blue light and 99.9% of harmful UVA and UVB radiation.

The style doesn’t hurt, either, with updated takes on the classic military favorite, aviator frames.

“The glasses that I wear the most are my Magellan aviators in gunmetal. I think those work best with my face – and a little bit of my vibe and my style.” We agree, Mitch!

So, what’s next for Mitch? More of the same.

“I’m retired from the military, but I’m not done serving yet. And that’s serving the cause of animals, veterans and people in need. So in my life now, I’m just out in the world, trying to leave every interaction that I have better than it was before I walked into it.”

If you feel moved by Mitch’s contributions and want to take some action this Veterans Day, there are two charities that Mitch loyally supports: the Special Forces Charitable Trust, which provides comprehensive support and services to the U.S. Army Special Forces Community and their families; and the Best Friends Animal Society, the largest no-kill shelter in the country.

A Military Vet Reflects on a Life of Service https://t.co/MVEsAXjRIk sponsored by @eagleeyesoptics

Facebook9.3kTweetPin1EmailShares9.3k
wpDiscuz
Share this ArticleLike this article? Email it to a friend!
Email sent!