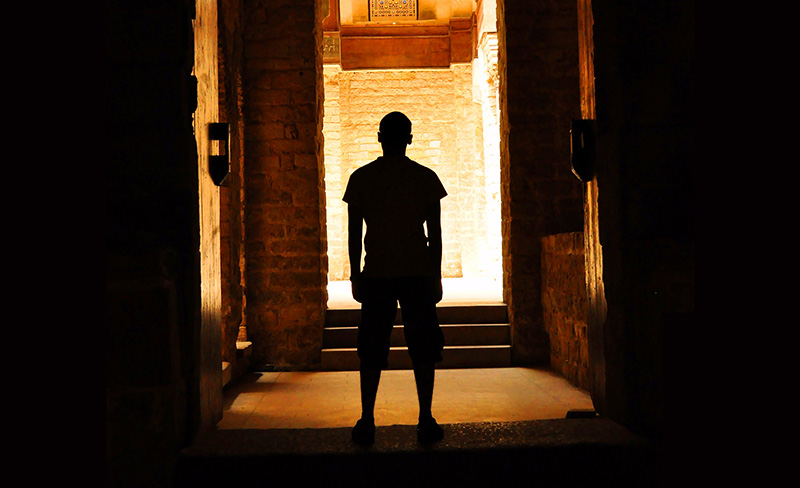 When David Perez was 11, he had two stated goals: to become president of the United States, and to meet his father. Thanks to LinkedIn, he’s halfway there.

I was in Keflavik Airport, Iceland, on January 3, 2010, feeling hollow. To remedy this, I walked over to the airport bar, sat at a stool, and proceeded to order something that might have been Aquavit. I had spent the previous five-plus hours alternating between sheer terror and fitful sleep in a seat that could best be described as skeletal. It was mid-afternoon, and night had already come. The places had changed several times in the past week and a half—Paris, New York, Philly, Boston, Reykjavik—but the persistent rush of anxiety and the details of the day were oddly consistent. Wake up, pack, sit on a cramped seat, arrive at my destination, stretch. Keep it together for a few hours by acting exuberantly. Take the first drink offered and offer a toast. Inhale, forget.

I do not know why my mother decided to tell me of his whereabouts. It doesn’t really matter. It had to happen, and I accepted it even as I effortlessly eviscerated packs of cigarettes. Things were supposed to be going well. I was in graduate school, living in Paris, toting baguettes on the Metro. It was a pleasant fiction. My latest identity—“international scholar”—was one that I badly wanted to shed.

Looking through the terminal glass, the featureless moonscape outside fit so well with my mood that I thought the coincidence to be beautiful. For the first time in my life, I understood how my mother must have felt when she was pregnant with me: too proud to tell her family of her plight; abandoned by the only man she’d ever loved; hiding her belly as she trudged around the similarly bereft landscape of early winter in Buffalo. I could not cry. It was time to board my flight, and I did not quite trust my legs to hold up my weight.

The urge I felt to clean up and get on the plane came as a surprise. I trotted to the bathroom, splashed some water on my face, and looked up. The face in the mirror was obviously worn, but shockingly clear-eyed and clean-shaven. I took a deep breath, smiled at the ticket checker, and slumped into my seat. I did not awake until we were over Paris. My first thought was that I was going to find him.

I had not given serious thought to my father in at least 10 years, but his absence was ever-present. Upon reflection, it felt as if I’d been competing with and trying to catch the attention of a complete stranger. There was a photo of him from 1981 that I destroyed sometime during college that remained in my memory—a shock of curly red hair, blue eyes, thin, the only obvious commonality between us a crooked, toothy smile.

For a long time, I didn’t really want to know anything else about him. Thinking about his absence reminded me of eating meatless Hamburger Helper, bad homemade haircuts, and coming home at three a.m. when Mom couldn’t afford a babysitter. It reminded me of the mortifying and abrupt birds and bees talk from my mother as we drove home from my grandparent’s home when I was 11, because no one else in the family could or would dare to broach the subject. She and I had suffered far worse indignities than that, but all I could think of was that feeling of utter horror in the passenger seat of that creaking Oldsmobile handed down from my grandfather. I smiled as I wept.

Should I do it?

A few nights later, I sat at my desk in a Parisian suburb, looking at my father’s LinkedIn profile. Toy Safety Expert was the description. The irony of a deadbeat having a career in toy safety registered but did not resonate. It was sometime between two and four a.m., and my feet were propped up on my still-packed suitcase. In another tab, I was hastily making my own profile. I shivered occasionally from the cold because I was too cheap to turn on the heater or the lights and too distracted to fetch a blanket. Weeks of jittery anguish and furtive attempts to forget and a few hours of combing through Google results for his name led me to a profile that had to be him—was him.

I contacted my father for the first time in my life by clicking the “Connect” button next to his name. The ludicrous nature of the moment when he confirmed the connection a few hours later made me howl with laughter. We had never met, never spoken to one another, and yet here we were, “connected” through genetic material and what I considered a second-rate social networking site. It felt a forced plot twist in a poorly written play. Chasing my father down for anything resembling a “hello” was the most undignified necessity I’ve swallowed in my life. What a farce.

I’d already burned through a pack of Lucky Strikes in less than two days, and the Tabac wouldn’t be open for another five hours. It didn’t matter because we were corresponding through email exchange now. I sent long, rambling emails about myself, about my life, about what would happen next; he responded with terse statements in a too-big font that betrayed his failing vision. It felt oddly thrilling, a contrast to the gray joylessness that was Paris in winter. The ashcans and the empty bottles of wine, beer, and whiskey disappeared from my room as our correspondence grew.

Meanwhile, the fiction that was my academic career was quickly and messily falling apart. Trying to write essays on the vagaries of diplomatic letters and IMF best practices consisted of sitting and staring at a wall of incomprehensible text for hours, then days at a time. I had nothing, and so I laughed and did calisthenics in that room and tried to cover up the signs of my fragility by strutting around Jardin de Luxembourg in a suit on my grandmother’s advice: “A mal tiempo, buena cara.” In bad times, show a good face. The swagger and pomp was good practice, I thought, for when I’d actually have to talk to him.

The facade of self-assurance lasted until I picked up the phone. The conversation lasted 40 minutes—I wrote that down—but I don’t remember it. I remember going through a pack afterward. The sensation of lying on the floor afterward, overwhelmed by the enormity and ridiculousness of it all, remains vivid. Two empty wine bottles I couldn’t help but let hang around kept me company as I stared up at the ceiling and tried to recount what had taken place. There was my mother’s voice, crying but ever proud over long distance. My father. Holy shit.

David Perez lives in New York and wears a belt that reads 'FOR SALE' in LED lights at all times. You can talk to him about anything on Twitter @ContrarioMan.

Guest
nameless, in a sense

You have lived my life. By the time I was in my 20s I was driving home from work balling my eyes out over the fact that I missed some one I had never met, and whom I wasn’t even certain would want to meet me. I drove across three states to get to the college where my father and mother attended, and there I talked my way into the library and got a copy of the alumni directory out of the hands of the reference librarian. I sent a letter. It was 1998 and no social sites, yet. He… Read more »

Yes, David. He missed out. First for his initial absence and again for his inability to recognize or embrace all that is you when the Universe saw fit to give him a second chance. But that is his cross to bear, not yours. But it is good for you to, at least, know the truth now than to wonder all your life. You know I speak from first-hand knowledge on the subject. Great writing. You’re a great guy!!!!

Thank you for telling your truth. Very good writing.

Life is so complex. What you have written is real and moving. Thank you.

Numbness is still a response. And he DID miss out. Your mom rocks.

Facebook1.8kTweet1Pin3EmailShares1.8k
wpDiscuz
8
0
Would love your thoughts, please comment.x
()
x
| Reply
Share this ArticleLike this article? Email it to a friend!
Email sent!