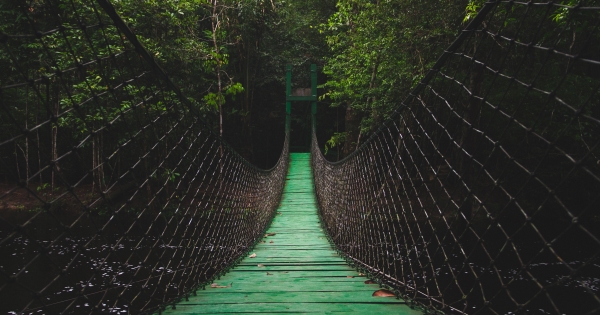 My nine-year-old son did something really brave today.

We were at a tourist attraction, and there was a rope climbing course. For $11, anyone over the height of 48 inches would be strapped into a full harness system, and then they be allowed to wander a four-story-tall gridwork of steel supports and rope bridges.

Neither my wife nor I were interested, but my son insisted he really wanted to try it. We balked at the price, but he persisted. We relented, and he paid his entry fee and got suited up.

He looked fine as they were adjusting his harness and attaching his carabiner to the overhead track. He climbed up the first flight of stairs, following a girl who looked to be a year or two older than him. She made her way off down the first bridge.

I saw him on the platform. He looked at the bridge, then he turned around. I figured, since there were multiple paths, that he was going to head off down another path instead. Maybe someone had called up to him and told him to do that.

Instead, he climbed back down the stairs and talked to one of the operators. She asked him a few questions, and he nodded. He looked over at me nervously. I asked him a question with my eyes. He smirked. I motioned for him to come over to where I was waiting, by the fence around the structure, the closest people who aren’t paying customers are allowed to come.

He got out of his harness and came over to me, and we talked. He had gotten to the top of the stairs and frozen. It had been a quick decision for him: This wasn’t going to happen.

But he was scared of what I would say. He had pushed so hard to try it. It hadn’t been cheap. After all that, he’d gotten to the top of one flight of stairs, taken a look, and that was that.

I told him he was brave. Anyone can dive into a challenge that’s out of their depth. It takes a special kind of courage to accept and admit one’s own limitations.

He had been stuck between two fearful situations. He could proceed with the activity, pushing through his overwhelming fear. That’s a lot of the message that we give boys about what it means to be a man: Overcoming fear.

Or he could abandon the activity and admit to me, his father, that he really wasn’t ready after all.

He chose the latter. I’d like to think it’s partly because I’ve created an environment where he’s safe to do that, but even so, it was still stressful for him.

I’m not saying that people shouldn’t work to overcome their fears. I’m saying that, sometimes, our fears are so overwhelming in the moment that it’s reasonable to set an activity aside. And that’s an option we often don’t give our sons.

When I was about the age that my son is now, my father, my older brother, and I went on a biking trip. My father had discouraged me from coming along. He didn’t think I was old enough. I persisted, and he relented.

Late in the trip, I make a mistake that caused me to get a flat tire. My father patched it on the side of a busy street. He yelled at me while he was doing so. I felt like a screw-up. I shouldn’t have come along after all.

We got back to biking, but shortly after that we came upon a steep hill. My father and brother took it with some struggling, but they made it. I struggled, and couldn’t make it. They shouted at me to walk my bike, but I had it in my mind that the only way to demonstrate my value to my father was by conquering that hill.

I don’t recall how far I made it. I remember that my legs ached, I remember that I felt ashamed, a total failure in my father’s eyes. I eventually gave up and walked my bike up part of the way.

To this day, decades later, I get nervous around steep inclines. I have recurring nightmares about having to navigate through complex roadways, which spiral and gaps, and I can’t make it. I was driving on some high freeway bridges today and had a panic attack that I would lose control and drive off. Formally, this is called bathmophobia, a strange name for a strange anxiety.

I don’t feel like my father had given me the space to admit to being overwhelmed without shame. I was overwhelmed: I couldn’t bike up that hill, not after several hours of biking. Maybe not even if I had been fresh.

I was too scared to admit defeat, and too weak to accomplish the task.

This is well-recognized: There are times in our lives where the best course is to stare our fears directly in the eye and work our way past them. We cannot become subservient to our anxieties.

This is less acknowledged: There are times in our lives where the best course is to realize that our fears, in that moment, are overwhelming, and that we need to take a breather, to set it aside, to push through it later.

We need room for both reactions, in the right situations. It takes a special kind of courage to recognize that.
—

Photo by Michel Paz on Unsplash

Paul, a little suggestion if you’d like to free yourself from the grip of your bike trip. Trying saying your statement in the past tense rather than the present… instead of “I get ” switch the tense but tell the truth……..I “got” or “used to get ” or “up til now have gotten ” nervous around steep inclines. …………..I have (until now…..or ” in the past” had recurring nightmares about having to navigate through complex roadways, You are truly a great dad and role model for all of us. Keep on being your self.