Get Daily Email
Join/Login CLOSE
Home / Featured Content / A Writer’s Writer: How I Unwittingly Documented My Evolution as a Man 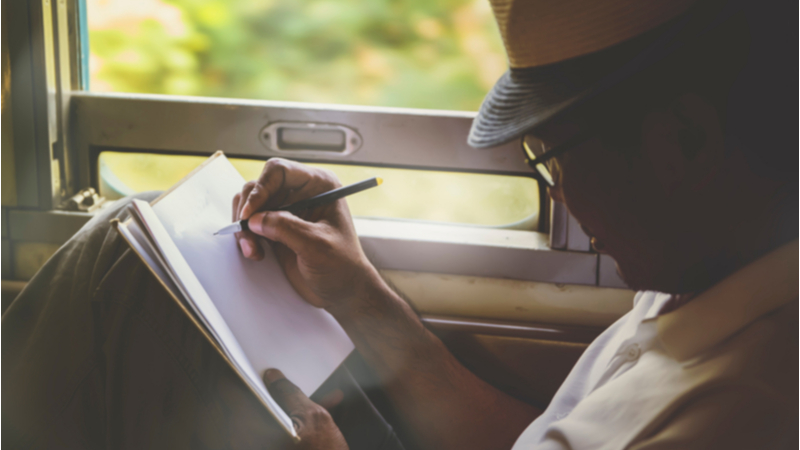 I consider myself a writer’s writer. I wrote as a young boy, but my writing practice began in earnest in 2003 at the age of 21. The Iraq War was beginning and I was headed to the Middle East as a marine. I began recording my impressions in my first journal.

I must admit, the early works were messy. The magnitude of war shaped my identity in ways I am still learning to understand. I experienced moments that changed my life in positive ways. I also struggled with mental health issues, all along demonstrating to many people that I was fine. Still, I kept writing.

The act of embracing paper and pen set me on a path that would ultimately save me.

Seventeen years have passed. Today I have stacks of notebooks with impressions, thoughts, and stories. These pages give the play-by-play account of my happiest moments as a human being, my deepest regrets, and much transition in between. In doing so, I unwittingly documented my evolution as a man.

These words—in my own handwriting—say more about my beliefs than anything I could say right now. For me to read back through them is to keep myself honest; I do not get the pleasure of pretending I always had life figured out. No, growing up is hard, and growing intentionally is even harder. Changing your beliefs or, rather, having experiences—by choice or circumstance—that challenge your beliefs can be very uncomfortable.

This is important to note in modern 21st-century society. We are subjected to more appeals for our belief, our action, and our response in a day than any prior civilization could have dreamed.

On a practical level, holding fast to a belief makes sense. Human beings crave a sense of continuity. We need connection. In my experience, a life lacking orientation of purpose can be unbearable. Our beliefs help us feel anchored. But what happens when you can clearly see that your belief was wrong? Even worse, a strongly held belief makes you suffer?

I identified such an instance while flipping through pages I wrote ten years after my experience in Iraq.

I am a man now. The only thing I am assured of is loneliness, nostalgia, and forgetfulness.

“How bleak,” I thought, recently reading this statement. I believed I was alone. Yet, I went even further. I directly equated this condition of loneliness with the state of being a man. As if somehow, I had arrived.

Today, I no longer believe this is true. I am grateful to report my outlook on life is so much brighter. With the benefit of perspective, I found something worth considering as I raise a son of my own. What messages did I receive as a young man that encouraged the belief that this conclusion was inevitable?

I thought of my father – a caring, compassionate, and generous man. He taught me tirelessly about right and wrong. I cannot blame him. He could also be hard on me for showing fear and pain. He made me watch classic American classic films, which include several starring John Wayne. Here was the model of a man. Rugged. Individual. Tough. Never back down.

Similar messages were reiterated to me in a hundred ways. Fear and pain equaled weakness. I suppressed as much as possible to gain respect. For a highly sensitive person like me, one might already see how this would turn out.

My concerted drive to numb fear and pain profoundly affected every major relationship of my life. I took dangerous risks to prove myself. Unable to express emotion, I grew frustrated and, eventually, angry. With no one to blame, I redirected the anger towards myself. What I could not absorb, I aimed at other people.

It would be quaint to say I broke out of it. That story arc would be too simple. It was very slow, very gradual. I met rejection. Then, finally, I found the resources and people who would teach me how to handle emotions in a mature way. My writing chronicles tell that tale.

Since developing an adult relationship with my father, I can better understand his goal. He is not the same person as when I was young. I know today that he just did not want to see me hurt.

The final question is: what beliefs about emotions should I pass on to my son? I understand that not everything I try to teach him will be helpful. If I am lucky, my son will never reach his early 30s feeling that loneliness is a sign that he has achieved manhood. The world will change by the time he is my age. The best I can do is to be straightforward with my son about the reality of his emotions. They are natural and normal. Neither good nor bad. Neither strong nor weak. No more. No less.

As a failsafe, I have volumes of words that tell the real story. That my son would read through every page to fully understand my story may be asking too much. I will own up to every word. As I said, I am a writer’s writer. Telling the truth of experience is what I do.

Wayne David Hubbard is an author and educator. His work appears in Button Poetry and other literary presses. His first book Mobius: Meditations on Home is available on Amazon. He lives in Virginia, works in aviation, and writes creatively about experience, history, and culture. Learn more about his work at https://waynedavidhubbard.com.