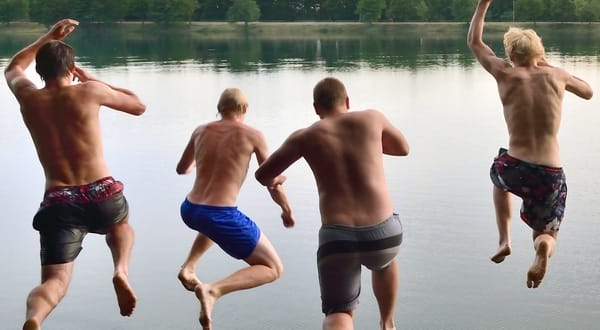 Did I mention my wife and I went on vacation last month? We made some memories, and along the way, I explored my memories of home and my youth.

It was the first childless vacation we’ve taken since our honeymoon, and really, only the second or third vacation in general. We’ve traveled with the kids more than a few times, but it’s usually been for a wedding or funeral. Those don’t exactly count as vacations.

We spent three days and four nights at Southern Oaks Resort, in Langley, Oklahoma. It’s part of the Grand Lake region and the countryside is gorgeous. We didn’t plan much to do for this trip, other than to spend quiet time with each other. We just wanted to reconnect as part of our healing.

We’d first talked about the trip during those deeply emotional discussions where we decided we didn’t really want to be divorced. Diana had mentioned at one point that even though the talks were good, they were wearing her out emotionally, so I’d suggested we take some time alone to continue the discussion. The original “plan,” such as it was, was a short weekend after fireworks season. It took us a few weeks to get around to scheduling it.

We had several options for entertainment and excursions: the Pensacola Dam conducts tours, Langley shows a Friday Night Movie in the Park, and there are a couple of stables nearby that give trail rides. There’s Grand Lake O’ The Cherokees too, of course, but I only remember enough about boats to know my port from my starboard, so I didn’t think a boat rental would be a great idea. Neither one of us are much into fishing either.

We ended up taking the dam tour Thursday, and visiting the Route 66 Vintage Iron Motorcycle Museum in Miami on Friday. We scheduled massages for Saturday, just because we’ve never had professional massages done before. Very relaxing. We checked out the resort’s saltwater pool as well as the private hot tub too.

In between? We chatted. We snuggled. We read. We talked, too. Not the deep emotional kind of exchange we’d had in July, but a gentle discovery of things we had forgotten about each other, or sometimes never known. It was fun exploring like that. 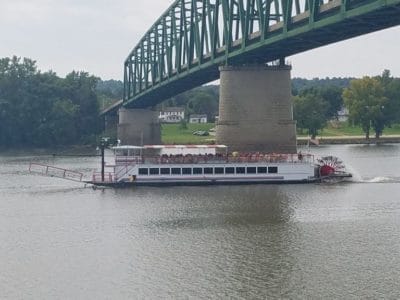 I know within about thirty feet where he was sitting for that picture. I’ve sat there many a time contemplating life, sometimes with more than a little alcohol in my system. There’s something about water that speaks to my soul. I can sit on a beach or riverbank and stare it water for hours on end, watching the ripples and waves and current as they trickle and burble and churn. Marietta had its share of floods in the spring, and the power of the water never failed to amaze me.

Later on during our vacation, as Diana and I strolled along one of the many boat ramps around Grand Lake, I told her about how much I loved being around water. I’ve always lived in a river town. Marietta, Columbus, and Muskogee all lie along rivers. My hometown lies in the Red River Valley. My ancestors lived on the banks of the Rhine. My dad loved to sail, and I’ve got some fond memories of outings on the Miss Q on Seneca Lake. My brother lives in Seattle and we took a trip around the San Juan Islands aboard his sailboat that I will always look back on somewhat nostalgically.

I’m curious though as to why I’ve never actually done much around water. I like walking along the riverbanks and lakeshores. I enjoy reading sea stories although I never quite got into Patrick O’Brian’s Aubrey–Maturin books for some reason. But none of the jobs I’ve held had much to do with the water. I briefly considered joining the Coast Guard or Navy until I realized how important it was to be able to swim. I just never quite got the hang of it. I can dog-paddle well enough, and swim a couple of lengths in a shallow pool. But I’d be in trouble if I needed to swim for a rescue or to survive.

Michigan opened its football season Saturday with its fourth win in as many meetings with the University of Florida. Many Gator fans will point out that they were handicapped by the suspension of ten players for that game, including their standout running back. I’ll point out that the Wolverines lost 10 defensive players alone to graduation and the NFL draft. Our defense looked pretty darn good for as young as it is, and our placekicker showed why he was the one of the most heavily recruited players a couple of years ago. I was pretty happy with the game overall, but I wish Speight had shown more improvement. He threw two interceptions that cost Michigan 14 points. If the Gator offense had gotten themselves in gear, that could have made a huge difference in the game.

As I settled in to watch the game though, I couldn’t help missing my dad. He’s the reason I’m a Wolverine fan; he received his Bachelors (’41) and his Masters (’46) degrees there. He’s always loved Michigan football, and often shared fond memories of his years in the Michigan Marching Band. Their tradition of marching with reversed caps after a win is something my dad claimed to have a part in. I remember the tail end of the Ten Year War between Woody and Bo, and all of the (mostly) good-natured ribbing I took for being a Wolverine fan in the middle of Buckeye country.

I’d give almost anything to hear my dad’s reactions to Jim Harbaugh’s hiring, as well as some of his new conferences and other stunts.

I’d give anything to hear my dad’s voice again.

Friday night, we spent an hour or so playing Code Names, a game Diana got for Christmas last year. She and I had played it on vacation, and thought the kids would enjoy it. They did. One of the clues led Diana down a Kenny Rogers rabbit hole that forced me to pull up a Kenny Rogers playlist on YouTube. That included for some reason John Denver’s “Country Roads,” which brought back bittersweet memories.

My dad not only taught at Marietta College, he directed the College-Civic Symphonette. They played numerous concerts each year, including Handel’s Messiah and the Williamstown Pops Concert. The Pops Concert was a fundraiser for the Williamstown High School Band. The band boosters would set up tables in the gym and bake a bunch of goodies. They printed simple menus/order slips, and the band members would wait on the tables. Yes, it was a glorified bake sale, but with great music. The playlist was usually fairly light, hence the name “Pops Concert.” Think more movie overtures and contemporary composers rather than full Beethoven symphonies.

Because Williamstown was in West Virginia, the traditional encore was Denver’s “Country Roads.” The orchestra would play through one verse, then Dad would turn from his podium and cue the audience, and together they’d sing and play the entire song.

The Pops Concert was the only time in 29 years I performed with my dad.

I’m often pretty hard on myself about my younger years. I was stubborn, headstrong, and naïve about so much. I’ve got lots of regrets about my childhood, but I think my biggest one is not doing more musically with my Dad.

One year, Mom had been in the Oratorio Chorus for Messiah, and that year my brother had been the page-turner for the harpsichordist. I was too young to do anything useful that year, and when I was older didn’t have the urge to sing, so I never joined in Messiah (although one year I helped with the television production).

But in 1985 or ’86, Dad needed a percussionist for one reason or another. I tagged along to one rehearsal and decided it’d be fun. I recall we performed “More” from Mondo Cane, along with “Colonel Bogey March,” popularized in the movie The Bridge on the River Kwai. I’m sure we did five or six other pieces, but those two stick in my mind, along with “Country Roads.” That song always reminds me of home, and my Dad.
—