Get Daily Email
Join/Login CLOSE
Home / Featured Content / Am I Guilty of Being a Helicopter Parent? 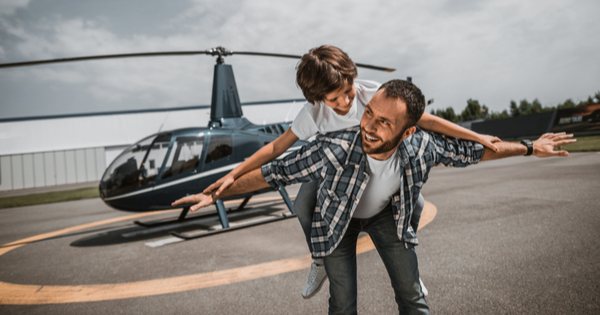 As a parent I often question my words and actions towards my kids. I wonder whether they’ll achieve the desired result. The basis of everything that I do as their Dad is intended to raise kids into adults who will go on to be happy, functional and contributing members of society. I also want them to be well equipped to get what they want out of life.

Things happen from time-to-time that place my entire operating model as a parent into doubt. Events of the last few weeks have caused one such period retrospection and I’ve reached an uncomfortable conclusion:

I am guilty of being a helicopter parent.

Anyone who knows me personally, or who is familiar with my family circumstances through my writing, will hopefully attest that I’m a devoted father. I’ve raised my daughters from my first marriage co-operatively and equally with their Mum since we divorced over 12 years ago. I’ve since remarried and my second wife and I have a blended family of six. I live my life split between two locations with half the time as live-in parent to my kids, and the rest of my life in the family home with my wife and step-kids; this facilitates an arrangement known as birds-nest co-parenting.

The details of this arrangement are superfluous to this story but I provide the overview to demonstrate that in my world, kids come first.

This has been the basis and foundation of my value system for most of my adult life and yet of late I wonder if my approach to being a Dad has enabled me to raise my kids as well as I hoped it might.

Perhaps, instead I’ve done them a disservice?

Then I read 10 Common Mistakes Parents Today Make (Me Included) published by The Good Men Project and it’s reinforced that many of my actions and decisions as a parent may not have prepared my kids for life in the real world as well as I intended.

The writer of this excellent piece, Kari Kubiszyn Kampakis cites a growing phenomenon amongst young adults to feel depressed and despondent about life in spite of them having enjoyed a happy and supportive childhood, free from drama, disappointment or tragedy.

With my eldest daughter turning 20 this week I can attest to seeing this phenomenon emerge in real-life.

It’s been a cause of great worry and frustration at times, to witness episodes of anxiety, depression and stress in her late teens and since she notionally left home to go to university. I don’t want to paint an overly bleak picture, and she’s achieved great things for herself, carving out a successful and fulfilling life for herself to-date, attending an excellent University, studying overseas and demonstrating great discipline, self-resilience and focus in doing so.

I’m aware at times though that she finds life more of a struggle than she should. Things that seem trivial and inconsequential to an outside observer can often knock her progress sideways. She occasionally struggles with the notion that life is a process of trial and error, an endless repeating cycle of chaos and order that drives us as humans to learn, grow and adapt as we advance in life.

I’ve learned this myself through the adversities that I’ve encountered and the difficult times that I’ve endured along the path to successes and advancement. I understand the need to repeatedly face into my challenges, to confront my struggles and to operate outside of my safe and secure comfort zone if I’m to get anywhere in life; how can it be that I’ve not equipped her to do the same?

The answer to this question is presented in the aforementioned article, and when I read it this morning, it immediately struck me as truth:

“…parents today are too quick to swoop in. We don’t want our children to fall, so instead of letting them experience adversity, we clear the path. We remove obstacles to make their life easy. But adversity is a part of life, and only by facing it can our children build life-coping skills they’ll need down the road.” — Kari Kubiszyn Kampakis

When our kids are born our natural instinct is to keep them safe from harm. As a new father I recall feeling the weight of the world upon my shoulders as I contemplated the joint responsibility for sustaining the life of my newborn daughter. Hour-by-hour and day-by-day I learned the skills necessary to take this in my stride but as the years have passed, the challenges have merely changed rather than let-up completely.

As they grow up, we parents have to grant them ever-more freedom and responsibility but it has never felt easy to do so. I still find it difficult to not leap into a mode of providing solutions and help when my kids bring problems to me. I’m learning now that in taking this approach I may have been doing them a disservice.

It’s easy to pick apart any well-meant gesture that I’ve made towards her and identify the ways in which it was doing her a disservice, but that’s not my point. I know that as a parent I’m doing the best I can with the best of intentions. To berate myself endlessly is futile, but this week has given me a reason to reconsider some of the ways in which I support my kids.

The question I now find myself considering is in how to adapt my parenting such that I give my kids a better chance of avoiding becoming “teacups” (a term from Kampakis’ article, used by college deans to describe freshmen who demonstrate fragility in the face of minor problems).

I’ve been aware for a while that I may have spoon-fed a few too many solutions to her problems on many occasions. In some areas of life, I’m already trying to amend my ways. In other areas I’m still figuring out how best to get the lesson across.

Here are a few of the opportunities I see for doing things differently:

I need to let my kids fail at things occasionally to learn that they’re not always going to get what they want, or find things easy. I maintain a desire to support them as best I can, but we humans grow and progress by overcoming adversity and by employing the lessons yielded by failure. It’s essential to treat failure as a source of learning rather than something that must be avoided at all cost. I cannot be the cavalry that always rides in to save the day, as much as I might like to be.

They need to understand that there are others in the world who will be better at something than they are. It’s unfair to try and shield them from this reality of life, and to continually tell them that they are special snowflakes who can do and be anything they wish. There are simply those in life who have more talent, greater tenacity, a better support network or a better chance of succeeding due to environmental factors than they do. Success is not brought about by pure will alone, nor will our kids benefit from believing that they can manifest anything they desire purely because they are who they are.

They must understand that life doesn’t always unfold to expectations or on-demand. I spent many years thinking of my life as a linear process that would conform to a script or story, bringing about gradual and continual progress. I’ve learned that this was a pipe-dream and that in fact, life unfolds as a direct consequence of the things we do and the actions we take, as well as due to many external factors completely outside our control. There is no script and regardless of what you expect it’s highly likely that reality will be completely different.

They need to learn that there won’t always be someone there to bail them out when things go wrong. This has been a particularly hard one to learn and employ and it still feels uncomfortable to implement. When we have the means as parents, and sometimes even when we don’t, it’s hard to resist providing the solution when asked for it. We simply cannot be there all the time, on hand to remove them from a difficult situation when times get tough.

They must enforce their own discipline and tackle the unpleasant, mundane and unrewarding tasks voluntarily because they need to be done and are the right thing to do, not avoid them in the hope that someone else will step in on their behalf. I’ve had mixed results with this to-date, but can attest that discipline and self-responsibility don’t come about in our kids merely through enforcement, brow-beating or nagging. The lesson only sinks in when they learn for themselves how badly things go wrong when they let their standards slip and get into a mess.

They have to learn that they’re not infallible, indomitable or invulnerable by experiencing how badly and quickly things can go wrong. Most scary as a parent is to consider your kids being subjected to the dangers inherent in the world. When my daughter decided to go to University overseas aged 18, it meant that she had to be responsible for her personal safety and protection. She’s learned this many times over and no amount of me worrying or checking in on her will absolve her of the need to take care of herself.

It still feels uncomfortable as a parent to consider actively allowing failure, hardship and difficulty to play their part in the lives of my kids. My instinct is to leap to the rescue and to smooth the path where I can.

I’ve known for some time that I’d be doing a disservice if I continue to intervene each time they have a problem or risk failure. I won’t be around for their entire lives, and while I still lean on my own parents for support and guidance occasionally, I’ve learned that the greatest joys and the most rewarding accomplishments come about when I’ve taken obstacles in my stride and triumphed over them. The most enjoyable successes are those that have been preceded by failure after failure.

I need to pass on that joy to my kids, and if it takes for them to fail a little along the way, I need to let them learn that-that’s okay. It may seem uncaring, but I now see it as the most responsible thing I can do as a parent to equip them for the realities of life.

Toby Hazlewood is a writer, parent, husband, project manager and in his spare time, cycling enthusiast. He is passionate about helping others to overcome the challenges he’s overcome, by sharing the things he's learned along the way. He specializes in topics including parenting and life after divorce. You can find out more about his latest projects or just say hello at tobyhazlewood.com.