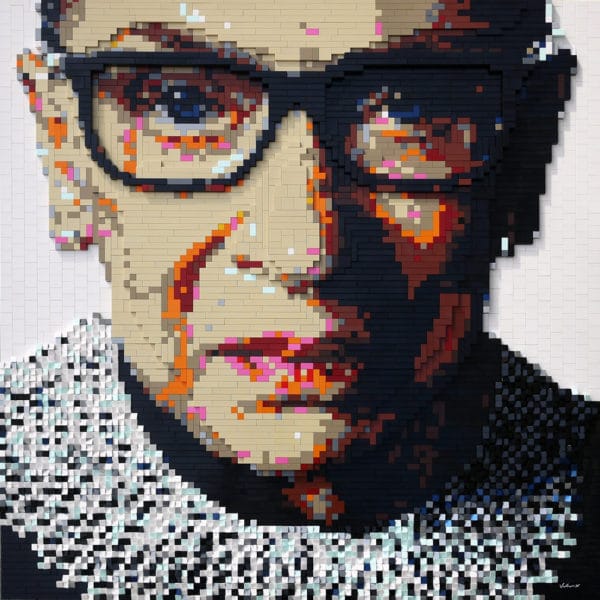 Andre Veloux is a British artist who currently resides in Princeton, NJ with his wife and daughter. His artistic work, which is created entirely from Legos, focuses and draws upon feminism, gender equality and women’s rights and is constantly exploring the ways in which women are viewed and treated and the expectations and demands that are relentlessly placed upon them in their daily lives. Near the tail end of his latest show at the Krause Gallery in New York City, I was able to interview him about his work, his motivations, and about our collective future together as men and women in this society. This is part two of that conversation.

JMA: How did you come to decide to use Legos as your artistic medium and what do you think its significance is in relation to the subject matter of your art?

AV: I was first attracted to my chosen medium of Lego because of its limited yet consistent colour palette as well as its physical properties. It is hard, durable and tactile, and can be taken apart and reconstructed as needed. The ability to build layers and structure into wall hanging works was a natural progression. I then developed a methodology that doesn’t have paint strokes or lines. Instead my work uses pixelation and blurring effects to present the images in a less defined way.

I find that my audience are also fascinated by Lego as an artistic medium. The use of these small, plastic bricks that many people have lying around their homes immediately resonates with them.

Artistically, I enjoy the changeability of my artworks. Whatever I’m depicting (objects, figurative art, or portraits) can be taken apart and rebuilt, just as we create and model icons, objects and especially our own image in our ever-changing society. The plasticity of the bricks seems appropriate to the modern world. The standard dimensions of the bricks are perfect for pixelation, and in my Consent-themed artworks I use blurring technique to deliberately avoid being definitive. I’m not presuming to answer my own question. I want the viewer to form their own opinion about what they see and think. I believe that presenting my work without comment is the best way to see if this leads the viewer to make judgements that are their own. They find the image they see by reflex, but as they linger, they may begin to see more, see something different, see another possibility.

JMA: In what way do you think gender roles oppress women?

AV: The traditional role of women as the providers of service in their gender role is hugely oppressive. As I mentioned earlier from domestic and sexual slavery to violence against women, every step of the way the presumed gender role for women is the servant serving under punishment of violence. The power and control lies with men, the roles are designed to reinforce this. The gift of women to birth our future generations has been used as a tool with which to enslave them.

JMA: How do you come to support the HeForShe organization and how important do you think its work is?

AV: I was very excited when the UN started HeForShe, I think it was a pivotal moment. It certainly helped me think of feminism in a more global and intersectional way. Women needing basic healthcare and reproductive rights in Africa is just as important as women fighting for senior roles in the US. The HeForShe movement had the specific and necessary goal of bringing men into the conversation, in a role to support women rather than leading the conversation. No-one needs to listen to another panel of white men discussing diversity. HeForShe enlisted an impressively influential and diverse number of ‘male global champions’ who made concrete commitments to equalizing social, economic and political opportunities for women and girls in their companies and communities and be held accountable against those commitments. This goes beyond just claiming to be an advocate, this is walking the walk.

Viewers of art bring with them all kinds of preconceived ideas into what they see. Ideas about both what is being depicted and what the artist intended and even so far as what the artist believes.

For example, as I mentioned my series of anti-portrait pieces are aiming to highlight that women are seen as the bearer of sexuality: the female figures are depicted showing their backs, emphasizing their vulnerability. This position facilitates the voyeur’s objectification and sexualization of the model. Quoting Laura Mulvey who summed it up succinctly as “woman still tied to her place as bearer of meaning not maker of meaning” in her seminal essay Visual and Other Pleasures. I want my modern-day audience to study the image for cues that justify this treatment. If the viewer sees this, then why is that? Rather, the women can be seen as strong and independent human beings if the viewer is so inclined.

JMA: What is one thing that gives you hope for our collective future?

AV: Men have ruled and dominated every aspect of our lives since the beginning, and things have not worked out nearly as well as we would have liked. I think we are due a change of leadership at the top.

JMA: You once said that “Art should be at the forefront of change in society; at its best, it raises important questions and becomes part of the process of change.” How do you feel your art follows this maxim?

AV: I do want my artworks to create a dialogue. I really believe I have gone some way to achieving that, as I have mentioned already about how people see it.

Building relationships, showing art in galleries and public spaces and being clear with my artistic statement is one way I have looked to achieve this, but moving further into the process of change, now my live art workshops provide the opportunity to engage directly in discussion and challenge perceptions of gender and equality.

I recently produced and delivered an event where other people get the joy from building and creating one of my artworks. I worked in partnership with Princeton University in early 2019 to develop for them an artwork on the ‘question’ of sexual consent. We orchestrated everything so that the students could build the artwork themselves in a single day; working in pairs they were asked to practice consent between them as they worked. We filmed the event including a time lapse and later interviewed the participants. I am looking to roll this out to other institutions using this Consent dialogue as well with corporate partners with works to discuss issues of diversity.

JMA: In this current era of Trump here in America, why do you think it is so important for men to speak out about women’s issues?

AV: When the President of this country is a known sexual predator with a litany of misogynist acts and attitudes to his name. When the election of that man lays bare the systemic misogyny of a developed country which purports to have a functioning democracy I think every man should wake up and say this isn’t working for everyone.

I attended an event where Tony Porter of the organization A Call to Men said to the assembled audience in relation to what he called an epidemic of violence against women, “if women could stop this on their own they would have done so by now.” While we are clearly unable to give women the power to stop this, then it is up to every man to stand up, join with them and say this has to stop.