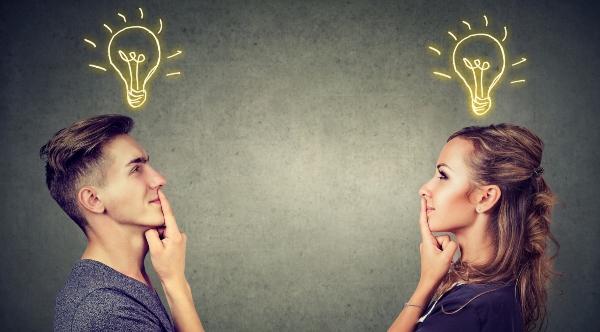 Do the genders have different brains? Turns out, the question isn’t so easily answered. The answer is as changeable as our brains. And it depends on how you measure the differences. A recent book, Gender and Our Brains, by Gina Rippon examines the issue.

The question of male and female brains has become more complex over the years as our understanding of gender has evolved. For this reason, Rippon states clearly in the beginning of the book that she is talking about gender differences, which are those that relate to socialization issues, not those that have to do with biological differences of sex. She states that the social pressures assigns to gender, inherently cause a female and male brain to develop differently.

Physically, the differences have been harder to prove. One thing that been shown is that male brains are larger than women’s brains, as men tend to be larger than women. For most of the 19th century, this was the focus of research and was the basis for showing women’s inferiority. The study of craniology was used to measure skulls and had complex formulas to measure brain capacity.

A Huge Leap in Technology

In 1992, with the development of functional magnetic resonance imaging (fMRI), the focus changed to what parts of the brain were different in men and women. Scientists could see what areas of the brain were activated as certain tasks were performed and cognitive neuroscience was born.

By 2012 more than 1,500 studies a year were being done using fMRI and many were looking at gender differences. Books like Why Men Don’t Listen and Why Women Don’t Read Maps were creating new ideas about how gender influences brains. One book, The Female Brain, repeated research that was reprinted a number of places, but never proven to be true, about the verbal area of the brain being larger in women than men and the number of words spoken in a day by each gender.

These books and studies reported in the press were part of the hype of the new technology. In her book, Delusions of Gender, Cordelia Fine, discusses this neurosexism and how scientists were finding evidence to support long held gender beliefs about men and women.

For example, in one study where men and women looked at images that would elicit a fear/disgust reaction, it was reported that women had a greater emotional reaction. However, men had greater reaction in the emotional centers of their brain, but were less verbal about it. Also, many of the pictures could have been construed as aggressive, which activated a different part of the brain in men.

Moving on to the Plastic Brain

In the 21st century, as technology has continued to improve, scientists are now able to see neural networks in the brain and even how those networks are changing and reaching out to each other. As scientists have grown to understand how our brains change during our lives, even seeing differences in the brains of a piano player and a violin player, it is hard to not see how the brains of the gender would be different based on life experiences and societal expectations and norms.

Gender and the Brain raises lots of questions, but only time will tell if long-held beliefs coupled with new technology will lead to new understandings about gender and our brain.