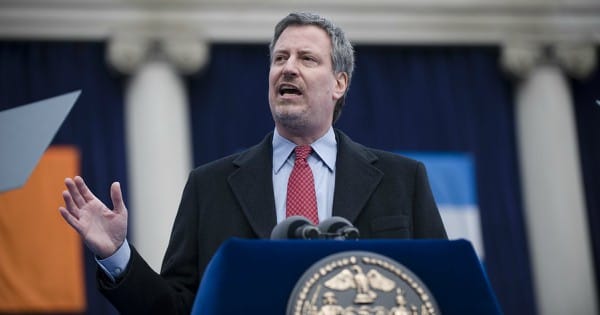 Bill di Blasio is a complicated guy. A complicated guy to write about anyway. Mostly because he is so new to the crowded, confusing field of candidates I had to research everything. Research takes time, even now. What I found was impressive. He has some real liberal chops.

Admittedly, being the mayor of New York, with its enormous budget, fractured and unique population, and a police force the size of a small army, would offer some on the job training. New York has a larger and more diverse population than Colorado, Montana or Washington, and the governors of all three states are democratic candidates for President. If the current administration has offered any lesson at all it is experience counts for something.

As Mayor of the biggest city in the country de Blasio managed to launch a universal preschool program. There are now 70,000 children enrolled. That number is up from 19,000 in 2013, the year he was elected. It may have been the most important act of his time as mayor. Educators are almost unanimous in their support expanded preschool. It has benefits that may take years to come to realize. But, it is the simplest, most profound measure society can take toward improving education. It shouldn’t be the last, but it probably should be one of the first.

In another highlight film moment de Blasio raised the minimum wage for city employees to $15.00 an hour. A move that many people feel is long overdue nationally. “The fight to raise the minimum wage is about more than a number– it’s about fairness and the dignity of work. No one who works a full-time job in this country should have to live in poverty”   Then US Labor Secretary Thomas Perez said in response to the move. Further, according to endhomelessness.org there is no state where a person working full time and earning the national minimum wage can afford to live in a one bedroom apartment. Something has to be done.

In a bold move that is sure to anger another New Yorker running for president (Trump) de Blasio is proud of New York’s status as a sanctuary city. He labeled the other New Yorker’s (Trump’s) order to detain Muslim travelers as “abdication of American values.”. Further, he proposed a series of reforms to assist immigrant entrepreneurs find and receive the assistance so many small businesses rely on through their early years. Many times they aren’t aware help is available, or they just didn’t know where to start. He proposed issuing universal city ID cards to New Yorkers, including undocumented immigrants. These cards would allow them to open bank accounts. Moreover, it has the potential to improve relationships with the police. Often immigrants are afraid to report a crime for fear they will be deported, but having a city ID carries at least some magic.

“And I want us to salute an organization that was started in New York City and has helped millions upon millions of women. Let us thank, let us praise, let us embrace Planned Parenthood. Thank you.” This is excerpted from a speech de Blasio gave at a Planned Parenthood rally to “Stop the Bans.” There are few candidates, at least candidates who aren’t female, who are as staunchly pro-choice as Mayor de Blasio.

There have been accusations of campaign irregularities, none of which have led to charges. But, they are there. And, 75% of New Yorkers don’t think de Blasio should be president, but he is a second term mayor, the first democrat to accomplish that in 32 years, so you have to balance the two statements.

If you are looking for a progressive, with a lot of left of center ideas Bill de Blasio is a good choice. He is also a seasoned politician who knows how to compromise to achieve an end.  Of course he is a long shot. Plus, if the Democratic Party hasn’t changed since 2016 he might have no shot. If that’s the case you might as well get out your Biden for President Buttons and give up your dreams of having any real choice.

Postscript to Considering Joe Biden; In a bold policy Statement Joe Biden announced a new Education Policy, well maybe not completely new, I still have to look into it a little, but a real policy. The cornerstone is increasing teacher pay, and unlike so many education policies that have come from DC in the last half century it is funded. A nice change.

Don’t forget to meet Michael Bennet and Cory Booker while you are here!

By The office of Public Advocate for the City of New York -https://commons.wikimedia.org/w/index.php?curid=31473335