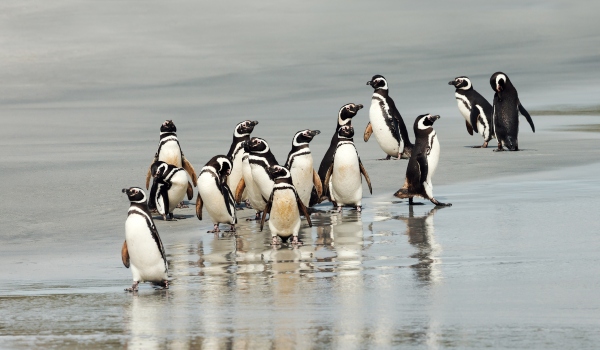 Climate change may be about to set a trap for African penguins and send them foraging for food in places that the fish have departed, according to satellite trackers.

And it could multiply fourfold the risk of death from thirst among America’s desert songbirds, says a second team of researchers.

But migratory hawks, the hunter-killers of the avian world, may be able to adapt to the growing mismatch between historic range and potential prey, according to a third study.

Climate change – driven by global warming fuelled by the prodigal combustion of fossil fuels that spill greenhouse gases into the planet’s atmosphere – creates problems for many species.

This is true even in countries such as the US that pioneered steps to conserve wildlife, and the UK. And those birds that breed in one climate zone and winter in another could face hazards in both regions.

Because of such shifts, juvenile African penguins are now hunting for fish in the wrong places, according to a study in Current Biology journal.

Scientists used satellites to track 54 newly-fledged juveniles from eight colonies of what was once known as the jackass penguin (Spheniscus demersus) in southern Africa.

The young birds did what they had evolved to do: they looked for cool waters with high chlorophyll levels, because that is normally a sign of plankton, and fish that feed on plankton.

“The penguins still move to where the plankton
are abundant, but the fish are no longer there”

But climate change and industrial-scale fishing now mean that fish stocks are depleted, and the young birds are swimming thousands of kilometres toward what biologists call an ecological trap.

The African penguin is already listed by the International Union for the Conservation of Nature as “endangered”. Now even fewer juveniles are surviving.

“The penguins still move to where the plankton are abundant, but the fish are no longer there,” says Richard Sherley, Leiden Conservation Foundation research fellow at the University of Exeter, UK, who led the study. “In particular, sardines in Namibia have been replaced in the ecosystem by lower energy fish and jellyfish.”

Climate change, which is predicted to increase the number, length and intensity of heatwaves, presents a different kind of challenge for the desert passerines – small perching birds that have adapted to the hottest and driest regions of the southwestern US.

Researchers looked at the link between heat extremes on an hourly basis, the rates at which water evaporates, and at the physiology of small birds – which lose water faster than bigger birds.

They report in the Proceedings of the National Academy of Sciences that if the world gets another 4°C warmer, potentially lethal conditions could occur four times as frequently as they do now.

This does not promise well for the smallest, the lesser goldfinch, which now faces lethal dehydration on average seven days a year, but could, by the century’s end, risk death from thirst 25 days a year. In extreme conditions, such birds can survive only two hours without water.

The researchers suggest that if the cactus wren, the lesser goldfinch, Albert’s towhee, the curve-billed thrasher and the house finch are to survive in the deserts of Mojave, Sonora and Chihuahua, conservationists need to start thinking about conserving vegetation and sources of open water.

“These estimates suggest that some regions of the desert will be uninhabitable for many species in the future, and that future high temperature events could depopulate whole regions,” says one of the authors, Blair Wolf, professor of biology at the University of New Mexico in Albuquerque.

And the lead researcher, Thomas Albright, assistant professor in the Laboratory for Conservation Biogeography at the University of Nevada, and colleagues have a wider message for everybody who burns coal or uses gasoline.

They write: “This study provides further motivation for limiting the magnitude of climate warming, because there is already evidence that the majority of high temperature extremes are attributable to anthropogenic warming.”

But a third study is a reminder that sometimes it is difficult to make sense of data, especially about migratory birds.

A count of raptors found that the population of red-tailed hawks had fallen at 43% of the usual migratory sites. But a separate count, made in winter, showed that numbers were on the increase at 67% of the usual places, scientists report in the journal of the American Ornithological Society, The Condor.

The inference to be drawn is that the birds are coping with climate change by altering their behaviour.

“The results suggest that red-tailed hawks may be responding to climate change, land use change or other environmental changes by migrating shorter distances or becoming year-round residents,” says the research leader, Neil Paprocki, a conservation biologist at Hawkwatch International. – Climate News Network