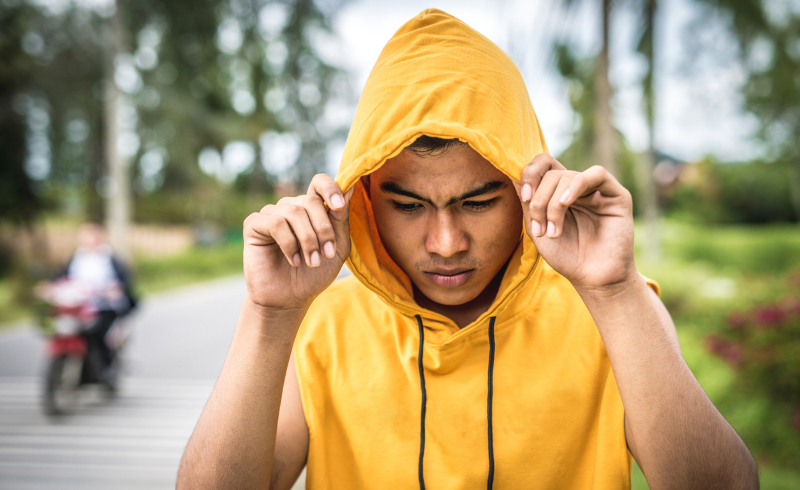 Dr. Bill Cloke has seen the damage shame can do in men’s lives, but this cycle can be broken.

“Shame is the most powerful master emotion. It’s the fear that we’re not good enough.” Brene Brown.

When Jake began therapy, he came to his sessions on time and immaculately dressed. As he spoke, he would whisk away imaginary lint while sitting ramrod straight. He described his friends as somehow beneath him and was frequently angry toward his co-workers for being incompetent. But as we teased out his thoughts, it emerged that he was even more intensely critical of himself.

After some time we were able to define his psychological state as shame, because his sense of himself was that he was to blame and it was because he was deficient. This feeling of inadequacy caused him to compensate for his deficiency by trying to be perfect, and when that failed (as it always did), it led to self-criticism, which triggered anxiety and depression.

For Jake, shame was his response to the emotional distance he had experienced from his parents. His father would give him tasks to perform around the house, painting, fixing and even making things—but he was too young to accomplish these tasks effectively and would not do them the way his father wanted him to. He would become angry and criticize him, lecture him and then withdraw with a sense of disappointment that was particularly painful to him.

His reaction to his father was to criticize himself with harsh words like “You’re so stupid.” He became quite anxious as a result, always fearing his displeasure and rejection. His self-criticism divided him between his true self and the hostile self-attacking side of himself. The constant threat of internal attack heightened his anxiety and fed his depression.

The challenge for Jake was to unravel his shame cycle, not only to ease his personal pain but to neutralize the toxic nature of it so his anxiety and depression could be alleviated.

We started with self-criticism because it gave us direct access to his shameful feelings. He told the story of his abusive father and alcoholic mother. He realized that in his self-criticism he was mouthing some of the very same words his father used as he felt the pain of his tyranny and then the sting of his mother not being there for him. The intensity of these experiences only infused his agony with self-loathing. He blamed himself.

Jean-Paul Sartre, the French existentialist, once said, “Experience precedes essence.” What he meant was that who we are is formed out of our experiences, and that idea is one of the most important tools that we can use to unravel the hold of shame. How these deeply felt processes are formed is complex and powerful.

Shame is derived from the Old Germanic word “skem,” which means to cover or to hide. Because shame is so hidden, it often requires another person to help us see it for what it is: a child’s response to the failure of the parents to be empathic, to see from behind the eyes of their child. Shame is always in the eyes, the windows to our soul. When people feel ashamed, they won’t look in our eyes because they don’t want to expose what they need to keep hidden for fear of humiliation or rejection.

Where does shame come from and how does it form into a cycle?

Shame is different from guilt because it’s about who we are, not what we do. Because shame is an identity, it makes us believe that we are inherently weak, worthless, inadequate or bad. It feels like our shame is in every cell of our body. A way to understand how guilt and shame operate together is this: We do bad things and we do them because we are bad. Guilt is the bad thing we did and shame is the belief that we are fundamentally and essentially inadequate, worthless, weak or bad.

Children cannot determine that their pain is caused by an experience outside of themselves; everything is about them, good or bad. It can’t be about their parents who may be hurting them because they need them too much. So they idealize their parents and turn on themselves, taking their pain on as if it’s their fault.

Perfectionism, which is a response to feeling deficient, accomplishes two tasks simultaneously: it is an effort to bring distant parents or others closer but also to avoid being punished, criticized, judged or blamed. We develop a profound sense that there is something missing; that we are flawed and we must fix it or hide it. This sense of deficiency is affixed in our minds from these experiences and then operates from a different part of the brain than our thinking and conscious awareness. It is often so locked away that we may spend our whole lives not really knowing what our shame is doing or what effect it is having on all our important relationships.

This condition also brings a sense that we are fraud, constantly playing the role of being a perfect person and therefore always feeling isolated. The first step toward healing our shame is to become conscious of it. Only then can we embark on the journey toward actualizing our true self.

When children feel lonely, bad, worthless or weak, it scares them because their brains interpret it as if their survival is at stake. In this way shame associates itself with the fight-or-flight part of the brain known as the amygdala located in the hippocampus part of the corpus callosum. The amygdala has to do with emotion, emotional behavior, rage and motivation—processes that are not available for conscious thought but appear automatically in our minds seemingly out of nowhere. They can only be emanating from the part of our brain that wants to protect us from abandonment and the fear of death. Shame too operates from this island within the self and, when stimulated, will develop defenses to ward off the fear of and the possibility of humiliation and/or irretrievable loss.

What then to do with this very powerful set of feelings and beliefs?

Shame experiences are too painful to be included in our sense of self. They remain hidden, floating like phantoms in our psyche, and, when stimulated, come pouring out in a rage or are converted into defenses against feeling ashamed. Those defenses can operate as: projection, grandiosity, devaluation, obsession, displacing onto others, intellectualization, denial or splitting off from shame as in passive-aggressive behavior.

These are but a few of the ways our mind protects us from harm. When all else fails and the throbbing shame becomes too great and unremitting, it causes people to use alcohol and drugs to ease their unrelenting anxiety and pain. Alcohol and drugs mask the symptoms but don’t treat the cause.

The shame/perfection/self-criticism/anxiety/depression cycle can contain other components like procrastination (which is linked to self-criticism, if we are going to criticize the outcome then why start?), low self-esteem, obsessive compulsive behavior, social phobia (or the fear of humiliation), self-loathing, and the fear of failure or success. We can only be anxious about failure if we essentially don’t trust ourselves.

Other symptoms of the shame cycle are: envy of others, self-doubt, lack of sexual desire, taking things personally, unrealistic expectations, pessimism, self-loathing, idealization and subsequent devaluation of others when they fail to live up to our ideal for them. Shame issues can be so pervasive that they can encompass our entire world.

The only way to affect shame is to consciously work on it through a process of shifting from our negative thoughts and feelings to a true sense of what is real, who we are and what is actually happening with others in the world. Anais Nin writes in her book Why Men Fall Out of Love, “Shame is the lie someone told you about yourself.”

Here are some truths about shame to begin understanding how it works.

Unraveling the shame cycle takes time, but our sense of ourselves as adequate and confident can be built. Shame never entirely goes away because it is linked to experience. We cannot change our experience but we can change our relationship to it. Shame is essentially irrational because it’s not true, it’s a myth that we believe to be true. How can we be deficient? We would not think of a tree, a deer or any other life form as fundamentally inadequate; why should we define ourselves that way? When we look at shame that way it doesn’t really make sense, and the truth is, it doesn’t.

As Jake embraced his shame and kept it front of him so he could see it and work it through, it helped him to define himself in a true sense instead of the distorted myth that he was living with. As he shifted toward a realistic sense of himself he was able to be more compassionate and empathic with his friends. Through this process he relieved some of the intensity of his shame cycle because he could consciously deconstruct what was happening inside.

As he worked through his shame he was able to more easily shift from needing to be perfect and then criticizing himself to a desire to do his best and knowing that it was good enough. His anxiety and depression eased and he found happiness in interests that he developed.

Ultimately, shame is like a block of granite that we chip away at until it becomes so small that it no longer affects what we do or how we think.

Dr. Bill Cloke has worked with individuals and couples’ for 30 years. He received a master’s degree in education from the University of Southern California and holds a Ph.D. in psychology from California Graduate Institute. A frequent talk-radio and tv psychologist, he is also a contributor to PsychologyToday.com, Care2.com and other popular websites and has lectured at UCLA. Bill Cloke lives with his wife in Los Angeles. Bill's book Happy Together has won the Nautilus and Benjamin Franklin Silver Awards for 2012. To learn more about Bill Cloke, and for more resources on creating healthy, happy relationships, visit his website.

Thanks for posting such an astute article on the workings of shame and how it becomes internalised. I do however disagree with the statement that “shame never entirely goes away as it’s linked to experience”. It is essentially a mistruth, as Anais Nin’s famous line “Shame is the lie someone told you about yourself” aptly describes. There is also the consideration that the emotion of shame can be carried from another person; classically, in the way children internalise outer experiences. If it is not a truth about the person or child, it does not belong with them and therefore can… Read more »

Trying too hard, but always ending up doing the wrong things and not being good enough…

FacebookTweetPinEmailShares1.1k
wpDiscuz
2
0
Would love your thoughts, please comment.x
()
x
| Reply
Share this ArticleLike this article? Email it to a friend!
Email sent!