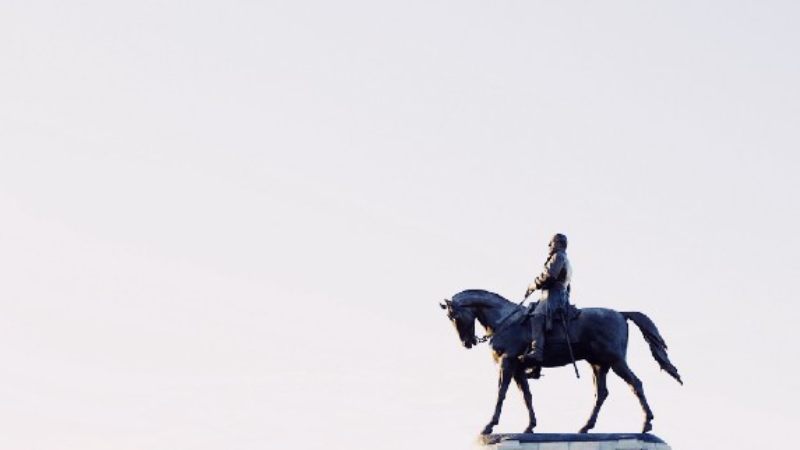 In the wake of this summer’s racial justice protests, talk has turned to removing Confederate statues and monuments around the country. These monuments are symbols of America’s racist past, built largely in the first decades of the 20th century as symbols of white supremacy.

Removing monuments that celebrate our country’s racist past makes sense, of course. We ought to be memorializing those on the right side of history, not those glorifying the wrong side of it.

But I’d like to offer an alternative plan for some of these statues.

What if, instead of hiding our country’s ignoble past by simply removing these statues, we retained some of them — but forced them to face the weight of history. What if we turned them from heroes valiantly riding alone into the sunset into tableaus, truer stories of what actually happened.

We might, for example, take statue of Robert E. Lee outside the Virginia State House off its pedestal and surround it with a family of slaves, representing the Confederacy’s human toll. We might face him down with a formidable enemy, like the former slave Sgt. William Henry Singleton, who helped recruit 1,000 former slaves to fight for the Union cause. We might surround him with figures of the moral resistance, like Frederick Douglass, Abraham Lincoln, or Sojourner Truth, leaving him alone to face the hard gaze of history forever.

Why, after all, is the Vietnam Memorial so powerful? By any most accounts, the Vietnam War was one of our country’s most appalling moral catastrophes. Three million Vietnamese civilians and fighters, along with over 58,000 American soldiers, perished in an unwinnable war that left an indelible mark on a generation. Yet no one is recommending taking down the Vietnam Memorial. That’s because it’s not a celebration of the war, but rather a solemn reminder of its human toll.

Most of these monuments rightfully should come down. But I say let’s leave a few to remind us of our country’s racist past, and of the progress we’ve made and still have yet to make.

History cannot be changed by removing evidence of it. But it can be retold. Let’s surround those old statues with the truth.