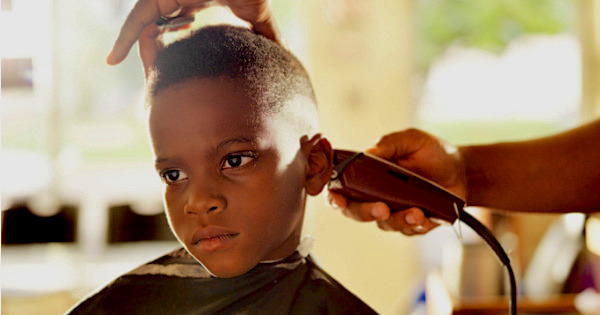 Barbershops are the most non-unique of locations: male-dominated spaces where, more often than not, the sport of the season is on a screen and discussion routinely centers on things female. It’s visited on you before you have memory.

Countless men have been christened inside of them, heralded as the progeny of their fathers whose arms they were being cradled in and encouraged to engage in the giving of high-fives and acceptance of the new identity “little man.”

Rarely spaces of violence, they’re known to be bombastic and braggadocios with a particular maleness that is often single-mindedly focused on the scent of a woman.

A play I wrote a number of years back dealt with the experience of being a gay Black guy and navigating the world of barbershops: a perceived-to-be safe space where dis-ease would creep in silently and safety dissipates into vulnerability. There’s an unspoken comfort that breathes in the air when straight men believe they’re alone and safe enough to express what’s on their mind.

Barbershops are a penis-positive environment; one of very few intimate spaces heterosexual men will knowingly allow themselves to step into. Within that space are invisible fences of understanding, including an unspoken pact that while fag jokes may no longer be en vogue, it doesn’t mean they’re no longer told. The language has simply evolved with the times. Everyone lets their guard down, because it’s a straight space. Though my experiences were at Black-owned establishments, the sentiment runs through every culture of straight guy there is.

At the same time, barbershops are a place where male bodies are in constant contact. Be it a haircut or shave, there are moments when your barber is either lips apart from your face or, by virtue of his height to the lift of the chair, your face is a whisper away from his crotch.

Often, it’s in these specific moments when conversations of the female body come into play like a shield. By default, many gay men have found themselves sitting in a barber’s chair realizing they are outsiders. Girls are welcome. “Hey girls” are not.

Barbershops have been a part of my world for decades, which is why I so vividly recall the day I decided not to return.

In that exit I realized there were things I’d have to lose, including rooms of men who appreciate musical heritage and know exactly what part of the song to come in on. These spaces were also training grounds for philosophical lessons on race and strengthening Black male pride, as well as showcases for the versatility of our hair experience: high-top fades, finger waves, Caesar cuts, corn-rows, locs, afros.

I’ve journeyed through all of them whenever new energy was calling; and with my afro came a desire to both engage that feeling as well comprehension that, in time, I could maintain it myself—removing the indignity of sitting vulnerably and regretfully silent.

Prior to that I had locs. A very intimate experience. Most men never have that level of physical touch with their stylist. But when he’s running his fingers through your hair, twisting it between his fingers, assertively applying fragrant oils to your scalp, it’s hard not to feel connected.

And here were these men, through the years, my head in their hands, tilted back, shampooing my hair under the warm running water as they’d casually begin telling me the latest fag joke they’d heard.

Without any venom, just mockery. No matter which shop I went to. I always left vowing to never return. I’d have to compartmentalize too much to allow these men to continue touching me.

Times have undoubtedly changed, and I see straight men, and those perceived to be, struggling to become mindful of their actions. Some are fully invested, aware that decades of toxicity have not only affected them but bled into the actions of their sons and experiences of their daughters.

Others see it directly in front of their eyes and painfully turn away, realizing they’ve been benefiting from systems of oppression; publicly railing against privilege while privately bathing in it. In all things social, the dominance of the straight guy continues to be the largest shadow in the room.

When I cut my locs I walked way knowing that at some point I’d be back. It felt less like an ending and more a temporary parting of ways. I had a connection to these spaces whether I wanted to or not. They were an integral part of my upbringing, where telling gay jokes seemed the best mode of passing the time.

As a child there was no escape. You were a hostage until your alleged scheduled appointment time arrived.

Back then I didn’t feel the right to have a say over who touched me. I understood it from the idea of molestation and inappropriate adults, but this was different. How do you ask your barber to not touch you?

As a teenager, at a time when there were no queer spaces, and the word queer wasn’t today’s queer, finding another gay boy was not easy. Not impossible, but by no means readily available.

At a time when my hormones were on fire, the most consistent male touch came from barbers; whose words routinely denigrated my spirit while their hands held my face. It’s a discordant energy.

Last year I felt my hair calling for something new. I hadn’t been inside a shop in 8 years but picked one where I knew some good friends worked. I was introduced to a new barber, who seemed like a kind guy, and we hit it off well. We shared a music appreciation and recounted favorite songs, artists and imaginary playlists.

On my fourth visit he was just back from vacation, sun-kissed from the beach, excitedly recounting the trip and telling everyone about the funniest part of his time away when he saw this group of faggots on the beach.

I inhaled and closed my eyes. I was silent for a moment. I wanted to make a scene but felt so unseen. Then I heard myself ask him to stop cutting. I’d never done that before. Even if I’d have wanted to, the words wouldn’t have come out. But I said stop. He was in mid-laugh and insisted he wasn’t finished—but I was done. Anything had to be better than sitting through this.

I opened my eyes to see another barber laughing across the aisle, as were the guys in the chairs on either side of me, while the rest of the customers seemed caught up in music and conversation.

A little kid was reading a comic book in a chair by the door. We made eye contact. Then he buried himself back into the book. That had once been my solace too.

When I paid and left, the barber was confused but cordial; reminding me to schedule my next appointment. His lack of awareness pushed back against my desire to scream. Why make myself angrier? In his eyes he’d done nothing wrong. In this space he was in bounds.

I walked out, staring at the never-ending Greek chorus of bravado sitting in chairs waiting for their turn. Laughing uproariously, they were the actual problem. The good guys who stay silent.

They didn’t start the fire, but they continue to stoke it—and no matter the cultural make-up of the shop they all have little boys sitting in chairs witnessing everything.

There’s a new barber in my life now, and things seem to be working out. I think it could last. It’s a big space with lots of people and activity. It feels as if every kind of everyone is there, and the men are thoughtful about their words and the audience around them. It’s refreshing. 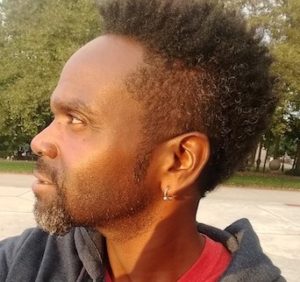 I miss the intimacy of the places I traditionally went to but appreciate the comfort of this new atmosphere. He finished recently and did the walk around with the mirror, letting me see every angle. He saw a spot he wanted to fix and ran his hand along my face, tilting my head and taking a scissor to my hair. I caught my reflection in the mirror as he adjusted my gaze and admired his work.

Sometimes the simplest touch makes all the difference in the world—and you never know how much you needed it until it’s there.

Facebook35TweetPin1EmailShares36
wpDiscuz
Share this ArticleLike this article? Email it to a friend!
Email sent!