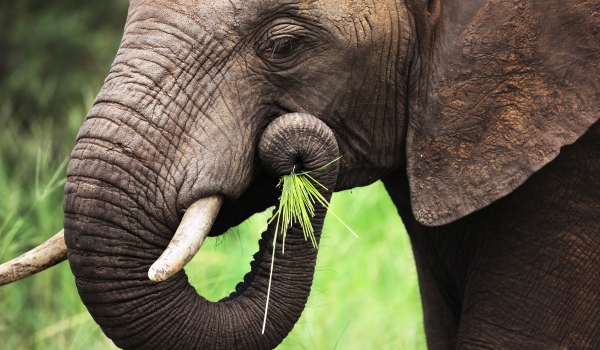 —
LONDON, 30 July, 2019 – Like humans, all social animals exploit, disturb and alter their natural environment. Biologists have just identified at least one species, elephants, that – in the course of bulldozing their way through the undergrowth and destroying young trees – actually make the forest more efficient at storing carbon and thus containing global heating.

The African forest elephant Loxodonta cyclotis browses upon and uproots young trees with stems smaller than 30cms and deposits the digested foliage as fertiliser, rich in seeds for the next generation of saplings.

Researchers from Italy, France, Brazil and the US report in the journal Nature Geoscience that this simple act – performed by perhaps one elephant in one square kilometre of forest – actually adds to the biomass locked in the remaining timber at the rate of by between 26 and 60 tonnes per hectare.

And if these ancient mega-herbivores were not crashing through the forest, consuming young trees, the forest would be home to 7% less biomass in the form of dense timber.

Forest elephants, the same scientists say, are rapidly declining in numbers. The researchers had been studying the species for years, and devised a mathematical model of their impact on the environment that supported them.

“Humanity is doing its best to rid the planet of elephants as quickly as it can. Forest elephants are facing extinction. All of their positive effect on carbon and their roles as forest gardeners and engineers will be lost”

Humans convert forest to farmland and increase the levels of carbon dioxide and other greenhouse gases that fuel global heating and the climate emergency. Forest elephants, on the other hand, simply alter the composition of the forest and make their environment a little cooler.

They do so by clearing away the fast-growing species to make more space for trees slower to climb towards the sunlight but with timber of higher density.

“Lo and behold, as we look at numbers of elephants in a forest and we look at the composition of forest over time, we find that the proportion of trees with high-density wood is higher in forests with elephants,” said Stephen Blake of St Louis University in the US, one of the authors.

“The simulation found that the slow-growing plant species survive better when elephants are present. These species aren’t eaten by elephants and, over time, the forest becomes dominated by these slow-growing species. Wood (lignin) has a carbon backbone, meaning it has a large number of carbon molecules in it.

The finding is consistent with the Gaia theory of earth system science: that life unconsciously but collectively tends to work in ways that keep the planet’s atmosphere stable and the planetary temperatures within comfortable boundaries.

So far humans are the most conspicuous exception to this rule. Biologists have wondered about the contribution of the mega-herbivores: in this one case, it seems that forest elephants are good for the forest and good for climate control.

The finding is also consistent with an argument put by conservationists, biologists and climate scientists: the healthiest and most efficient forests at absorbing atmospheric carbon are those that are home to the richest levels of biodiversity – that is, forests that remain natural wilderness.

Biologists and conservationists talk a lot about “ecosystem services” and “natural capital”: that is, the contribution of the natural world, directly or indirectly, to human wealth. The researchers put a cash value on the carbon contribution of the African forest elephants: they perform a carbon storage service of $43 bn.

“The sad reality is that humanity is doing its best to rid the planet of elephants as quickly as it can,” said Dr Blake. “Forest elephants are rapidly declining and facing extinction. From a climate perspective, all of their positive effect on carbon and their myriad other ecological roles as forest gardeners and engineers will be lost.” – Climate News Network