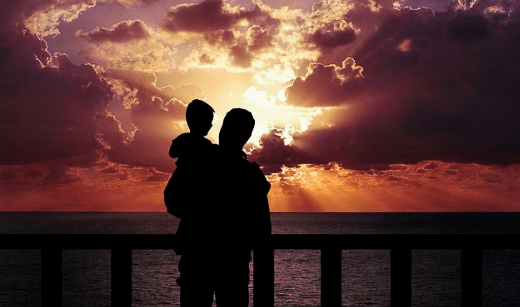 As I look back on my years as a father today, and at the man who raised me, who’s been gone 22 years now, I hurt.

I miss my father. We had our disputes and disagreements and arguments and even a fight or two, of course. I loved him though, and I know he loved me. I didn’t always see it at the time. But with the clarity provided by loss and age, I can see it now. It still hurts that he’s gone. I hope he was proud of me, and that he knew how much I loved him.

I hurt too as I see my own failings as a father. I’ve screwed up – badly, and more than once. I’ve failed my kids before, and I’m probably not done with that, either. I keep trying though. To improve. To be a better father. I hope they know I’m proud of them, and how much I love them.

I’ve got a son who’s married now. Another son is off in the Army, and my daughter is moving out this month. I sent three of my kids on a week-long 1,800 mile trip and worried about them during the entire 12.5-hour drive.

Did I teach them everything they need to know? I worry about that daily.

Can you ever really do that?

If you don’t, have you failed? Or have you just shown the world your humanity?

I hurt for my friend who is marking within one week, her father’s birthday, his death, and her second Father’s Day without him. I can’t imagine what this weekend is like for her and her family.

I hurt too for the people who want to be with their fathers, but can’t be, because of work, or military service, or death. There are fathers who won’t hear from their children for the same reasons. I hope they have good memories of the time they were able to have.

But I think the people I hurt most for are those who don’t know a father’s love. Maybe dad was never there. Or maybe he was only physically there, but never emotionally. Or maybe one of the two people in the world who are supposed to never hurt you, hurt them in ways too horrid to think about, let alone speak of.

That they can’t know the safety and warmth and affection from that one person in their life twists a knife in my heart.

There are people who mark today by celebrating the death of the man who was supposed to love them unconditionally. Others are thrilled that that man, though alive, is no longer in their lives.

Some of them are terrified that he’ll try to be part of their lives again.

There are men today who won’t hear the phone ring, or see a familiar car drive up the driveway. Who would give their dying breath to have their child speak to them today in something other than hatred or loathing.

As you observe your Father’s Day this year, please keep a prayer or warm thought in your heart for those who can’t celebrate it, for whom this day is an excruciating reminder of what they’ve suffered.

If you are one of these people, here are some resources for you.

Facebook7Tweet3PinEmailShares10
wpDiscuz
Share this ArticleLike this article? Email it to a friend!
Email sent!