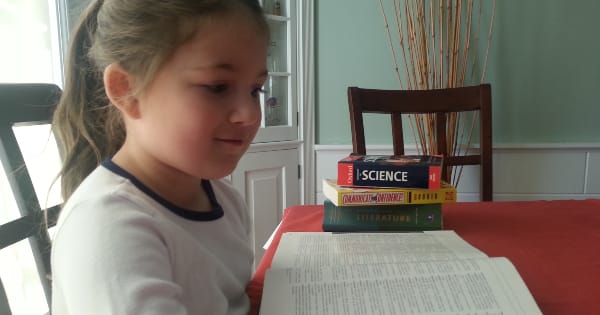 We’ve been spending a little less time playing on the floor lately. Less time with trucks and trains and action figures. Now that Alaina is officially signed up for kindergarten this fall, I decided that it’s time for us to buckle down and start devoting a larger percentage of our time to more serious efforts. More academic pursuits.

I was fairly optimistic about our prospects. My wife might add an asterisk and clarify them as “book smarts”, but I consider myself a pretty intelligent guy. My daughter seems pretty advanced for her age, though I’ll admit to some bias. She certainly has shown an aptitude for sarcasm beyond her years and her endless questions seem to demonstrate a desire to further her knowledge.

It is these questions that have been causing us difficulty. It turns out that even helping a four year old with homework is enough to expose some pretty big holes in my knowledge. Holes that I had hoped to hide from her at least until we had to start dealing with this “common core” math that I’ve heard about.

I can’t explain why eleven isn’t tenty-one, twelve tenty-two. Once we get into the twenties she can continue for as long as her concentration holds, but the teens are problematic. Her stubbornness over the matter is tiresome, but it really is hard to argue with her. There is no rational reason for eleven not being tenty-one.

It’s also hard to explain why we need two versions of each letter. Surely punctuation and context would be enough to identify the significance of a word without having to resort to capitalizing it. We’ve doubled our alphabet and made letters harder to learn for no explainable reason. No offense to any Katies, Karens or Keiths that may be reading, but there really isn’t much sense in the letter K either. It seems to me that the letter C should be sufficient to cover that sound adequately.

We’re starting to make some progress. Part of me wishes that we had started some of this earlier, that she would try a little harder. The other part remembers that she is still only four and already exceeding expectations for her age. That nothing good will come by being pushy or trying to rush her progress.

I also wonder who I need to talk to about making some of these changes to the English language and mathematics system.

—
A version of this post was previously published on ThirstyDaddy and is republished here with permission from the author.
—