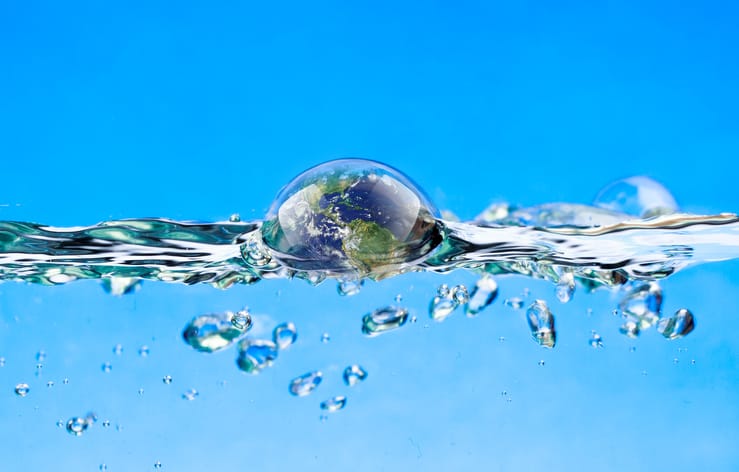 This post is part of a blog series written by Priyadarshan Pandey.

Your friend H2O is back with another post. Let’s get straight into it!

I’m sure by now the picture I’ve painted must have you convinced that I’m as integral to your world as a fake blood supplier to a Tarantino movie. It might even seem to you that you couldn’t miss my presence around you even with all three of your eyes closed. And you’d be right on both accounts. But don’t let this lull you into a false sense of security. While the earth system maybe characterised by its abundance of liquid water, its freshwater (water containing less than 0.05% of total dissolved solutes) reserves are deceptively small.

And all the boards did shrink;

Nor any drop to drink.

–Samuel T Colleridge, The Rime of the Ancient Mariner

The overwhelming majority of the earth’s water is in the oceans, which cover (as you already know from your very first geography lesson) two thirds of the earth’s surface. But that water contains high quantity of salts and other inorganic substances (I did tell you I’m called “the Universal Solvent”, didn’t I?), making it unfit for use in variety of human endeavours.

As the graph above shows, the glaciers and polar caps hold a great proportion of the earth’s freshwater, which while feeding majority of the perennial rivers are rendered unutilised due to their remoteness. The easily tapped surface sources (rivers, lakes, etc.), which historically provided the major part of the water consumed by humans, constitute a tiny fraction of all freshwater available on earth.

The one source which is relatively abundant, present almost everywhere on the face of the earth, and is extractable using technologies humans have used for centuries, is groundwater. Groundwater is often cheaper, more convenient and less vulnerable to pollution than surface water. Therefore, it is commonly used for public water supplies in the contemporary world.

A HISTORY OF GROUNDWATER USAGE

Humans have been utilising groundwater for millennia; through springs, through dug wells, or pre-industrial technologies like the Persian wheel. Even though the understanding of the physical world around was somewhat lacking in ancient times, the science of groundwater exploration, extraction and monitoring of its quantity and quality were very much in place. An example of this dichotomy can be drawn from what the philosophers considered the source of groundwater to be at the time when ingenious groundwater extraction systems like qanats were being utilised for irrigation.

Prior to the later part of the seventeenth century it was generally assumed that the water discharged by the springs could not be derived from the rain, firstly because the rainfall was believed to be inadequate in quantity (the fact that a moderately heavy shower of 10mm can drop about 100 kilo litres of water on a hectare of land in just one hour was vehemently overlooked), and secondly because the earth was believed to be too impervious to permit penetration of the rain water far below the surface. The famous Stoic philosopher, Lucius Annaeus Seneca declared that

Rainfall cannot possibly be the source of springs because it penetrates only a few feet into the earth whereas springs are fed from deep down. As a diligent digger among my vines I can affirm my observation that no rain is ever so heavy as to reach the ground to a depth of more than ten feet.

This ‘scientific’ hypothesis was generally accepted as fact for 1500 years and many a famous philosophers devoted their thought to devise ingenious hypotheses to account in some other way for spring and stream water. Thales, an Ionian philosopher of the School of Miletus, stated that the springs and streams are derived from the ocean, and that the sea water is driven into the rocks by the winds and it then elevated in the mountains as springs by the pressure of rocks. Plato (427-347, B.C.) the great Athenian philosopher, stated that the water forming the seas, lakes, rivers, and springs came from a large underground cavern called “Tartarus’ and all these waters return to this cavern through various subsurface passages.

You, however, through the extraordinary good fortune of being born in the right century, know the groundwater to be a part of the meteorological water cycle. Groundwater is all the water that has penetrated the earth’s surface and is found in one of two soil layers. The one nearest the surface is the “zone of aeration”, where gaps between soil particles (called pores) are filled with both air and water. Below this layer is the “zone of saturation”, where the gaps are completely filled with water. The water table is the boundary between these two layers. As the amount of groundwater water increases or decreases, the water table rises or falls accordingly.

The measure of these voids (pores) in a material is known as its porosity. The higher the porosity, the greater is the amount of water that the material can hold. The speed at which water can flow through these pores is called the permeability of the material. It is an extremely important characteristic of any material as it describes how much water the particular surface can absorb.

Side note, reduction in permeability of the surface can be devastating for an area because as a surface becomes less permeable, an increasing amount of water remains on the surface, creating a greater potential for flooding. In fact, most of the urban floods that humans face these days occur due to lack of exposed permeable surface to the rainwater.

Water that infiltrates the soil flows downward until it encounters impermeable rock (shown in gray), and then travels laterally. The locations where water moves laterally are called “aquifers”. The flow of groundwater is much slower than runoff, with speeds usually measured in centimeters per day, meters per year, or even centimeters per year.

Aquifers are the porous layers of rocks underneath the surface of the earth which are saturated with water thus forming the basis of groundwater. They are broadly categorised into two categories- unconfined and confined.

Confined aquifers have considerably higher hydraulic pressure than unconfined aquifers. This can create artesian wells that flow freely without the need of a pump and rise to a higher elevation than the static water table at the above, unconfined, aquifer. We will talk about more about artesian wells in the next part of the series where we will be diving into the utilisation of aquifers.

I’ll see you soon with the penultimate blog of what has been a great monologue for me. If you miss me, just go out and enjoy this wonderful monsoon.