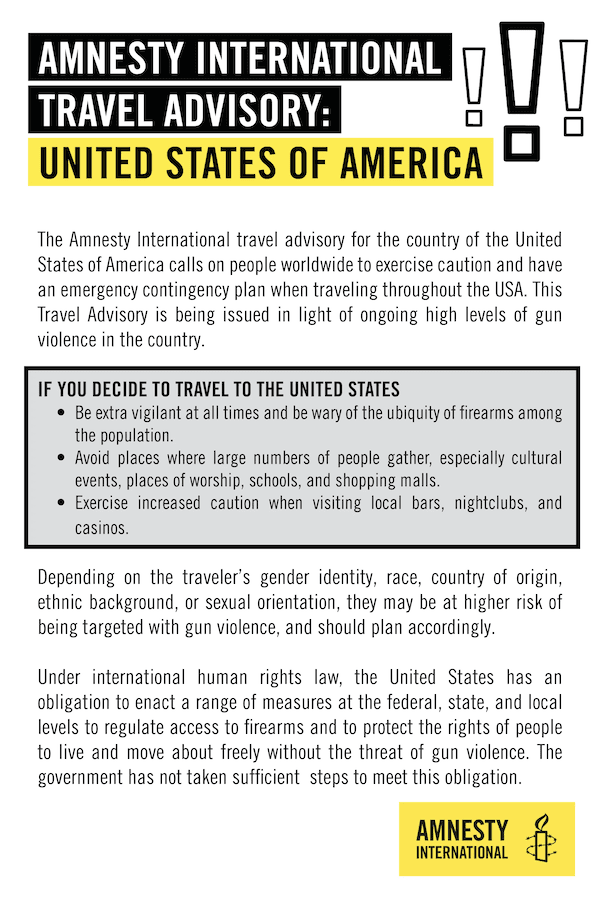 Since a total of 31 people were ruthlessly murdered in gun violence in two separate incidents within hours of each other in El Paso, Texas and Dayton, Ohio, the civil rights organization, Amnesty International, has issued a travel warning to visitors considering journeying to the U.S. among “high levels of gun violence,” which the group referred to as a human rights crisis.

With growing incidents of domestic-grown terrorism perpetrated by avowed white nationalists in the country,

“Depending on the traveler’s gender identity, race, country of origin, ethnic background, or sexual orientation, they may be at higher risk of being targeted with gun violence, and should plan accordingly,” the advisory added.

Several countries have issued their own warnings to travelers coming to the U.S. including Uruguay, Venezuela, Japan, France, Germany, Netherlands, Ireland, Canada and New Zealand.

In a statement issued by Japan’s Minister of Foreign Affairs, the diplomatic mission warned Japanese citizens to “be aware of the potential for gunfire incidents everywhere in the United States,” and referred to the country as a “gun society.”

The foreign ministry of Uruguay warned its residents to apply caution “against growing indiscriminate violence, mostly for hate crimes” fueled by racism and discrimination, “which cost more than 250 people their lives in the first seven months of this year.

The advisory also warned Uruguayan residents traveling to the country “to avoid areas with large concentrations of people like theme parks, shopping centers, art festivals, religious events, food festivals and any kind of cultural or sporting gathering,” noting the “indiscriminate possession of firearms by the population.”

The German government’s travel warning to the U.S. refers to the “easy” access and possession of firearms and warns of the relatively common shootings throughout the country.

The French diplomatic service alerted French visitors that “carrying firearms is authorized and common” in several U.S. states. “Visitors must therefore, in all circumstances, keep their calm and sang-froid (cold blood).”

“Travelers to the United States should remain cautious that the country does not adequately protect people’s right to be safe, regardless of who they might be,” stated Ernest Coverson, campaign manager for the End Gun Violence Campaign at Amnesty International USA.

“People in the United States cannot reasonably expect to be free from harm – a guarantee of not being shot is impossible. Once again, it is chillingly clear that the U.S. government is unwilling to ensure protection against gun violence.”

The continuing and ever-increasing scourge of gun violence has placed the United States under an international spotlight. Its president, Donald Trump, spoke with typical bravado and threatened other countries issuing travel advisories.

“If they did that, we’d just reciprocate,” Trump said at an impromptu interview with reporters. “We are a very reciprocal nation with me as the head,” he continued. “When somebody does something negative to us in terms of a country, we do it to them.”

This President seems not to care how the United States is regarded around the world with his highly touted “America First” policy, which has resulted in “America Alone” on many policy issues.

Our standing and leadership position in the world, however, depends on how closely we are perceived to uphold our expressed values of protecting human dignity and human rights, of serving as a safe and supportive place for people to live and visit, and to uphold the doctrine that all people are created equal.

Following each tragic episode of gun violence, we hear politicians mouth words of possible solutions, but after the news turns to other issues, the sounds of silence engulf the airwaves where proposals once reverberated.

How much longer will legislators, primarily on the Republican side of the aisle, hibernate within the pockets of the gun lobbies and manufacturers before they care more about saving lives and restoring the diminished image of the U.S. before they come “right” to the side of history rather than to politics?

The late Dr. Derrick Bell of New York University Law School forwarded the theory of “interest convergence,” meaning that white people will support racial justice only when they understand and see that there is something in it for them, when there is a “convergence” between the interests of white people and racial justice.

Bell asserted that the Supreme Court ended the longstanding policy in 1954 of “separate but equal” in Brown v. Board of Education because it presented to the world, and in particular, to the Soviet Union during the height of the cold war, a United States that supported civil and human rights as the USSR exposed the extreme racial tensions in its propaganda campaigns.

Let’s take another example: The Church of Latter-Day Saints (LDS) president, Brigham Young, instituted a policy on February 13, 1849, emanating from “divine revelation” and continuing until as recently as 1978 forbidding ordination of black men of African descent from the ranks of LDS priesthood.

This policy prohibited black men and women from participating in the temple Endowment and sealings, which the Church requires for the highest degree of salvation. The policy likewise restricted black people from attending or participating in temple marriages.

Young attributed this restriction to the sin of Cain, Adam and Eve’s eldest son, who killed his brother Abel: “What chance is there for the redemption of the Negro?” stated Young in 1849 following declaration of his restrictive policy. “The Lord had cursed Cain’s seed with blackness and prohibited them the Priesthood.”

The twelfth LDS Church president, Spencer W. Kimball, who served from 1973 to his death in 1985, was supposedly touched with a vision, and he reversed the ban, referring to it as “the long-promised day.”

Well, we can ask today whether “revelation” or interest conversion was the determining factor in granting black people full membership rights in the Church at a time of ongoing and heightened civil rights activities in the United States and an increase in LDS missionary recruitment efforts throughout the African continent.

Possibly when the Republican Party realizes its interests to follow the expressed wishes of the majority of the electorate, maybe then the GOP will join with the Democrats to craft and pass comprehensive and compassionate gun safety reform and immigration reform, and stop the politics of division toward people of color, LGBTQ people, Muslims, and all people who do not identify as Christian.

Maybe then and only then will the Republican Party abandon policies that embolden white nationalists and save the Party from itself.

Facebook133Tweet13Pin1EmailShares147
wpDiscuz
0
0
Would love your thoughts, please comment.x
()
x
| Reply
Share this ArticleLike this article? Email it to a friend!
Email sent!