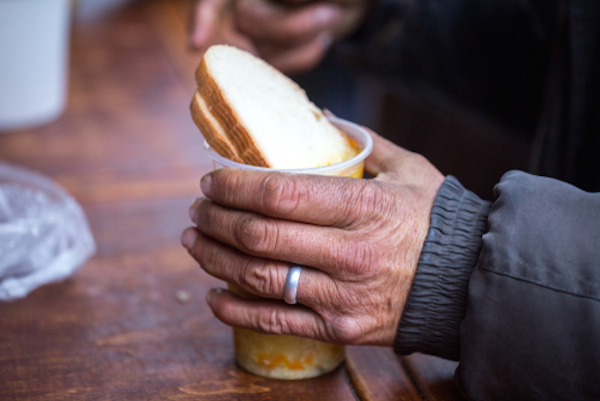 I live in a city. Ninety-five to ninety-eight percent of us in this city have places to sleep tonight. But several thousand don’t. Now there are many reasons that people live on the street, and since I have absolutely no bona fides in the field, I am not going to try and figure out the WHY of it all–for me, which is probably why I ignored the problem for so long.

But last week I came home from work and some guy is sleeping in the thin median of grass between the sidewalk in front of my house and the street. He is filthy, curled up on his side, and next to him are several plastic bags filled to the brim with…stuff.

My wife says, “honey, you have to do something!” I sighed because that’s not the first time she’s uttered that phrase, and usually whatever I do about whatever it is that she wants me to do something about isn’t done in the way she wants it done, and I get an earful…

So I go out and stare at the guy. What do you do? I decide that I’m not going to rile him so I call the police. The police said that they would send someone by, and a half-hour later a blue Kia pulls up and a young woman gets out, and without any fear or trepidations, goes over the man, kneels down, wakes him and talks to him.

They go back and forth for a while. It turns out that there is another person in the Kia, a slightly older woman. The two of them help the man gather up his stuff, help him to his feet, and guide him to the car. The young woman comes over to me and gives me a card. Her name is Helen and she’s a volunteer with a shelter. It’s called the St. Anne’s Shelter. She explained that the homeless man had given her permission to take him to
the shelter. There he could spend the night, or at least rest for a while.

They left. I sat down with a beer and thought about it.

A couple of days later I went down to St. Anne’s Shelter. It is a nondescript building in a nondescript part of town. I walked inside. I didn’t know what to do. The receptionist stared at me but didn’t say anything. Above a couch was a corkboard, on it were some flyers. I went over and looked at them. One said BE A VOLUNTEER! They needed volunteers to help hand out box lunches on Sunday morning.

I asked the receptionist if I could sign up to volunteer. She handed me a clipboard and I filled out this questionnaire, then I went home. Someone from the shelter called me later and we talked about volunteering, and the next thing I knew, I was standing in the cold in front of
the St. Ann Shelter waiting to be put to work.

There were dozens of volunteers hustling around; some were bone-tired because they were up all early making box lunches–others were peppy and bright. They made coffee, and within minutes homeless men, women, and children started to gather.

I had expected to see a lot of older men in tattered clothes, and there were a number who fit that description, but I wasn’t expecting the women and children; there were 20-somethings in jeans and tee-shirts; some held their heads high while others didn’t look at anyone; some were crisp and friendly, others mumbled or didn’t speak at all. In short, the mix of people shredded my stereotype of what the homeless looked like…

The rest of the day was a blur. I helped make coffee, hand out the lunches, clean up the area…I saw a lot of grateful men and women who were beaten down by an unforgiving world but not without their pride, and accept a box of food in the same vein as it was given, with honor and kindness.

The parish pastor stood by the entrance door and greeted each person with a handshake and a hand on the shoulder. When you are on the street you are invisible; many of them simply weren’t accustomed to people looking them in the eye, let alone extend a hand, a kind word…

I left in the late afternoon. As I drove home I tried to categorize the experience–fit it into my body of work, but I was very conflicted…should I feel good about myself? After all, I was going home to eat from my refrigerator and sleep in my bed while those poor souls were back on the street, at 10 pm, without a cent in their pocket, and nowhere to go…

Would I do it again? Yes. Because it is better to do something than nothing.

Volunteer! Work for a day in a soup kitchen. Help out at an AIDS shelter. Man a suicide line, help out at an animal shelter, clean up a local park,
tutor some homeless kids, work the info desk at a hospital. Anything.