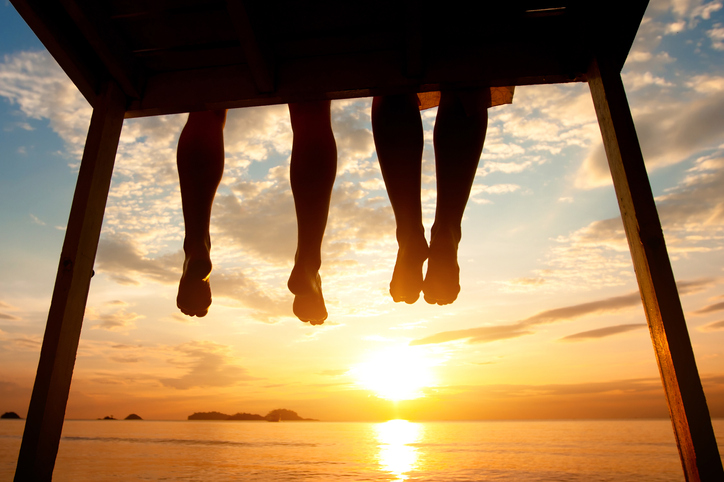 As Valentine’s Day approaches, I find myself thinking about love, relationships, and how incredibly awkward I’ve always been with women.

Through some miracle, which as far as I can tell, was not the handiwork of a bow-wielding little angel in a diaper, I have managed to find love again after a long, furious battle with The Single Life for control of my future.

My girlfriend, who I will not embarrass by mentioning by name, is intelligent, sweet, incredibly kind, patient, generous, romantic, funny, and beautiful.

In other words, she is unbelievably out of my league.

Love, dating, relationships, talking to women… all topics that have befuddled me from the moment my voice first cracked and I realized that girls were complicated creatures that I would never truly understand, but would forever hold a power over me.

Now, after over four decades on this planet, I’ve come to the realization that my repeated failures with the opposite sex aren’t completely my fault.

The truth is, no one ever sat me down and talked to me about the birds and the bees.

In order for you to understand how something like this could happen, I’ll have to tell you a little about my childhood.

That should tip you off that my childhood didn’t go exactly the way it was drawn up on the chalkboard in the locker room.

My Dad remarried and my Stepmother was a hardcore, devout Catholic.  I went to Catholic school, I was an altar boy, and I even did the readings at Sunday Mass.

In other words, Catholic Guilt played a major role in my upbringing.  I was a curious child, who asked a lot of questions, and was always told: “Go look it up!”

Since this was before the internet boom, my resource materials were limited to the dictionary, a set of the Encyclopedia Britannica with one of the volumes inexplicably missing, and The Bible.

Those items weren’t much help when it came to trying to figure out things like how to talk to girls, dating, and sex.  In fact, The Bible made it quite clear that sex was a sin if you weren’t married, and that the act should only be used for procreation.

It wasn’t like I could ask one of my teachers. Which nun would’ve beaten me the least had I asked her to explain the birds and the bees? To this day, I still get the occasional scarring mental image of a very disapproving nun angrily waving a large ruler at me, anytime I’m about to get intimate.

So why didn’t I just talk to my Dad about all this?  While he was the easiest going man I’ve ever known, he just seemed overwhelmed with having to raise my little sister and me at his age.  He was always working, and never had time to throw the ball around or help me with my batting stance, so how was I supposed to approach him about a delicate subject like sex?

To be perfectly honest, I was scared to death he would tell my Stepmother, and she would freak out and send me off to a monastery or military school after her desperate calls to the Pope went unreturned. The woman never allowed me to socialize after school, so I was certain she wouldn’t be cool with the idea of my awkwardly chatting up some harlot looking to eventually steal my virginity.

I did have an older stepbrother, who I looked up to a great deal.  He was popular, always had an attractive girlfriend, and was confident and outgoing in a way that was the polar opposite of how insecure and introverted I was.

I couldn’t ask him for dating advice because I knew he would tease me relentlessly.  To give you an idea of how he used to torment me, I’m going to tell you about his favorite prank.

When I’d enter a room, he’d pretend that he’d just hung up the phone, and tell me that Tootie from The Facts of Life had called to cancel our date because something had happened to her roller skates.

He did it to me all the time.  I don’t know why he chose Tootie to be my imaginary girlfriend, or why it always had to be an equipment issue that kept her from keeping our dates.

What I did know, though, was that if I ever confided in him that I had a massive crush on one of my classmates, he’d never let me live it down.  I worried that he’d find out the name of my crush and embarrass me by telling her about it in front of my entire class.

Looking back at it now, that might not have been the worst thing.  At least she would’ve known I’d liked her, and maybe that would’ve broken the ice and led to our going on a date.

Of course, I’d have to end it with Tootie first.

Being shy, scrawny, and the smartest kid in the class did not work in my favor, either.  My classmates thought I was Super Nerd, knower of all, so how could I ask for help and admit that I knew absolutely nothing about sex or how to speak to a female?

Things got even more complicated when I went to an all-boy Catholic High School.  Now there weren’t even any girls around for me to attempt to have an awkward conversation with under the guise of asking to borrow a pen.

I was doomed without a proper talk on the birds and the bees.

Clearly, I was destined for the Monk Academy after high school.

My first date was a disaster. I couldn’t ask out the girl I had a crush on because that would require my being able to speak to her, so I targeted an old grammar school classmate who I knew liked me.

Because of the Catholic Guilt, which had become so powerful that it now had influence over non-sinful activities such as asking out a girl, and because no one had ever explained how dealing with the opposite sex worked, arranging for this date required the clandestine skills of a CIA operative.

I made my calls from the phone in the basement, in the dark, when I was sure that no one was in any of the rooms on the main level of the house.

Making my first date should have been a rite of passage for which I was praised, maybe even taken out for a celebratory ice cream by my Dad, where he would then slip me some money to make sure my date and I had a good time, but instead, I felt ashamed.  I thought I had to do it all in secret, and I couldn’t let anyone else know about it until it was too late to turn back.

Is it any surprise that the date went horribly, ended early, and we never spoke again?

How was it supposed to go well when I had absolutely no idea what to expect, how to act, or how to react when things didn’t go as I imagined they should?

Since that colossal first disaster, I’ve basically been winging it when I go on a date. I know where it’s going to take place, I have some talking points to keep the conversation flowing, and then I just make it up as I go along.

You know you’re horrible at relationships when your dating style is the same as your writing style.

While that might work well with the written word, dates often won’t allow you to take a stab at a rewrite if they are incredibly disappointed with the first draft.

The closest I’ve ever come to a talk about the birds and bees took place on my first day at NYU. My stepsister helped me move into my dorm room, and as she left, she called over her shoulder, “Don’t forget to use a condom,” much to the amusement of my RA.

While it wasn’t much, I was happy to accept any guidance since I was going to be spending the next four years living in a co-ed residence hall.

Somehow, despite never going through my Jedi relationship training, I’ve managed to get married, find love after divorce, and even learn how to speak to women.

I don’t think I’m the only one who never got “The Talk”—so I hope my story can be an inspiration to the rest of my kind.

We can still lead normal lives.  Just find a woman who knows what she wants, do whatever it takes to keep her happy, and if you have kids, make sure she talks to them about the birds and the bees.

This story has been republished to Medium.

Austin is a screenwriter, a writer for a late night TV show, and a diehard Yankees fan living in the middle of Red Sox Nation. You can check out more of his Deep Thoughts on his blog, The Return of the Modern Philosopher.

This is so good, Austin! I love that you come across as a human being. I always thought men were supposed to be treated like human beings. That is until I heard a sermon by a man my age talked about how you know women have ulterior motives when they are nice or try to have a conversation with you. That they may seem to be having a casual conversation, but they really want to “get to know you better”. Sure enough, the next time I was at the home improvement store, I made one too many trips around the… Read more »

FacebookTweetPinEmailShares119
wpDiscuz
1
0
Would love your thoughts, please comment.x
()
x
| Reply
Share this ArticleLike this article? Email it to a friend!
Email sent!