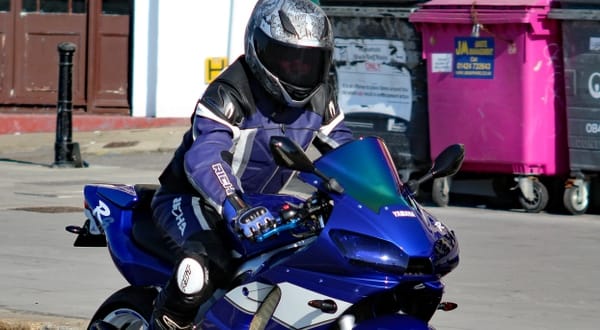 —
I had all sorts of excuses for not riding. The tires were low. The bike needed to be serviced. The weather was too cold, or too hot, or it was raining.

Then we visited a friend’s house for his son’s high school graduation party. He’d just bought a Yamaha V-Star the day before. He knew I was thinking about downsizing, and invited me to try out his bike, a 950 cc machine—about half the size of the Goldwing, both in displacement and weight.

I enjoyed myself for those ten minutes.

I didn’t get over 40 miles an hour, and I wasn’t doing a bunch of twisties. But it reminded me of how much fun it was to ride.

That seemed to break things loose for me. Then he said he was thinking about going for a ride later that afternoon, and did I want to come?

First ride in a long time.

It wasn’t a long ride. We covered about 90 miles in an hour-and-a-half, and that included an ice-cream stop.

But riding was fun again.

Or maybe it had always been fun, and I’d just forgotten about how much fun it was.

A couple of days later, I switched out the windshields on the ‘Wing. The previous owner had both a tall and short windshield, and I’d brought it home with the tall one on, intending to switch them out for the summer. I finally did that a week after our long ride, and went on another “just because” ride that night.

I had a blast.

Suddenly I was looking for reasons to ride. It was starting to be fun again.

But something was missing. I wanted to customize my bike, but my finances are limited these days.

Then I discovered Plasti Dip.

What the Heck is Plasti Dip?

Developed in the early 70s as a rubberized coating for tool handles, Plasti Dip soon collected a rabid group of fans called Dipheads™. People really will dip anything, from cups to baseball bats to cars and motorcycles.

Plasti Dip ends up being easier to use than paint because of the way it’s formulated and the way it adheres to surfaces. You don’t have to do the surface prep with Plasti Dip like you do with paint. Instead of sanding the surface down with multiple grades of sandpaper, you just need a clean, dry surface.

And the best part? When you want to change colors, you just peel the old stuff off. Seriously.

I started with the windshield garnish and front grille for two reasons. The garnish is the biggest piece of chrome on the bike, and both the garnish and grille are very easy to remove. Plus, the black garnish would flow nicely into the black windshield.

How I Did It

I won’t go into detail about removing the garnish. There are plenty of guides and videos out there. Just be careful when you remove the clips on the mirror trim; they’re easy to break on an older bike.

I decided to not remove the vent grills from the garnish. They were already black, there was no easy way to remove them or mask them, and the holes were big enough that I didn’t think the spray would fill them in.

I removed the garnish the night before, scraped all the bug guts off with my fingernail and a soft cloth, then cleaned it with Windex and let it dry. You want your piece to be as clean and bone-dry as possible from what I’ve read. Once I had it clean, I only handled it from behind to avoid getting fingerprints on the front.

The other tip that I kept coming across was to keep the Plasti Dip as warm as possible. One person said if you shake the can and it feels cool to your touch, it’s not warm enough. The common suggestion is to keep it in a bucket of the warmest water you can stand. I did that, and set the bucket in the sun. Warmth was not a problem (smile). But don’t overheat the thing, like over an open flame, or in the microwave. The former could make the can explode, and the latter will cause bad things to happen with your microwave.

I did two base coats, then four cover coats, and I’m quite happy with how it turned out.

I’ve decided I’m going to keep the bike for a while, so why not personalize it?

My goal is to come close to the coloring on the Honda F6B. I really like the blackout treatment they gave it. I’ll definitely Plasti Dip the rotor cover and all the chrome around the front fender. I also want to dip the front and rear crash guards, but those will be a bit more difficult to get to, since I’ll have to remove some of the Tupperware to pull them off. I probably won’t do the saddlebags the way they did though.

I don’t think I can color the engine parts the way Honda did on the F6B, as I suspect that’s done in the casting process. I haven’t decided about the exhaust pipes either. If I do color them, I’ll probably have to have them powder-coated, due to the heat (Plasti Dip doesn’t tolerate the high temps you’ll find on an exhaust pipe).

I’ve also got a list of several other things I want to do. Some of them are simple, like switching the lights to mostly LED bulbs, and upgrading my stereo speakers. Some are more involved, like upgrading the stereo itself. The existing unit is a proprietary design, and the space won’t hold a conventional car stereo. I’ve read several accounts of people putting a marine-grade unit in there, but that involves some custom bodywork that I’ll have to have done.

Yeah, I’m going to have fun with this.