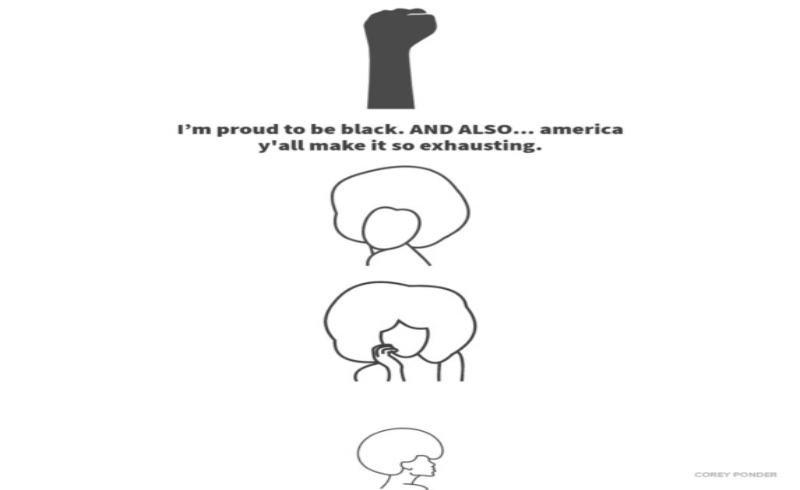 I am proud to be black. And also…being black is exhausting.

For every “for the culture” moment that lifts our spirits to the sky, there are at least ten other tragic moments that come along and clip our wings. It feels as though America has made a sport of watching us plummet from heaven to earth. We sprout wings to survive, only to fall victim to the cycle of this tragic bloodsport.

It makes no sense that black men and women die at the hands of police officers every day, just for doing basic, mundane things. Especially when this country heralds its commitment to “innocent until proven guilty” (and Fourteenth Amendments) as a facet of American exceptionalism. Black men and women are murdered by the people sworn to uphold the U.S. Constitution on a presumption of guilt while or in the neighborhood, playing in the park, in their homes, in their homes, or around the neighborhood. And we’ve seen countless stories of white Americans ready to weaponize cops at a moment’s notice to reinforce that point — you are one presumption away from death, so act as expected. That these victims can be blamed based on how they present, what they were doing prior to arrest or death, or their reactions to police in the moments before tragedy only furthers my belief that our humanity eludes us in the eyes of enough people in society to maintain this presumption of guilt as the status quo.

I’ve seen mentions of the stressfulness of being a police officer and making split-second decisions without acknowledging the training they receive in order to be able to do precisely that or to deescalate situations. Meanwhile, that same empathy isn’t applied to understanding being black in America. To live in a country where symbols such as flags or statues still remind you that it was only about 150 years ago that we were praying, fighting, and hoping to be free. To live in a country where domestic terrorists were treated like vigilante heroes as they terrorized black lives and police officers could be counted among white supremacist allies and sympathizers. To live in a country where people still cannot acknowledge the fact that slavery was a bad thing and slaves weren’t enamored with benevolent masters, probably because people can’t confront the fact that America, and by extension, its long line of families and leaders, were complicit in the bondage and deaths of human beings. To live in a country where the status quo is a gap between black people and white people across multiple indicators when controlling for other differences. To live in a country that consumes black culture, black dollars, and black contributions to society, but can discard or dismiss the black bodies that represent all of this.

I am proud to be black. And also, being black is exhausting.

Every time another black person dies at the hands of police officers, it is a reminder of the leash that comes with my blackness. Every time a new Permit Patty, Central Park Karen, or Starbucks Kevin story surfaces, it is a reminder of the limits of my access to this society. It’s like being reminded that there are things in this society that I don’t have clearance for, and access to the little I have can be taken away at a moment’s notice. And my clearance can be taken for any reason — any emotion, any reaction, and demand. Too angry and I’m threatening, too demanding and I don’t know my place. It’s best to be stoic: to learn patience through pain and resilience through wrongs. Except, stoicism usually means that only I sit with and process the trauma; only I am doing the work of figuring out the next steps and what it looks like to move forward. Meanwhile, time marches on, and when righting an injustice, time always feels like it is on the side of the unjust.

That stinging reminder is a perpetual cycle of fatigue and frustration that spirals down into hopelessness. I want to believe after George Floyd that we have galvanized sentiment in a way that will break the cycle. That Floyd’s humanity will not be pushed aside. That people’s anger and frustration are symbolic of a broader recognition that this shouldn’t be happening and that things need to change. That many things can be true about the officers, including that they are responsible for their actions. That Floyd’s death isn’t just a procedural misstep or accident. However, like waking up in a loop, I realize that I’ve lived this cycle dozens of times before, each time with only slight changes to the narrative of black people in this country, anchored in a bigger world where we can’t even begin to comprehend all the ways in which we are still slaves to a broader will and controlling force that values unchecked power above all else.

Unfortunately, these names are a fraction of the countless stories that share a similar loop. I want to see the beauty of this world, but each new name highlights only the ugliness and the disarray.

I am so proud to be black. And yet…it is so exhausting.

Before I made it through kindergarten, I’d already been taught to not touch anything in a store, to avoid being accused of stealing. Before I made it through elementary school I learned I couldn’t behave the way white kids did in class because I would get suspended whereas they would just get a verbal reprimand. I also had been told being in a class for gifted students might set back students like me, students who need a strong foundation in the basics (even though my test scores proved otherwise). By fifth grade, I was called “nigger” for the first time for winning a kickball game. By middle school, I learned how easy it was to be mistaken for another black person and suspended for something I didn’t do. By high school, I learned I needed to work harder and advocate even harder to be in the same “spaces for smart and talented people” as non-black people. I learned there were certain sides of town you didn’t drive through because black people weren’t welcome there. I learned to be afraid of police officers. I learned what it feels like to be mistreated by one after my first car accident with an older white male who crossed center-line, hit me head-on, tried to drive away, and stumbled out of the car drunkenly when the cops arrived with no consequence. Even as I learned to believe in my capacity to do anything I put my mind to, I received 18 years of education on the reality of being a black boy, which added a conditional clause to that belief that always started with “but, because you’re black….”

I am so proud to be black. And also, being black is exhausting.

We have the legacy of our ancestors who chanted, prayed, and fought their way through circumstances to make things just a bit better for the next generation. From slavery to Reconstruction, and Reconstruction to “separate but equal”, our story is one of resilience and survival. In the 60s, we saw black people and allies fight to smash the loop; we are powerful when we mobilize, unify, and raise our voice and our resources across multiple tactics for change.

But more than 50 years later, some things feel too similar. In 1967, President Lyndon B. Johnson formed the Kerner Commission to look into the causes of violent riots across America, and one of the key findings tied the riots to racial tension exacerbated by a flawed justice system, poor housing, high unemployment, voter suppression, and several other issues. Rather than take a hard and honest look at the ugly truth, President Johnson chose to ignore the findings of the report he commissioned, and a majority of white Americans rejected the findings of the report, electing Richard Nixon the following presidential term, who ran on a law-and-order campaign.

Growth only happens when we choose to be uncomfortable or to become more comfortable with discomfort. 1967–1968 was a lost moment; 2020 shouldn’t have to be another. Justice for George Floyd is about more than accountability for his murderers; it’s about finally dismantling the roles race and racism play in doling out justice in the criminal system, and then doing the work to understand how race and racism create limiting narratives and loops for George Floyd’s all across America that have even more limited options for endings: an arrest, poverty, or tragic death.

Being black is exhausting and in this society, often uncomfortable. And I am tired. I don’t get to walk away from being black when it becomes overwhelming. In order for America to truly move forward, allies across the racial spectrum will have to feel these tragedies the same way. This pain isn’t a nine-to-five and these tragedies reminding me of the precarious nature of being black in America isn’t something I have the privilege to shut off or shut out. If there is one thing I’d want most from allies on days or months like this, it would be that superpower: a “get out of black” free card or a magical cloak that bestows the wearer with 24 hours of unquestioned privilege. But, in lieu of that, what I want most is for allies to be exhausted with me — 7-days a week, 24 hours a day. I want allies to constantly think about every decision they make in a day, and whether those would be the same decisions I could make. I want allies to see this moment not as a single moment of outrage but as a lifetime of rage.

To be a Negro in this country and to be relatively conscious is to be in a rage almost all the time.

This article isn’t a playbook for allies. That information is out there and the levers we need to pull to make this a fair and just society have been enumerated by so many others that I respect. This article is rage, pain, and exhaustion. I just hope you don’t leave that all behind after you close this window.