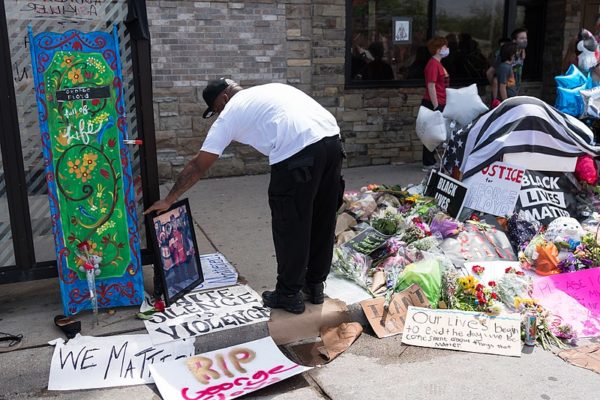 The list of unofficial criminal offenses that Black people can be killed for continues to grow. We can’t drive while Black (Philando Castile), jog while Black (Ahmaud Arbery), or sleep while Black (Breonna Taylor). And now, with George Floyd, we can officially add breathing while Black to that lineup of senseless violations.

It’s a never-ending demoralizing loop marked by a distinct pattern. If it’s a police-involved murder, the names of the officers are seldom released immediately. Local police unions step in and make a statement without verified evidence to present to the public. The officers usually get paid administrative leave. When it’s all over, there is no justice. Never any justice.

George Floyd’s murder at the hands of police is literally too close to home. The incident happened at 38th Street and Chicago Avenue, a block from Phelps Park, where I played growing up. Like Eric Garner in New York, Floyd’s “I can’t breathe!” cries were captured on video:

I can’t move. Everything hurts. Give me some water or something, please. I can’t breathe, officer.

Floyd was right; they did kill him. An officer, Derek Chauvin, had his knee on Floyd’s throat for eight minutes while the man begged for his life. Witnesses begged the four officers involved to let him up. As people got closer, one officer threatened the crowd with a can of mace. Onlookers yelled that Floyd’s nose was bleeding, that he wasn’t resisting arrest, and that he couldn’t breathe.

Floyd, who had recently been hospitalized after contracting Covid-19, was allegedly arrested for “attempted forgery.” And as punishment, he was murdered by police in front of a crowd. In handcuffs. A full-grown man kneeling on his throat. “He survived corona and couldn’t survive going to the store,” said Vanita Williams, a witness who knew him.

If history repeats itself, police and reporters will pry into every detail of George Floyd’s life, looking for justification for his murder. That’s what happened in 2016. About 10 miles from where Floyd was killed, a police officer shot and killed Philando Castile during a traffic stop after Castile notified the officer that he had a legally registered handgun; at the time, conservative media leaped to falsely depict Castile as an armed-robbery suspect. With Chauvin hiring the same attorney who represented Castile’s killer — who was subsequently acquitted of manslaughter charges — it certainly seems like the same script is gearing up again.

No justice. No justice. Never any justice. It’s a narrative as old as time — and we’ll see if it remains true in my hometown yet again.

I write about politics, race and social justice. Support me at https://ko-fi.com/williamfspivey0680

Facebook15Tweet3Pin1EmailShares19
wpDiscuz
0
0
Would love your thoughts, please comment.x
()
x
| Reply
Share this ArticleLike this article? Email it to a friend!
Email sent!