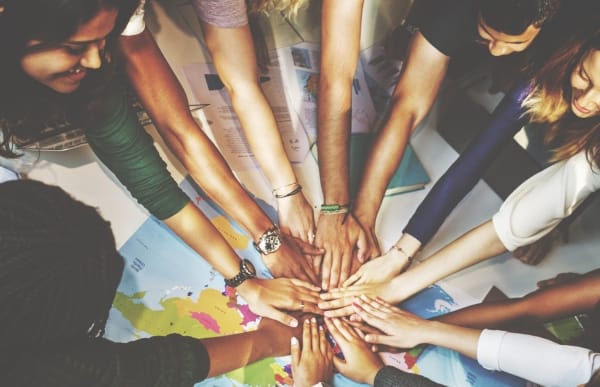 Franklin D. Roosevelt warned us about it.

H.P. Lovecraft told us it’s the oldest and strongest emotion.

Martin Luther King insisted it’s the reason we don’t get along with each other.

They were all talking about fear.

If humanity ever had a “frenemy,” it’s fear. It’s the first example of the proverbial double-edged sword, something that is both blessing and curse.

Fear has served to protect us from danger since the time when all we had was caves, sharp sticks, and fire. But it can also override our conscious minds and cause us to react without thinking—as individuals and in mobs—lashing out when something scares us.

Continuous bombardment by stimuli that makes us scared saps the mind’s ability to listen, learn, and understand. Is it any wonder, then, that we saw so much anger, misunderstanding, and division over the course of the 2016 election in the United States?

In this age of the 24-hour news cycle, which depends on viewership and clicks for survival, tapping into our fearful animal-bias towards negativity is a vital tool to gain market share.

The Price of Ignoring Fear

It should be no surprise then that Trump won the presidential election, thanks to his skillful use of fear as a motivating factor. He expertly spun nightmare scenarios, such as invading hordes of terrorists disguised as Syrian migrants, China decimating us economically, and a “rigged” system that suppresses the common people.

People ask, “how did that guy get elected?” Simple: we underestimated the power of fear to motivate people to vote.

But we need to stop focusing on Trump as the problem. We need to keep an eye on the real culprit, Trump’s power source: fear. It is the oldest and most well-worn tool in the demagogue’s repertoire.

Let’s be clear: fear is not more powerful than what Abraham Lincoln called the “better angels of our nature.” He was referring to the abilities unique to humans among the species on this planet, namely our ability to be rational, mindful, and cooperate.

But where were our better angels when it came time to vote for our next president? Their wings were tied down by the chains of our fear.

Who chained down the angels that live within the human soul?

It was all of us.

We All Started the Fire

It’s time to take personal responsibility for the state of our nation and the world. Each and every one of us.

Be honest with yourself: could you have done more over the course of your life to listen to the fears of others? Did you ignore—or worse, belittle—the troubles of others? Did you fall into the ever-present trap of assumption that no one in their right mind would vote for a fear-mongering candidate?

Note the words “right mind.” Is anyone motivated by fear ever in their right mind? No, not according to the scientific facts of our biology.

Clearly, we dismissed the fears of great swaths of the U.S. population, to our collective shock and potential detriment. We’re all responsible for spreading the fear that infects our nation, whether through action or inaction.

So, the big question: what can we do to reverse the damage?

The Fight Against Fear

Now that we’ve been made painfully aware of how many scared people are out there, this is an opportunity to start spreading self-awareness, open-mindedness, and tolerance.

The crisis/opportunity before us is to move forward together. We need to make a real effort to try and understand each other, rather than see each other as fools and objects of ridicule. This is how we become a nation motivated by hope, not fear.

Let me put it another way: stop just blurting out the Gandhi quote about being “the change you want to see in the world,” and actually start being the change.

This means being the bigger person, and “going high,” as repeatedly suggested by the Obamas.

Yes, this means you may have to make the first move in the effort to reach across our deep divides, and try to understand those who think, feel, and believe differently than you.

Yes, in the course of your efforts you may come under attack or be ridiculed.

You Are a Change Maker

Right now, more than ever, let yourself be powerful. Let yourself be the strong person you know you are deep down. If there was ever a time to be self-confident and self-loving, it is NOW. The world needs you to be strong.

Notice I didn’t say “be selfish.” Being self-reliant doesn’t mean you need to be a loner who eschews the company and the beliefs of others. It actually means the opposite: someone who is confident in their convictions can open themselves up to working with others.

The temptation to dismiss others as cardboard cutout stereotypes is powerful, I know. But think about it: do you like to be seen as one-dimensional? If not, seriously think and give others the benefit of the doubt. Do you really think other human beings are the simplistic creatures they appear to be from the outside?

More likely, the people you see as “bad” or “evil” are probably just as complex and prone to fear as you are, and they need your help to rise above fear and its offspring—hate, prejudice, and judgment.

You might not change people with your words, no matter how well-written or thought-out. But you just might change their feelings about you and the world with your actions, which many claim speak louder than words.

Yes, there are people who actually do revel in evil and chaos and truly want to do others harm. But, I will bet you that there aren’t nearly as many of those people as you think.

It’s time for everyone to dig deep and go beyond earthly politics and see a bigger spiritual and human picture. Trump and Clinton and all the other power brokers in the U.S. don’t determine your ultimate fate as a human being. You should work to be good with yourself, and not depend on anyone else for the solutions to your problems.

It doesn’t matter what your political leanings: work on yourself first. Then, be open to the problems of others. When others see that you have empathy for them and aren’t treating them as inferior, you’ll be surprised at how fast the divisions between us fall away.

Prepare yourself spiritually, mentally, emotionally, and physically to become ready to face whatever circumstance throws at you. That’s way better than depending on a single human leader in a position of power to “make life all better.”

Across the world’s mythologies, legendary heroes are those few who are able to overcome their fear of what is beyond the known world, in order to go where no one else will.

Now is your chance to be a hero that rises above the narrow-minded intolerance of our time. Use this opportunity to really commit to consciously creating the better world you want, rather than waiting for someone else to do the work.

We can either keep attacking each other and being cynical about the future, or we can start helping our fearful fellow citizens realize they don’t need to be so afraid.

Some people theorize about the possibilities of gamifying your life. I say that if you give others the respect they don’t give you, while on a mission of conquering the negative effects of fear in the world, I give you permission to believe you have “won” life!

If enough of us start the chain reaction of hope and understanding, we can win our long battle with fear. That’s way better than getting the highest score in any game you’ve ever played.

This post was previously published on www.livethehero.com and is republished here with permission from the author.