Get Daily Email
Join/Login CLOSE
Home / Featured Content / ‘Manning-Up’ to Domestic Abuse: Why I Stayed and Why I Left 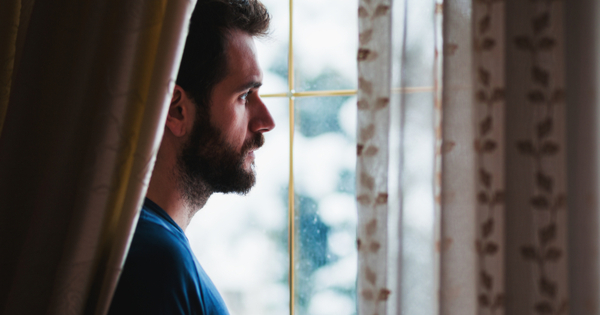 If it was that bad, why didn’t you just walk out the door?

Sounds simple, right? The caller on the radio show had a valid point. I was caught in an abusive relationship, so surely if I’d have had any sense, I’d have followed a straightforward, 4-step plan:

Step 1) Phone my friend/mum and get some lodgings sorted.

But leaving isn’t as simple as it sounds, not for women OR men who are caught in abuse. There are complications which lock people in, leaving them with few places to turn to and limited options for getting out.

These are the issues, which any loving father caught in an abusive relationship must consider if he is thinking about leaving … but there’s more!

What if that same father is in two minds over whose fault the abuse is?

On a rational day, he knows it’s not normal to feel sick every time his partner is annoyed: the late arrival home from work, the broken wine glass, the noisy children creating a mess … these are trivial issues and trivial issues shouldn’t cause; a dry throat, sweaty palms, rapid breathing, even chest pains. This just isn’t normal.

But on a less rational day, he’s a loser, a wimp and never measures up to the other ‘real’ men. If only he could be wiser and stronger, then the abuse might stop. Self doubt leads to self hatred and he starts to believe he deserves the abuse …

simply walking out the door isn’t so simple after all, is it?!

I was a traditional and modern man wrapped into one. I got married for life and divorce was unthinkable: any decent man fights for his marriage, for his family, for his kids, so I fought the only way I knew how… by serving my wife, appeasing her, and by trying again and again to be that better husband.

Then one day, a line was crossed and there was no way back. (Fidelity was important to me, I’m a traditional man, right? The more she tried to cover it up, the more the web of lies became absurd) I faced a life-changing decision: stay in the marriage as a shadow of my former self, (setting a lousy example of fatherhood to my daughters), or leaving, and recognising that life would be agonisingly painful for a while, but that ultimately, it would get better.

Ten years on and I’m blissfully remarried, my daughters were eventually moved to my care by the courts, we have 3 joyful young boys under 7 (who are also a bit of a handful) and I am a repaired individual. I’m not bitter because I take some responsibility for my part in what was a dark and destructive relationship. I was naive and had no sense of boundaries: these weaknesses were not my wife’s fault, they were my issues and they contributed to the grotesque partner dance which ensued.

If you’re caught in an abusive relationship and wonder what it would be like if you left: the grass really is greener on the other side of the hill, but if you want to get to the greener pastures, you first have to crawl through the stinking slime, there is no clear and easy path. So get crawling, meter by meter, never give up and don’t look back!

END_OF_DOCUMENT_TOKEN_TO_BE_REPLACED

Facebook12TweetPin1Email1Shares14
wpDiscuz
Share this ArticleLike this article? Email it to a friend!
Email sent!