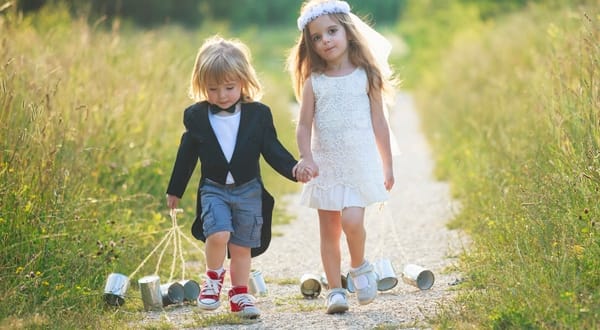 —
A while back I watched a television program focusing on the troubles of a very young married couple. There were multiple problems and disagreements in the marriage involving money, division of labor, raising the children, and inappropriate ways of fighting. The Rev. T. D. Jakes from Texas was a guest commentator on the program. He captured my attention when he bluntly told these two young people that marriage was for adults. His implication was that they were not mature enough for the responsibilities they had taken on.

It got me thinking about what the necessary characteristics or knowledge might be for someone to be ready for marriage.

A question often asked is when does someone become an adult? By law, a person is officially an adult when they turn eighteen. It is at this magic age a person can make decisions without getting permission from or answering to another. But this arbitrary age doesn’t take into account the current information about the brain not being fully developed until one’s early twenties.

In addition, if one is still a student, that person can be carried on their parents’ insurance policy and continue to be included under their tax return. It is also illegal to drink until the age of twenty-one. So, is that when you become an adult? Or is it graduating from college? Is it when you get that first real job or take on paying your bills? Is it when you get married? When your first child is born? What is it that makes someone an adult and ready to handle the responsibilities and obligations that entails?

My view is that none of these subjective moments really define when someone has crossed the threshold into adulthood. I believe becoming an adult requires a deliberate frame of mind that is independent, but not necessarily unrelated, to a specific date or life event.

This mindset requires the ability to recognize your impact on others and to alter your behavior accordingly. It is the ability to examine two conflicting needs and weigh them objectively before making an action or taking a position. To paraphrase a line from the movie The Rookie, it is okay to do what you want to do until it is time to do what you were meant to do. Until a person is capable of setting aside their own wants and desires and do what is required by the job at hand, they are not yet an adult.

And make no mistake — marriage is a job with specific requirements and levels of proficiency. Being successful at it is not a function of age or longevity. It is a matter of developing the necessary skills and using them appropriately.

AGE IS JUST A NUMBER

Richard is a man in his sixties who came to me just after he and his wife of over forty years separated. They had been unhappy most of their married lives and things had finally come to a head. Richard was very aware of his personal strengths and weaknesses and really wanted to learn how to do things differently even if the marriage couldn’t be saved. Over the course of a few sessions we addressed what he was doing and why. I also provided him with some possible explanations for why his wife was reacting the way she was.

He recognized that when faced with the choice of getting his own needs met or meeting those of his wife, he met his own every time. It then became clear why he was being met with resistance and discontent by his wife.

He and his wife reconciled once Richard was able to view the relationship as about them and not just him. At his last session, Richard was as happy as he has ever been. The profound difference is that he had finally grown up and was willing to approach his marriage as an adult.

So, are you an adult?

If not, what needs to happen for you to grow up?
—