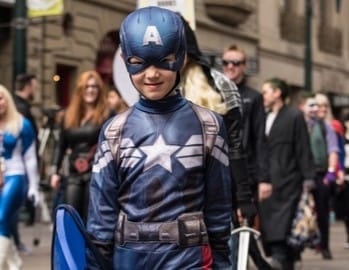 My son is a huge fan of Captain America. He has a foam red, white, and blue shield, and every so often he likes to stop and salute, shield in hand. “Sir, yes, Sir!” he’ll say, standing at attention.

He also loves flags. When we walk around the neighborhood we have to stop at each one so he can admire it. Sometimes he salutes the flag, too. He’s proud of the fact that his daddy was a soldier, once. America to him means a place where anyone can be anything, where heroes exist.

But my child is transgender. His salutes fill my heart with a hint of anger and a whole lot of sadness because I know that in reality, it may come to him not being allowed to serve if he wants to. That he’d be denied even trying out to become a Captain America.

Don’t get me wrong; my spouse and I are both unenthusiastic about the idea of our children joining the armed forces. We respect those who do, but my spouse’s experiences, while more good than bad, included things they’d rather not put our three children through.

Ultimately, we always tell our kids what they choose to be and do when they grow up is up to them. So if, someday, my son wanted to be a soldier, we wouldn’t forbid him. But the government might.

For trans soldiers, they’ve been left in limbo, unsure of where they stand when their Commander in Chief tweets about their ability to serve, and when the courts decide whether or not they have the right to volunteer to risk their lives for their country.

I can’t help but think of my boy in his Captain America costume, holding his shield, and saluting. The anger I feel stems from my feeling that the country he loves might not love him back. Its leader certainly doesn’t. The sadness comes from the realization that someday he may understand that not everyone will be so supportive, and not everyone will allow him to simply be who he is. For now, I’ll salute him back when he dons his Cap paraphernalia, knowing he’s my hero, no matter what the current administration thinks.

Facebook131Tweet3PinEmailShares134
wpDiscuz
Share this ArticleLike this article? Email it to a friend!
Email sent!