Paternity leave can go a long way toward building the kinds of businesses that attract and retain workers. It also increases corporate profits and builds gender equality — if done right.

Unfortunately, it’s still very rare in America. Despite receiving increased attention in recent years (for my own legal case and the issue at large), the “average amount of parental and caregiving leave that U.S. employers offer has not changed significantly since 2012,” the Society for Human Resource Management reports. About 58% of women and 15% of men get some replacement pay for leave after having a baby.

New research shows just how much men want paternity leave. Sixty-nine percent of fathers, and 66% of mothers, say they would change jobs if necessary to be very involved in the early weeks or months of caring for their child, according to a survey by Promundo and Dove Men+Care. (I partner with the latter and had the chance to help design some of the questions in the nationally representative survey, which we announced at Carnegie Hall in New York.) 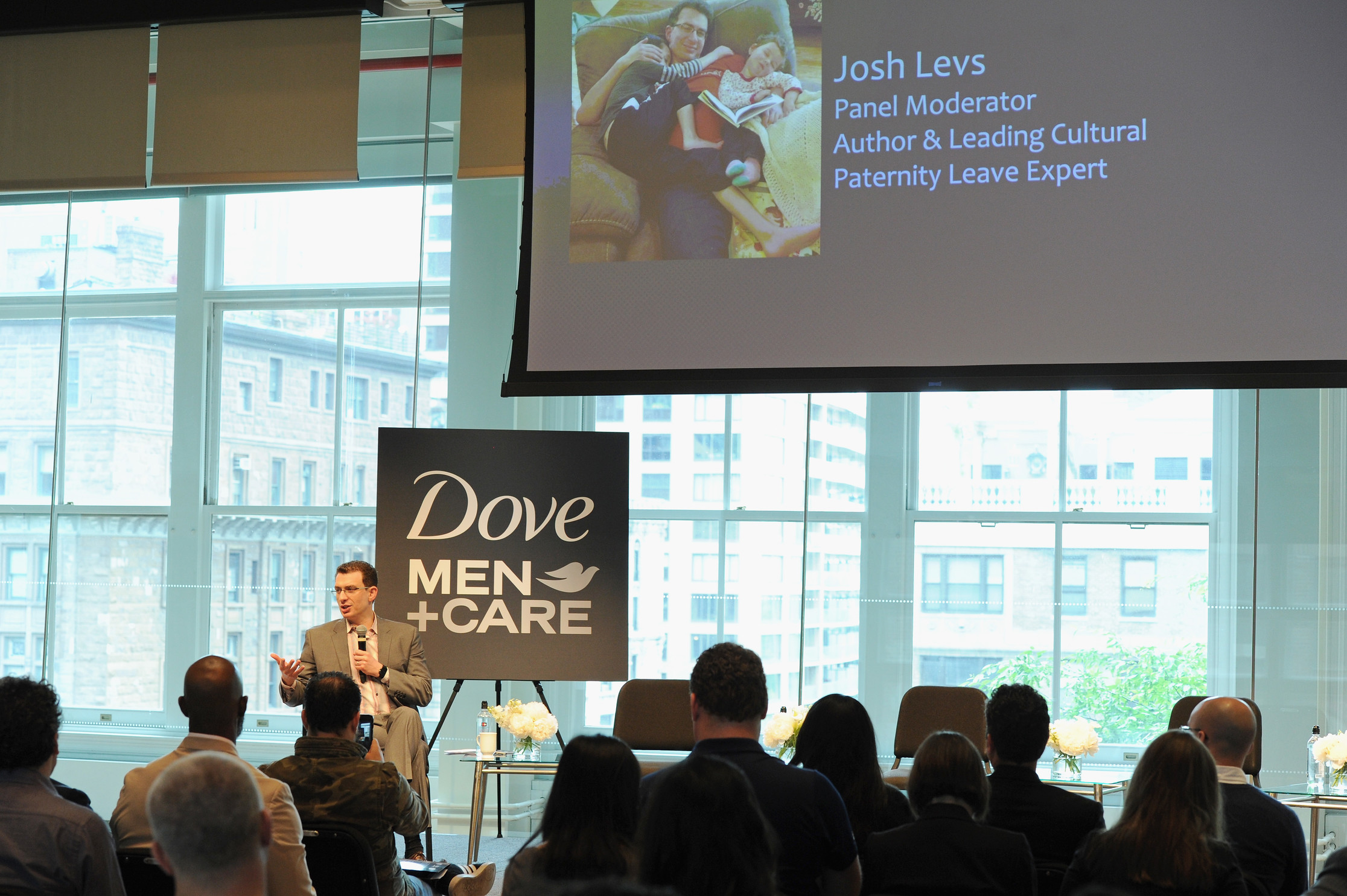 This isn’t the first time we’ve seen that men want to work at organizations that have paternity leave. EY also found that men are even more likely than women to switch jobs or careers, take pay cuts or move in order to have more time with their families.

Paternity leave also makes workplaces more desirable for women. As Sheryl Sandberg, COO of Facebook and author of Lean In, told me in an interview for my book All In, “l have had both women and men who’ve said, ‘I came here (to Facebook) because of your policies, and because of what it says about rewarding and wanting fatherhood.’”

It’s little surprise. Workplaces that offer paid paternity leave build greater gender equality. When only women are able to take paid leave to care for a new child, men and women are pushed into traditional gender roles. Choices are taken away from families. When both women and men have a real opportunity to be caregivers, they also get equal opportunity to stay at work and advance their careers.

To see the impact on businesses, look at what happened in California after it instituted a paid family leave insurance program. Women and men now have access to paid leave who did not have such access before. The result: the vast majority of businesses say paid leave has had a positive, or at least neutral, effect on: “productivity (89 percent), profitability/performance (91 percent), turnover (96 percent), and employee morale (99 percent).”

I’ve spent many years covering all sorts of business policies. Paid family leave — which includes paternity leave — is one of the most successful policies I’ve seen.

This helps explain why at Etsy, for example, the announcement of a new parental leave policy came from the senior director of culture and engagement. And around the world, executives are taking note. A VP of HR for a corporation in India, for example, wrote a blog post calling on businesses to start paternity leave, noting that it “can change organisation culture.”

I’ve seen these cultural improvements play out. With paternity leave in place, men feel that the business respects them as fathers, and women feel that they won’t face sexist assumptions that they’ll always be caregivers. It promotes a greater sense of commitment, belonging, and being a part of the same team.

But all of these benefits only apply when the paternity leave is backed up by a culture that makes it a real option. Unfortunately, even among the rare businesses that offer it, many see that men are afraid to take it. That’s because across the country, men have been fired, demoted, and lost job opportunities when they’ve taken the paternity leave available to them. 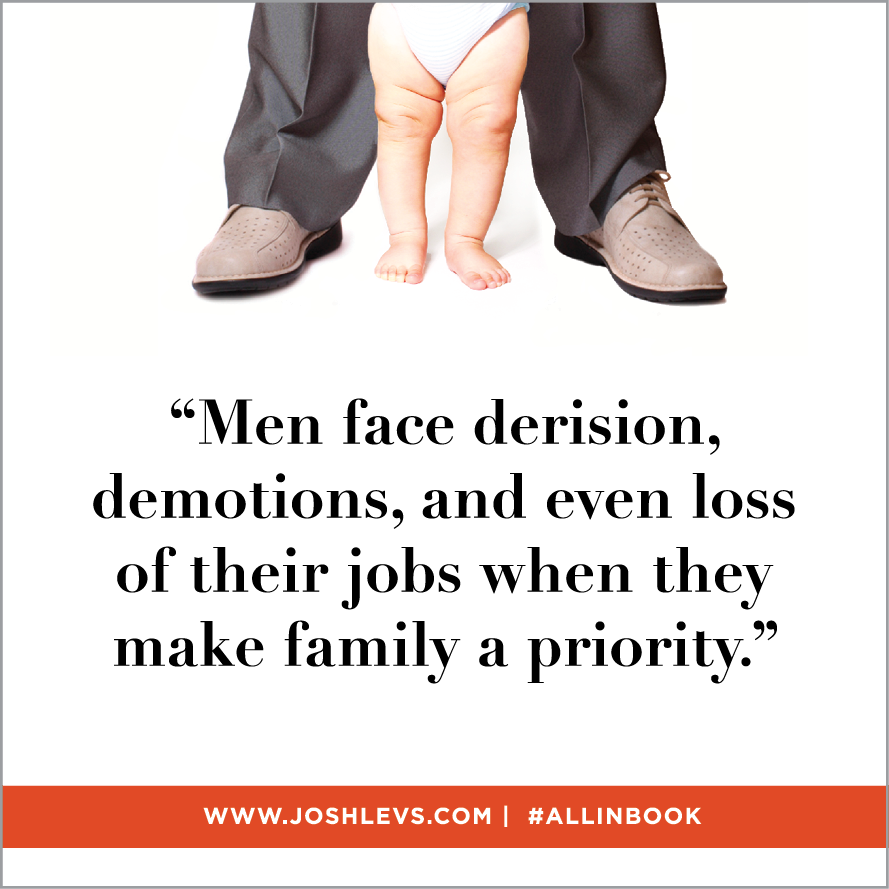 Our new study found that 73% of dads agree there is little workplace support for fathers, and one in five men (21%) fear the worst of the consequences in the workplace — losing their job — if they take the full amount of paternity leave offered.

This is why businesses benefit from actively encouraging men to take the time allowed. It increases attraction and retention, saving businesses a great deal of money. (SHRM notes that it can cost up to 200% of annual salary to replace an employee.)

And companies are finding that the payoff applies in an immediate way as well. “We feel it’s important for all new parents to take time off, so that when they return to work, they’re refreshed, less stressed and at their best – focused, engaged and productive,” Coca-Cola said in announcing its paid leave policy. Other companies say the same.

Many people are still unaware of the many benefits of paternity leave, our survey found. So moving forward, it’s important to get the conversation going — and to educate our colleagues and bosses, all the way up to the C-suite.

This post was originally published by LinkedIn and is republished with permission from the author.

Josh Levs is an award-winning former NPR and CNN journalist, business consultant and the leading global expert on modern fathers at work. He's the author of All In: How Our Work-First Culture Fails Dads, Families, and Businesses-And How We Can Fix It Together, winner of the Nautilus Gold prize. Learn more at joshlevs.com.