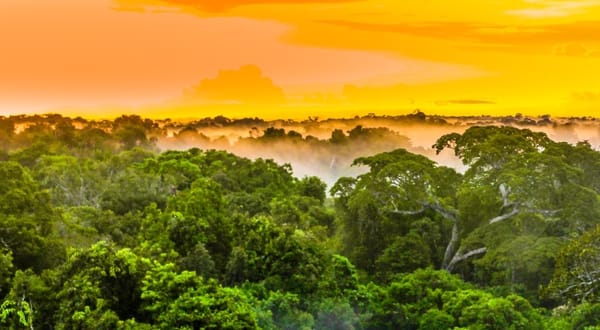 The rainforest, though, is also a major source of economic income for the countries of that region. Brazil is the biggest country of northern South America and also has the largest chunk of the rainforest. For years, the forest’s natural resources have been exploited for personal and economic growth of the country. The land that lies beneath the forest is also rich in nutrients and the climate is extremely suitable to grow certain crops. “Development” is the buzz word.

For years, there has been a major conflict between parties that demand ecological protection of the forest and the parties that seek to exploit the forest for all it’s economic riches. Today, that conflict continues to burn…

GOING BACK AND FORTH…

However, in the last 20th century and the first decade of the 21st century, global initiatives on sustainable management and the protection of forest resources prompted many NGOs to push for the protection of the Amazon and the sustainable management of it’s resources. Aided by strong government decisions and better law enforcement, the country became one of the frontrunners for sustainable development as it curbed the deforestation and illegal use of forest resources.

All of these efforts resulted in a steady decline in deforested area, and the figures reached an all-time low at 4571 sq kilometers in 2012.

All this is slowly changing. Public pressure owing to economic recession and many corruption scandals resulted in lower funding for environmental law enforcement since 2012. As the figure shows, the amount of deforested land is slowly increasing. In 2017, the figure stood at 6624 square kilometers (source). Today, the conservative coalition of the government seeks to further decrease the strength of environmental laws and open up sections of the forest for development. This push comes on the back of one the worst recessions in the country. The government is keen to open vast regions of the forest for road construction, mining and agricultural activities.

There is legislation being circulated in the government to also weaken the environmental licensing systems of the country, making it much easier to obtain permission for mining and energy activities.

In 2012, changes in the forest law resulted in weaker environmental laws and scraped all the fines for deforestation prior to the year 2008. This let many offenders go scot free, and it is likely that they are back doing what they always did; illegally clearing away forests. Since larger and larger parts of the forest are being cleared, speculations are rife that big organizations and companies are funding the illegal deforestation.

MONITORING OF DEFORESTATION IS BETTER; YET WEAKER

How is the rate of deforestation monitored? Improvements in remote sensing have allowed scientists and law makers to observe the changes in forest cover and land use around the Amazon over a span of a few days. The results are also available online, allowing the government and the voters to actually see what is going on.

This increase in monitoring does put pressure on the government to curb large scale deforestation. However, a bird’s eye view is not enough.

Remote sensing does not allow the monitoring of illegal activities below the canopy of forests, and these activities include collection of NTFPs. For this, on-foot monitoring is required. This is difficult because of the lack of manpower as well as the recession that the country is facing. For example, only 47 agents to monitor environmental crimes in Amazonas, the country’s largest state in the Amazon region, which covers an area of about 1.6 million square kilometers (source).

A lot of the stakeholders directly involved in agriculture and other activities bordering the Amazon were promised benefits by adopting the sustainable management approach. However, these benefits are yet to be delivered. This has angered local farmers who have returned to their old ways to ensure their survival. The biggest problem in Brazil is that there seems to be no better economic model other than exploiting the natural forests of the Amazon; many people do so with a heavy heart and quiet desperation.

MUCH, HOWEVER, RESTS WITH THE GOVERNMENT…

It all comes down to the elections to be held later this year, many scientists feel. The government formed will control the future of the forest. Current forerunners for the president include former environment minister Marina Silva and a leading conservative candidate Jair Bolsonaro. A conservative government will probably be bad news for environmental groups, ecologists and the forest at large.

This post was previously published on www.eco-intelligent.com and is republished here with permission from the author.
—
—