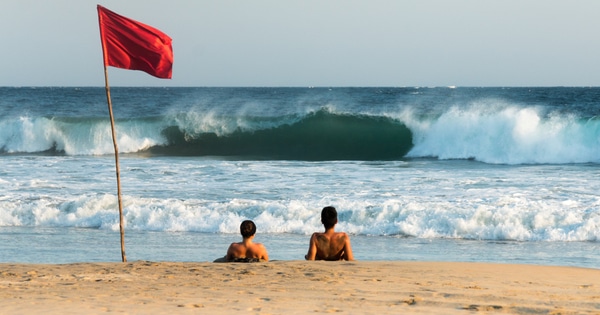 What if some deal-breakers turn out to be no big deal?

Deep down, all couples in successful relationships are rule-breakers. That’s because they’ve ignored those classic “red flag” signs.

You know, the dealbreakers that would usually make you head for the hills. In a new Reddit thread, couples in long-term relationships were asked: “What were some ‘red flags’ you have ignored but had no impact on your relationship?” The answers are a reminder that love conquers all.

A lack of experience doesn’t mean a lack of love, people.

“Met my husband when I was 28 and he was 25. He had never had a girlfriend. He had several opportunities but was very picky (his friends told me this – he’s very attractive and hilarious). It made me nervous to be his first but it was also very flattering.”

Sure, it’s one thing to know who Justin Bieber is, but what about musicians from other eras and genres?

“She saw Lord of the Rings and asked me if it was based on a true story. We watched Ray (movie of Ray Charles’ life) and asked me if he lived long enough to SEE the movie. I’m still in love because she’s golden and has made me a better man.”

Does the best sex of your life need to be with your life partner? Not always, according to this story.

“We don’t have the best chemistry in bed. I had many boyfriends before my husband and have a very liberal way of approaching sexual life (kind of like ‘whatever makes you happy if no one gets hurt!’), and he’s very conservative and ‘vanilla’. I definitely had better sex in my life than with my husband. But I had never loved or felt loved as much as with him, and we’ve been happy for five years, expecting our first child, enjoying every moment of being together and having a good and loving sexual life.”

4. He lied about a crucial life fact.

Sometimes, lying can come from a good place – truly.

“He lied to me about graduating college. Come to find out he was trying to finish school (24 years old). I told a friend and she said, ‘OMG, he will always be a liar! He probably cheats too. Dump him!’ Turns out he was just embarrassed to tell me the truth. I kept my distance for a while, but after seeing him bust his hump to finish school while working full-time, I knew it was a one time mistake. Married almost eight years and three kids later, he works just as hard as ever, and is very honest and trustworthy.”

5. He’s obsessed, and head-over-heels in love.

Undying, obsessive love can be a turn-off, but this couple made it work.

“I met him on a Internet forum and like three months later he sold everything he had to move clear across the country to be with me. It was damn fast and it sucked for the first year because he couldn’t get a job. I had to work four jobs. Never again. Seven years later and I still love him.”

6. He asked for her father’s permission to marry her… and her dad said no.

The old-fashioned tradition of asking for a woman’s hand in marriage can backfire sometimes…for the best.

“When I asked my wife’s father for permission to marry her he said no and given previous issues there was a chance of having to cut off contact with her family if we moved forward. There were threats designed to make her change her mind about me. Cutting off financial support for college (which they followed through on), not walking her down the aisle, lots of emotional abuse and manipulation. None of these were red flags about her but it definitely made for stressful times. We’re approaching five years now though.”

“When we started dating, my husband use to quit jobs whenever he didn’t feel like going to work that day. That was almost 12 years ago (10 years married). Now he is a very hard worker: he always goes to work early and has been successful in his career. He has never put our family in a financial bind – even staying in jobs he didn’t like until he found something better. For him, becoming serious about marrying me made him want to be a dependable man.”

8. She doesn’t want to get married.

“BAD CLOTHES – I still battle with this daily. My partner has no style and it used to bother me greatly. But then I realised clothes were just clothes. And since he doesn’t care about them, he will wear whatever I buy him. PROBLEM SOLVED.”

“I used to have a thing for guys who were older than me. My first boyfriend was six years older. And at the very least, I would only date guys who were my age or above. No cradle-snatching for me, thanks. Then my dream guy came along, and asked me out… only he was three years younger. I said no, because he was only 18 and I was 21. How could that possibly work? It turned out that it did work, because we’ve been together for 11 years, and have been married for eight of them.”

More from The Glow:

Why My Divorce Was the Best Thing I Ever Did

Insightful Comments Psychologists Have Heard From Patients About Mental Illness

The 9 Worst Habits For Your Mental Health

Mamamia.com.au is one of Australia’s most popular websites for females under 40, discussing the latest trends, issues and what everyone’s buzzing about.

#3 is pretty much a given. The best non-connected sex I’ve ever had is with women who weren’t very healthy (then again neither was I). Women who are great in bed usually have had lots and lots of practice and/or they use sex as a form of currency (usually as a means to feel loved). Vanilla sex can be extremely hot if there is deep emotional intimacy that precedes it. Just my opinion of course.

“We don’t have the best chemistry in bed. I had many boyfriends before my husband and have a very liberal way of approaching sexual life (kind of like ‘whatever makes you happy if no one gets hurt!’), and he’s very conservative and ‘vanilla’. I definitely had better sex in my life than with my husband. But I had never loved or felt loved as much as with him, and we’ve been happy for five years, expecting our first child, enjoying every moment of being together and having a good and loving sexual life.” – I can see this one heading… Read more »

I suspect she woke up and realized all the hot sex she was getting was coming from men (no pun intended) who were emotionally unavailable. My guess is that she screwed a few players in her time.

Hot sex isn’t what keeps a relationship together. I have been with lots of women who were amazing in bed. None could keep my attention for long. I think the secret to is to find someone who knows you…everything about you-even the crap you swore you’d take to your grave and still loves, accepts and supports you regardless of your past.

Why do women do what? What is it that you think a woman is denying a man by marrying one who didn’t have as much sexual experience? I suspect different people have different priorities. I suspect for these women, sex isn’t as important to them as other happinesses. Just like how some people place an importance on fitness over intelligence or intelligence over fitness. Or like how men will marry less attractive women when he’s been with more attractive ones or will look at more attractive women while he is in a relationship. I will just say men do this… Read more »

I would argue that it’s not necessarily virgin-shaming (which is deplorable and perpetuates unhealthy gender norms for men and women)– my initial thought with this is more about the maturation of tastes. For my first few boyfriends, I thought I had found “the one”/”what I wanted”, until I got older and had dated more and realized that what I thought I’d wanted from relationships and a partner had changed significantly. If I were dating someone and I were their first girlfriend, and he proposed to me, my concern would fall more along the lines of, “Wait, but I’m the only… Read more »

This can be somewhat true. Except male virgins do not have countless derogatory names thrown at them daily to remind them of their sexual histories, virgin or not. Women are called four letter words daily to control our bodies and it happens on mainstream tv to pornography. Women get called names just for having the nerve to wear a short skirt or even worse, for getting sexually assaulted. The social shaming of women also happens to the grand majority of women at some point in their life. Whereas, males who are virgins might experience this as young men , but… Read more »

Facebook2.2kTweetPinEmailShares2.2k
wpDiscuz
Share this ArticleLike this article? Email it to a friend!
Email sent!