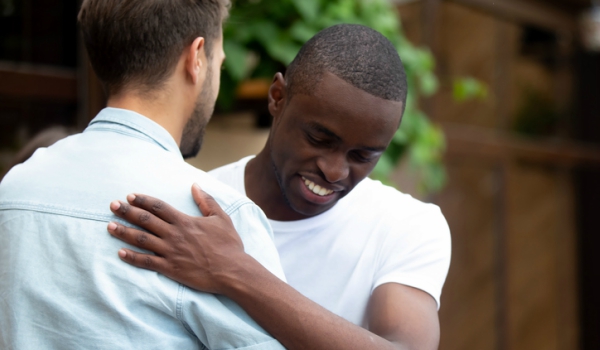 Thank you so much for your essay on loneliness. It felt like the story of my life. I am currently seeking ways to free myself from the closet. I am older, not young. Maybe it’s beginning to happen now. I have read much about liberating myself from what I call “the shackles of lies and hypocrisy.” For me, religion has been a big difficulty. I’m trying my best to overcome my religion’s expectations and living a lie in the closet.

I was raised a Lutheran and at one time thought I’d always be a Lutheran, but when I came out to my mother, she went to her pastor, who told her, “Loren is going to hell unless he changes his ‘lifestyle.’” I left formal religion for the next twenty years but returned after I discovered an open and affirming church where I felt at home as an openly gay man. Lutheran churches are not all the same, and many have since moderated their stance on sexual orientation. But the point here isn’t about one religion or another. The point is that religious beliefs vary even within a church umbrella, and religious beliefs also evolve. It appears there is no “One Truth.”

I am not a religious or biblical scholar; in fact, I try to avoid it. Candace Chellew-Hodge, who serves as the pastor of Jubilee! Circle in Columbia, South Carolina, is also the author of Bulletproof Faith: A Spiritual Survival Guide for Gay and Lesbian Christians, a book that helped me wind my way through the minefield of Christian dogma. Pastor Chellew-Hodge writes the following in “Why I Give Zero F*cks What Anti-Gay Christians Think”:

For some reason, we have agreed that the orthodox, evangelical, literal-translating “Bible believers” ideas about God and homosexuality actually have some sort of authoritative merit. Here’s the news flash: They don’t.

One man with whom I correspond delayed his coming out largely because of religious beliefs. He wrote this:

I did some research on homosexuality in the Bible. The Old Testament stuff can be largely ignored, in my opinion, because there are too many absurdities there to even list. The New Testament, translated from Greek, has turned Greek words that meant pederasty and prostitution into homosexuality. Paul, who actually didn’t meet Jesus until after His resurrection, writes the most about sex. He wanted to get rid of the common ancient Greek and Roman practice of pederasty. It didn’t really have anything to do with Jesus’s teachings. And it actually didn’t have to do with homosexuality as much as it did pederasty. The word “homosexual” didn’t even show up in the Bible until 1946. People undoubtedly had their own agenda in adding that word too. I found this all very interesting.

The word pederasty was a word I hadn’t even heard until some anti-gay Christian slung it at me. I had to look it up. He was conflating the words pedophilia with pederasty. Pedophilia is sexual attraction to a child; pederasty is sexual activity with an adolescent. The age at which one can legitimately consent to sexual activity is debatable, but almost everyone would agree that children need to be protected. Whether or not an adolescent can make a mature decision about sexual activity, some of them are certainly deciding to have sex. Some are more capable than others of making a good decision; some need to be protected.

I once had a young patient from Africa who was hospitalized for a mental health issue so serious that his wife, who had remained in Africa, was asked to come to the United States to help care for him. She was fifteen years old and the mother of young twins. When I said to him, “But she’s so young,” he responded, “Dr. Olson, you don’t understand our culture.” And I didn’t. While I do not advocate for adolescents having sex, their ability to make mature decisions varies greatly depending on many socioeconomic and cultural factors. This young African woman dealt with this difficult situation with a level of maturity that many American adults can only envy.

The other argument religions make against same-sex behavior is that it is “unnatural” because sex should be only for the purposes of procreation. This argument seems specious. In his book The Selfish Gene, Richard Dawkins makes a compelling case for why every species seeks to pass on its genes, sometimes through supporting “relatives” who carry similar genes. The book Zoobiquity: The Astonishing Connection Between Human and Animal Health, written by Barbara Natterson-Horowitz and Kathryn Bowers, is a natural extension of Dawkins’s theories, suggesting that nonreproducing members of a species, like gay men and women, through their nurturing roles contribute to the survival of their species, thereby increasing the odds of similar genes being passed on.

It’s high time we stop giving a fuck what the evangelical, anti-gay Christians say, or believe, about homosexuality. Why? Because they don’t have a clue. Not just about science and biology and years and years of research around the subject, but because they don’t have a clue about Jesus or God or anything they claim to have a corner on. In reality, they are just as dumb as any of us about the reality of God’s will, God’s nature or God’s intention for any of us. To take their word about homosexuality as “gospel” (which is a complete bastardization of the “good news” such a word is meant to convey) is to give them a source of authority that they do not possess.

Many churches are open and affirming. You have options, and you certainly aren’t alone in looking for a belief system and church that accepts you as you are.

This post was previously published on Lorenaolson.com and is republished here with permission from the author.