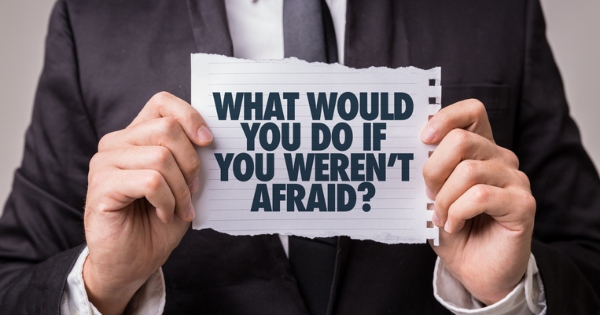 —
It might seem strange that a productivity consultant is here to offer you advice about conquering your fears, but that’s precisely what I’m about to do. In consulting with clients, I’ve found that fear holds many of them back. It prevents them from unleashing their true talents.

Change is scary. Whether it’s building a business, investing in stocks, changing jobs, becoming a parent, there is a certain amount of fear involved and that scares some people. Too often, they’ve been burned before and are afraid to make the same mistake twice.

Right off the bat, it’s important to understand that every one of us has fears. Some to a larger extent than others but we all have them.

So how did I overcome mine? I believe it was the late great public speaker Zig Ziglar who came said, “F.E.A.R. is false evidence appearing real.” In my case, that was certainly true, especially with cockroaches. Think about it logically for a second, we are literally giants compared to them. If anyone should be afraid, it’s them. We can crush them with one step, no wonder they scurry around when they are under our feet.

I realized this when I was about 13 years old, so I decided the only way to overcome my fear was to face it head-on. I called it “cockroach patrol.” At 8 pm every Friday, while my parents watched TV, I wandered around the neighborhood armed with a flashlight and a flyswatter! When my friends heard this, they thought I was crazy. (I suppose I was) However, it was just crazy enough that before long, I had a few friends asking if they could come along. Part curiosity, part entertainment. After a while, the novelty had warned off and my mission had been accomplished. The lesson, the best way to overcome your fears is to simply go do them.

Darren Hardy, one of my virtual mentors, was asked by his son what skill should he learn to be successful. Hardy’s answer – sales. Like most people who get a job in sales for the first time, it was rough going. Hardy’s son heard “No” a lot. But after about six months of hearing it, his fear of rejection had vanished.

So how does fear relate to productivity? Unfortunately, fear can cause paralysis. I’m not talking physically, but more mentally. People are afraid to make decisions that could potentially hurt them, and instead do nothing. They “freeze.”

I’ve been an entrepreneur for almost 20 years and have worked with many different people over that time in a number of capacities. From a teacher to a coach to a consultant. I also offer some people the opportunity to work under me. It’s not a paid job, but rather a chance for them to learn valuable skills with a potentially big payoff. Most people though just want a paycheck. They aren’t willing to work for free.

I think back to the words of Jim Rohn who used to say, “If you work hard on your job, you’ll make a living. If you work hard on yourself, you’ll make a fortune.” I took this to heart and have invested time in myself, always on the lookout for the opportunity to work for successful people. My job helps me pay the bills. The rest is to build my future. I know there are people out there that take advantage of others, but that’s a valuable lesson to learn as well.

Before you have kids is the best time to try things which is why before my son was born, I got involved in many different things. In part to make money, but moreover to learn. And boy, did I learn (haha). I’m still paying for some of the lessons I learned.

But those lessons helped me grow. They made me go outside my comfort zone and tested my limits. I’m still doing that today, though my risks have become more calculated.

In case you’re wondering what was the greatest lesson I’ve learned is from facing my fears? Internationally- known speaker and acclaimed author Keith J. Cunningham said it best, “I know of no single more important factor in reaching business success than surrounding yourself with the right people.”