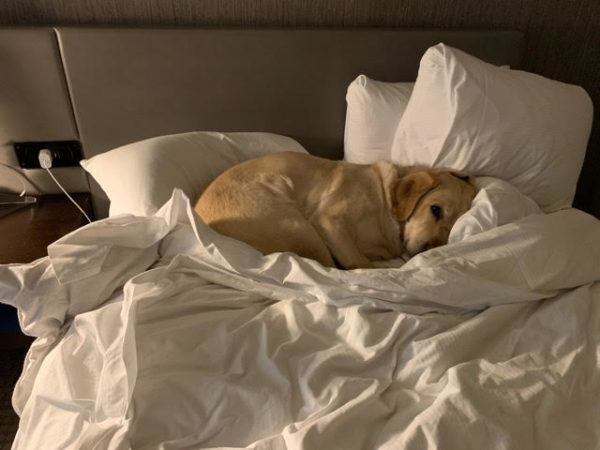 Mark Twain wrote: “We can secure other people’s approval, if we do right and try hard; but our own is worth a hundred of it, and no way has been found out of securing that.”

I like this quote but think Twain got it wrong. As a disabled man, I know that I cannot secure other people’s approval so long as I insist on my rights or what we like to call “equal rights” and therefore the only way I can secure self-approval is by insistence. I insist that I belong at this meeting, in this room, on this airplane, in the voting booth, in your taxi, theater, hotel, swimming pool, university, library, railway, hell, even your amusement park.

I do not get customary approval for this entreaty and that is painful, at least on the inside where the barbs from others must go. I secure my affirmation from public resistance and I’ll take my public scorn with a twist of lemon, thank you very much.

Last week I had two plane flights where—despite the laws of the land—the airline wouldn’t seat me and my guide dog (or “seeing-eye dog” as they’re sometimes called) in a place where we could fit. In each case, I cited the applicable law (the Air Carrier Transportation Act) which makes it clear that they have to put us where we can fit. And in each case, I was treated with absolute disdain and then hostility. The airline was Delta but it could be any one of them.

I was angry, humiliated, and yes, embarrassed; the flight attendants were not only inhospitable they made me the problem. We call that ableism in disability circles and like racism or homophobia it’s all about the knee jerk assumption that someone different is a lesser being and can be treated as such. This is why all bigotry hurts all others. If Chic-Fil-A thinks it can object to LGBTQ people on a phony religious principle, then they can also object to me and my guide dog. Disdain carries a permission index that’s portable.

The Delta Airlines flight attendants not only didn’t care that I couldn’t fit in their seat, but they also didn’t care about the law—which says they have to move me to a place where I can fit. They did not want to be bothered. The overheated cigar tube was being crammed with passengers, the public address system was smoking with imprecations to tag your bag because the overhead bins were full, please sit your ass down, we’ve got a schedule to keep, etc.

And there I was with a guide dog who couldn’t fit under my seat. I crammed her head under the seat in front of me and sat with my own feet tucked under my ass like a chic woman on a divan. Try doing that for five hours.

The story is worse than this. A woman seated next to me was rude. She didn’t like sitting next to a dog. A flight attendant appeared, (remember, they didn’t try to reseat me) and in front of me asked her if she minded sitting where she was.

I can’t get the approval of strangers and I have no idea what Mark Twain meant. But I have my own satisfaction. I tell the truth.

That’s what civil rights are for.

Stephen Kuusisto directs The Burton Blatt Institute’s Interdisciplinary Programs in disability at Syracuse University where he holds a University Professorship. He is the author of the memoirs Planet of the Blind (a New York Times “Notable Book of the Year”) and Eavesdropping: A Memoir of Blindness and Listening and of the poetry collections Only Bread, Only Light, and Letters to Borges. His newest memoir, Have Dog, Will Travel: A Poet’s Journey is new from Simon & Schuster. A graduate of the Iowa Writer’s Workshop and a Fulbright Scholar, he has taught at the University of Iowa, Hobart & William Smith Colleges, and The Ohio State University. Professor Kuusisto has served as an advisor to the Metropolitan Museum and the Museum of Modern Art in New York and the National Endowment for the Arts in Washington DC and has appeared on numerous television and radio programs including The Oprah Winfrey Show; Dateline; All Things Considered; Morning Edition; Talk of the Nation; A & E; and Animal Planet. His essays have appeared in The New York Times; The Washington Post; Harper’s; The Reader’s Digest; and his daily blog “Planet of the Blind” is read globally by people interested in disability and contemporary culture. He is a frequent speaker in the US and abroad. His website is: www.stephenkuusisto.com

Facebook20Tweet5Pin1EmailShares26
wpDiscuz
Share this ArticleLike this article? Email it to a friend!
Email sent!