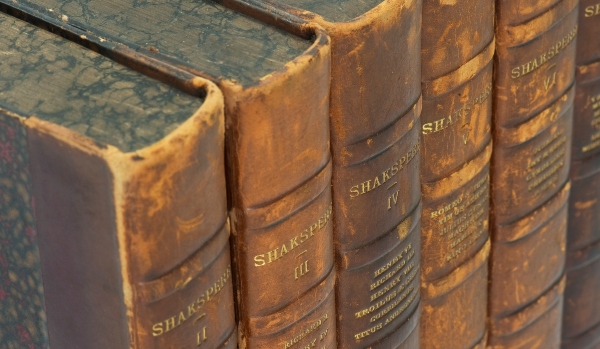 Of course, Shakespeare was a Christian. It was a crime to be otherwise in a time when church attendance was enforced by law. But whether he believed the supernatural dogmas remains a topic of debate.

Although there are few records of his life, Shakespeare undoubtedly received Anglican indoctrination as a schoolboy at Stratford, eighty miles northwest of London. All pupils were required to memorize and recite long segments of scripture.

Shakespeare married, but evidently left his wife and children behind in Stratford when he went to London in the 1590s. He began writing poetry, and became involved in theater, both as actor and playwright.

His plays contain references to God, as well as to ghosts, fairies and witches. What he personally believed seems impossible to learn. Obviously, Shakespeare did not share the beliefs of England’s Puritans, who sought everywhere to stamp out play-acting and theater-going as wicked. For a time, he lived in the bawdy Bankside district of London, hotbed of prostitution and carousal; yet some researchers say Shakespeare lived more sedately than Christopher Marlowe, Ben Jonson and other theater colleagues.

Near his death, after Shakespeare had grown wealthy and returned to his family in Stratford, he wrote a traditional Christian testimonial into his last will. Authorities disagree over whether it was sincere, or a formality. A half-century after his death, an Oxford chaplain wrote that Shakespeare “died a papist” – but most scholars doubt this assertion. Perhaps, like many people, the bard wavered in matters of religion. A definite answer seems unknowable.

In Shakespeare’s plays, believers tend to see evidence of faith, and skeptics signs of doubt. At the height of the Enlightenment, freethinker Joseph Ritson wrote that Shakespeare was free from “the reigning superstition of his time” and subscribed to no “temporary religion,” neither “Papish or Protestant, Paganism or Christianity.”

Atheistic philosopher George Santayana wrote an essay titled “Absence of Religion in Shakespeare,” commenting on the bard’s “strange insensibility to religion.” Santayana said it is remarkable that “we should have to search through all the works of Shakespeare to find half a dozen passages that have so much as a religious sound, and that even these passages, upon examination, should prove not to be the expression of any deep religious conception.” At another time, Santayana remarked: “For Shakespeare, in the matter of religion, the choice lay between Christianity and nothing. He chose nothing.”

As for the meaning of life, in all his profound passages, Shakespeare never says that the purpose of human existence is to be saved by the mystical Jesus and go to heaven. Instead, in Macbeth’s great lament (Act 5, Scene 5), he bitterly contends that each life proceeds to oblivion without ultimate meaning. The soliloquy is a classic of existentialism:

Creeps in this petty pace from day to day

To the last syllable of recorded time;

And all our yesterdays have lighted fools

The way to dusty death.

Out, out, brief candle!

Life’s but a walking shadow, a poor player

That struts and frets his hour upon the stage

And then is heard no more; it is a tale

Told by an idiot, full of sound and fury

“In religion, what damned error but some sober brow will bless it, and approve it with a text, hiding the grossness with fair ornament?” – The Merchant of Venice, Act 3, Scene 2

“Thrust your head into the public street, to gaze on Christian fools with varnish’d faces.” – ibid, Act 2, Scene 5

“Thou villain, thou art full of piety.” – Much Ado About Nothing, Act 4, Scene 2

“His worst fault is, he’s given to prayer; he is something peevish that way.” – The Merry Wives of Windsor, Act 1, Scene 4

“I always thought it was both impious and unnatural that such immanity and bloody strife should reign among professors of one faith.” – Henry VI, Act 5, Scene 1

“Modest doubt is call’d the beacon of the wise.” – Troilus and Cressida, Act 2, Scene 2

“Thou art a proud traitor, priest … gleaning all of the land’s wealth into one, into your own hands, cardinal, by extortion….I’ll startle you worse than the sacring bell, when the brown wench lay kissing in your arms, lord cardinal.” – King Henry VIII, Act 3, Scene 2

“We are such stuff as dreams are made of, and our little life is rounded with a sleep.” – The Tempest, Act 4, Scene 1

“I tell thee, churlish priest, a ministering angel shall my sister be, when thou liest howling.” – Hamlet, Act 5, Scene 1

(Haught is editor emeritus of West Virginia’s largest newspaper, The Charleston Gazette-Mail. This is a chapter from his 1996 book, 2000 Years of Disbelief: Famous People With the Courage to Doubt, Prometheus Books, all rights reserved.)
—