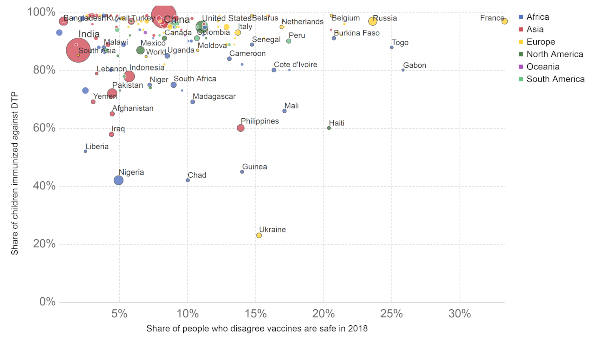 Our World in Data presents the empirical evidence on global development in entries dedicated to specific topics.

This blog post draws on data and research discussed in our entry on Vaccination.

According to the new Wellcome Global Monitor, most people (92%) globally think vaccines are important for children to have. In our related post on the topic we looked at how public opinion and support of vaccination varies around the world.

While vaccine skepticism is globally low there are some countries where the levels of skepticism of the safety and effectiveness of vaccines were high. In France, for example, 1-in-3 respondents disagreed that vaccines are safe.

How much does this matter? And where does this skepticism come from?

The crucial question to ask when considering the importance of vaccine skepticism is: does it actually have an effect on behaviour? Does it really affect the share of children who are vaccinated?

In the chart below we see the comparison of vaccination rates – here as the share of children who were immunized against diphtheria, pertussis and tetanus (DTP) in 2015, the latest year available – to the share of respondents in a given country who disagreed that vaccines are safe.

You can also see this relationship for measles vaccine coverage.

Overall we see that widespread public concern for vaccine safety does not appear to be strongly correlated with vaccination rates. While one-third of the French public disagrees with their safety, 97% of children in France are vaccinated.

There are numerous other reasons, however, why vaccination rates in some countries are low: in low-to-middle income countries the availability, affordability and access to vaccines can be poor. Having low coverage rates often doesn’t reflect the population’s view of them. As the chart shows, in many poor countries the situation is the opposite as in France: the vast majority of the population considers vaccine safe, but only about every second child receives the DTP vaccine.

One country which stands out is Ukraine: there we see that vaccination rates are uncharacteristically low for its income level – less than 1-in-4 children receive the DTP vaccine. Skepticism of vaccine safety in Ukraine is high at 15%.

Is there evidence that skepticism is reflected in cases and deaths from vaccine-preventable diseases? Over the last few years there has been a reported rise in the number of measles cases in countries which had previously been close to eliminating the disease. In Europe, for example, there were more than 34,000 cases of measles in the first two months of 2019 alone. Ukraine accounted for the majority (more than 70%) of these cases. And here as well as in Albania and Romania some measles cases led to the death of children.

The visualization below shows the relationship between the share of people who trust doctors and nurses in their country and share who disagree that vaccines are safe. Overall we see that countries with higher levels of distrust in the safety of vaccines tend to also have less trust in health professionals.

There are however some outliers: France has relatively high trust in health staff, but are most mistrusting of vaccine safety.

Health officials are worried that skepticism of vaccination will begin to translate to lower vaccination rates. One reason being attributed to higher skepticism is the spread of misinformation on social media.

Social media firms do have a responsibility for dealing with misinformation and need to consider how to react carefully. Currently, social and online media companies are being asked by politicians in the US and UK to ban or control anti-vaccination messaging. Banning or strict control could reduce the exposure to such messages but does not solve the root problem: the public are asking questions about vaccines and are looking to find answers online. A worry is that banning certain sorts of information and groups will fuel suspicion and only drive activity elsewhere.

Nonetheless, demands on social media firms to act is increasing. A request for action by Adam Schiff to the CEOs of Google and Facebook sparked a cascade of responses. In an open letter, he asked for action against vaccine misinformation and similar demands have been made since, from the UK Health Secretary Matt Hancock among others.

What can be done to counter misinformation?

If denial of vaccine safety and effectiveness is high in some demographics – particularly through the exposure of vocal skeptics online – how do we tackle this?

A recent study published in Nature tried to address the question of what is effective in rebutting scientific misinformation in public discussions. Its analyses focused on misinformation on vaccination and climate change. Overall the results found that being exposed to denial arguments without a rebuttal had a negative effect on trust and support of vaccination.

The study also suggests that rebuttal is more effective in some demographics than others. Although rebuttal had a positive impact on all audiences, it suggests it had a larger positive impact on conservatives than liberals in the US. And it was particularly beneficial among audiences with prior beliefs or an ideology that makes them particularly vulnerable to science deniers.

Overall, evidence suggests that public rebuttal of facts is effective in countering misinformation.

This post was previously published on OurWorldinData and is republished here with a Creative Commons Liscence.