Get Daily Email
Join/Login CLOSE
Home / Featured Content / Sure, It Can Backflip. But Can a Robot Hold Down a Desk Job? 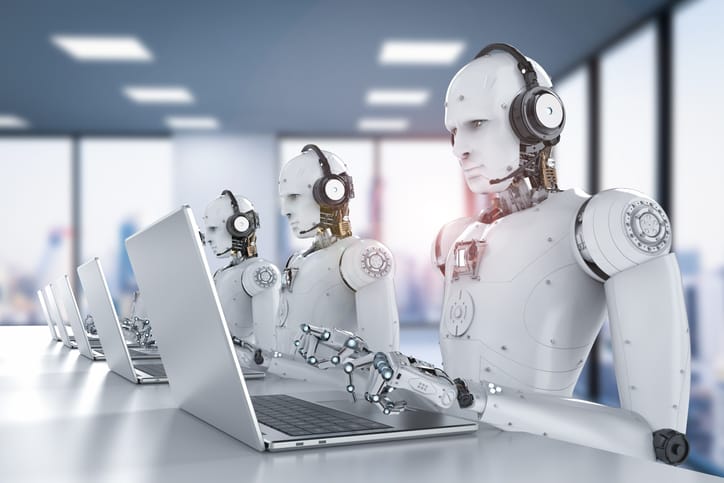 A colleague of mine, a roboticist, recently proclaimed that if one could teleoperate the robot he developed in his lab, it could hold down a desk job. It’s a common sentiment among roboticists that existing mechanical hardware is sufficient to replace humans in many of the tasks by which we earn a living. Rather than the hardware, the last, golden step to having human-like machine counterparts is in the development of appropriate algorithms. But this is wrong. There is in fact little evidence that robots have the mechanical features necessary to hold down a desk job, regardless of the algorithms.

Roboticists such as my colleague love algorithms. Many of them grew up playing video games where the challenge was thinking through the correct set of actions, out of a predefined set of options, corresponding to little, discrete buttons on a gamepad, in a virtual world. To beat a video game is to find the right sequence of actions.

What many roboticists don’t realise is how incredible, and incredibly complex, their own movement is in the real world – even in the most frequently encountered tasks. They tend to divide the world of movement into convenient, opposing categories:

These categories have their uses, but they also create blind spots for those looking to quantify and replicate the movement of natural systems – or predict the future impact that these machines will have on our lives.

In dance, my other professional home, the quirks of human behaviour are something to be celebrated, explored and even exploited. Dance resists and actively thwarts such easy categorisation. The idea of ‘stillness’ is not present in the Laban/Bartenieff movement system, a taxonomy that formalises a set of interrelated, overlapping features of movement, connected through dualities that make rigid categorisation of bodily action impossible. This system describes the process by which dancers and choreographers create their innovative designs of human movement through the lens of Laban movement analysis. This embodied form of qualitative analysis describes the idea of ‘active stillness’, which acknowledges the amount of motor activity involved in holding any particular posture. Under the academic lens of dance, all of the above polarities break down:

So what does it take to ‘hold down a desk job’? Let’s assume the robot has a wheeled base and two robotic arms attached, operating inside the relatively controlled environment of an office building with a custom desk to accommodate the unusual, if somewhat anthropomorphic, shape of this machine. The robot will not be autonomous; it will be teleoperated by a human. As analysts breaking down choreography, let’s look at all the things that a human does – that a human moves – in order to stay employed at a seemingly ‘sedentary’ desk job. For these tasks, even if given the correct series of instructions from a human operator, extant robots would fail.

Fold precisely a large piece of paper in one try: there are factories where specialised mechanical structures fold paper autonomously every day, but they do not employ humanoid robots. My colleague’s robot would be ridiculous in such a space; it’s advantage is meant to be in multipurpose activity. But, today’s humanoids would easily fail at the kind of folding that humans do, gently navigating the crease down at the exact moment that the whole paper will bend, using haptic and visual feedback. In the images below, an elbow, the surface of a forearm and the tips of several fingers guide the unwieldy sheet in concert. Today’s robots would ruin the paper by creasing at the wrong time, or simply not be able to control the large flexible surface.

Paper clips: when picking up a paperclip, humans inelegantly plop their hand down into a tub of clips. We don’t aim for one, we just aim for the whole jar. Once we’re there, we roll our hand around, taking advantage of multiple articulated end points, picking up one or even a dozen, and then quickly finding a grip on just one and releasing the rest. Robots are typically programmed to pick up just one object at time. This task would take many retries, to the irritation of the boss.

Unstick a label from itself: sticking labels to things is an important aspect of many jobs. Such labels peel off easily from skin and not so easily from metal and plastic. While a machine perfectly aligned to repeatedly stick labels to the same object day after day has no trouble, a machine at a desk job might receive a myriad of different object and label sizes – it, like you, might take a couple of tries to get it lined up correctly, but, it, unlike you, will struggle to overcome misaligned attempts.

Pick up a piece of paper, fallen in a tight space: if paper falls between the baseboard and your desk leg, you might not immediately be able to reach it. Often, what’s required is an initial, unsuccessful reach, and then a twisted, contorted accommodation, your scapula sliding down your back, your pinkie finger eking out sideways just a bit as you lean into your forearm, finding the squishy muscle giving just a bit, so that you gain some additional clearance around a radiator and … there! You’ve got it. Today’s robots wouldn’t have all these extra choices that allow humans to navigate tight spaces. These machines typically have rigid links that only rotate – not translate relative to one another as bones can, ever-so-slightly, do. If the robot dropped an important piece of paper and were unable to retrieve it, or it left littered pieces of paper all around its desk, I doubt it would keep its job.

Appropriately laugh at an inappropriate joke: we’ve all been there. Your boss or coworker makes an off-colour joke. Regardless of how you decide to react, you have to walk a fine line if you want to stay in their good graces. You can, of course, choose not to laugh. Or, on the other extreme, you can give a hearty bellylaugh. These two options are probably both liable to put you in a difficult position. On the one hand, not laughing at all might embarrass your boss; on the other, laughing too hard could give the impression that you approve of the inappropriate joke. Therefore, you will probably elect to find something in

between. This requires leveraging your full mechanical complexity to indicate shades of approval and disapproval, simultaneously. Maybe you give a forced laugh with a disapproving eye and a half-smile, letting your boss know that you understand the joke, know it’s not appropriate, but also aren’t going to tell anyone about it. It creates a kind of social bond that can be very important at work, utilising a behaviour that robots such as my colleague’s cannot emulate.

That robots can ‘do backflips’ is an impressive feat. At first glance, the backflip seems like the peak of physical performance: so few people can do one of these! On the other hand, catching a set of oddly shaped keys, thrown without warning, splayed in an awkward shape, flying across a myriad of backgrounds – maybe in the rain at night by a drunken friend with poor coordination – is a task that almost any adult human could do but that few, if any, robots could complete.

By all means, keep watching in awe as roboticists continue to improve the mechanical feats of machines. But know that you yourself (yes, even you with a desk job who shirks the weekly exercise class), you do incredible things that we do not yet understand – that we do not yet even value.

is a certified movement analyst, via the Laban/Bartenieff Institute of Movement Studies in New York, and director of the Robotics, Automation, and Dance (RAD) Lab at the University of Illinois at Urbana-Champaign. She is the co-editor, with Magnus Egerstedt, of Controls and Art: Inquiries at the Intersection of the Subjective and the Objective (2014).