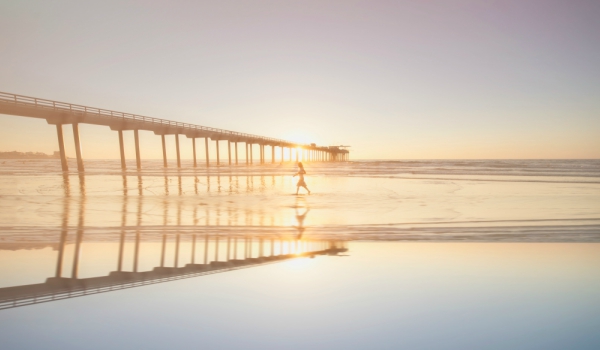 When I was 18, I had no idea who I wanted to be. I was about to leave home and start college, and the only thing I knew was that the future was uncertain.

Before I left, I tried to fight my nervosity in many ways. I read everything I could get my hands on that seemed relevant to my chosen academic field — a mix of business and engineering. I prepared my courses in advance. I sought reassurance from others that I’d chosen a good school and degree.

In the end, what helped me the most was an exercise you could file under “youthful naïvete:” I grabbed a piece of paper and wrote down “my 30 guiding principles.” Most of them were simple, like “Let go what must be let go,” “Simplify,” and, “Have no secrets.” I still have the list. It’s on my pinboard. I’m looking at it right now. So why was I naïve to create it?

First of all, I didn’t know that what I’d come up with weren’t actually principles. They were just rules.

The difference between a rule and a principle is that one is merely a guideline that follows from the other. Principles don’t break. They’re universal. Gravity is a principle. Whether it’s you who falls from a skyscraper, your cat, or a 17th-century vase, it’s not gonna end well. Gravity makes no exceptions.

In order to deal with principles, we have rules. “Don’t jump off skyscrapers” is a rule and a good one at that. Unlike principles, however, rules break all the time. Often, it’s us doing the breaking — and often prematurely.

Eventually, however, even the best rules expire. It’s part of their design. Once they no longer serve their function, they’re meant to be broken. “Don’t go faster than 30 miles per hour” is a rule. It’s useful on a poorly built road, but once that road becomes a highway, it must be updated.

That’s the second reason my list was premature: In the ten years since I wrote them down, I have broken every single one of my rules. And yet, I’m still glad I wrote that list. You know why? Because of the idea that I wanted to live by some rules — despite not knowing which ones or how or why — was enough.

It didn’t matter that the list was arbitrary. What mattered was that it sent me on a path where I would look for rules and principles everywhere, learn to tell the difference and continue to build my life around them as I went.

Today, what I’m most interested in is neither principles nor rules, but what lives in-between. That’s one of the many lessons I learned along the way: Each rule may have a lifecycle, but that cycle can repeat many times in one life. So if a rule somehow keeps reappearing, keeps proving itself as useful, and continues to hurt if I break it, that rule catches my attention.

Such rules have extended validity and therefore live right between normal guidelines and the base layer of principles. I guess we could call them ‘cardinal rules.’ As you can imagine, they’re hard to come by.

Luckily, I found some.

The 7 Cardinal Rules of Life

In 1995, Studio Ghibli, a Japanese anime company, released a movie called Whisper of the Heart. It’s about two high school students struggling with their artistic callings, their feelings for each other, and coming of age.

About a decade ago, someone extracted seven rules from the film and released them online. The original source remains lost, but they’ve been making the rounds ever since.

Like my own rules, they’re all quite simple, but much closer to timeless principles. So whoever you are, wherever you sit: Thank you.

Thank you for giving us…The 7 Cardinal Rules of Life.

Bill Gates says the worst day in his life was the day his mother died. It’s a simple reminder that we all have regrets.

We all keep past versions of ourselves in a closet somewhere, and every time we open it, we feel pain and suffering. We can’t change the people we once were, but we can make peace with them. Open the closet and let in some light. Reconcile. Otherwise, our past will forever be a drag on our heels.

Life is but a series of fleeting moments, one forever chasing the next. The only place where you can live, act and make a difference in the present. Today.

2. Time heals everything, so give it time.

Sometimes, you can’t find the power to move on immediately. Sometimes, you really want to kick yourself. That too is part of life. What you can do is allow time to pass.

I know you want to just fix everything and move on, but if you stitch a wound poorly, it’ll get worse down the road. So take the time. Take care of yourself. Your health. Your broken heart and broken parts.

Sometimes, even what heals leaves a scar. Those will be with us forever. The least we can do is let them mend properly.

3. What others think of you is none of your business.

Most of our scars come from wounds inflicted by other people. Words can hurt us more than weapons. But it’s not your job to imagine what arrows people might point at you inside their heads. The majority will never fire.

4. Don’t compare your life to others, and don’t judge them.

Instead of taking shots at others, most people decide to draw up — and lose at — another imagined game: Who’s better? It’s a moot question. We have no idea what anyone’s story is like up to the page on which we meet them.

Mark Twain said, “Comparison is the death of joy.” Worse, it’s also the birth of misery. The less you compare, the bigger your capacity for empathy. Meet people on their own terms. You won’t doubt yourself as much and be less prone to jealousy, which only leads to fear, anger, hate, and suffering.

5. Stop thinking so much, it’s alright not to know the answers.

If you’re not supposed to think about others, nor what they think, what are you supposed to mull over? What do you think of yourself? Actually, it’s fine to not think so much at all. Answers often come to you when you least expect it.

Make your choices. Choose a path. Be determined. Commit. But, once you have, let the chips fall where they may. You’ll know when to take a different fork in the road.

6. No one is in charge of your happiness, except you.

At the end of the day, what you desire most in life only you can give to yourself. You already have everything. Right inside. Feel your heart. The point at your chest. There. That’s where happiness is.

We spend all this time looking for something we can’t see because it’s not there. The outside world is only as good as what you do with everything that happens in it. Are you cultivating your experiences? Cherishing them?

If not, it’s not fuel or oxygen that’s missing. Only you can relight that fire because it rests deep inside. Choose to kindle that flame. Protect it. Hold up its light. And let it shine for everyone to see.

7. Smile, for you, don’t own all the problems in the world.

Dwayne “The Rock” Johnson has over 160 million fans. He gets a lot of letters. But none like Haley Harbottle’s.

Haley has Moebius syndrome. She’s 22. She has never smiled in her life. Haley was supposed to have “smile surgery,” but her anesthetist made a mistake and she almost died. Soon, she’ll try it again, hoping to smile for the first time.

There is someone on this planet literally dying to smile. Yet here we are, you and I, walking around, often choosing not to extend this simple, near-automatic gesture to uplift our fellow human beings.

Whatever problems plague you in your day-to-day life, chances are, they’re not all that important in the grand scheme of things. We each have our own challenges, but as long as you can smile, do it. Who knows who you’ll infect.

The True Purpose of Rules & Principles

Here’s one more thing I’ve learned about rules and principles: Many rules can follow from one principle, but you can never act on principle alone.

“Friendship should be based on loyalty” is a principle you can aspire to live by, but without the rule of “I never abandon my friends at the last minute,” it doesn’t mean anything.

When I was 18, I thought I could rein in the chaos of the world with a few well-chosen guidelines. I was wrong, but I took a step in the right direction: We can never control the world, but in learning to control ourselves, we can get better at dealing with this fact. The structure isn’t something we can project on the outside, but if we cultivate it internally, we’ll be ready to make a change when we need to.

That’s what all this rule-setting and principle-discovering taught me: Learning how to live is an ongoing process. There will always be rules to be updated, principles to be understood better, new ideas to be added to old truths.

We decide who we are in this world not once but with every action we take, every principle we value, and every rule we choose to follow. That is their true purpose: to serve us in our everlasting quest to become.

I don’t know how long the rules from the movie will last for you on this never-ending mission, but, like one of its characters, I’d like to remind you:

Facebook37TweetPinEmail1Shares38
wpDiscuz
0
0
Would love your thoughts, please comment.x
()
x
| Reply
Share this ArticleLike this article? Email it to a friend!
Email sent!