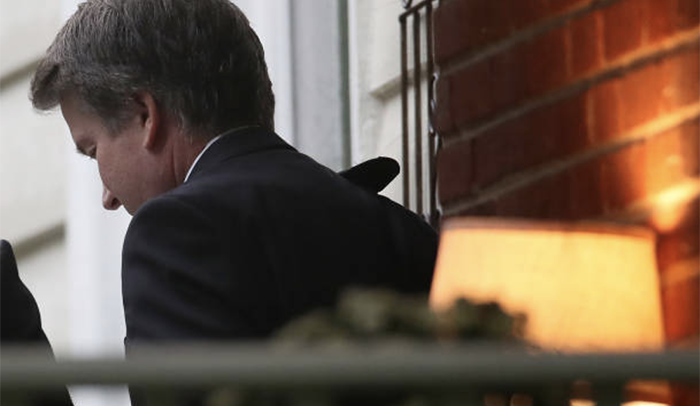 Amid the onslaught of opinions and theories surrounding the Brett Kavanaugh scandal lies yet another deeply disturbing one that few people seem to notice: Many of his defenders are calling his alleged behavior typical of teenage boys. They’re wrong. Their claims are dangerous. And they’re not just misogynistically writing off alleged violence against girls. These arguments are, in fact, also a sign of bigotry against boys.

I’m 46 years old, and can’t remember a time I’ve ever heard so many people argue that it’s normal for boys to commit, or attempt to commit, sexual assault. One of the latest came from Gina Sosa, part of a panel of Republican women interviewed by CNN. “We’re talking about a 17-year-old boy in high school with testosterone running high,” she said, adding, “Tell me, what boy hasn’t done this in high school?”

The answer: the vast majority, as far as we know. And to suggest otherwise is to encourage backward, offensive stereotypes of teenage boys as sexual predators, effectively deranged and enslaved by their hormones and primal instincts.

Let’s make this clear: Christine Blasey Ford does not allege that she and Kavanaugh engaged in consensual sexual activity, or activity that he thought was consensual. She alleges that while intoxicated, he held her down, fumbled with her clothes and clapped his hand over her mouth to silence her when she tried to scream. His friend, Ford says, watched from across the room, and both boys laughed “maniacally.”

Repeat after me: This. Is. Not. Normal. It’s far too common, for sure, but there’s no reason to believe that all or even most teenage boys have ever attempted rape. As National Geographic reported, a study found that 10% of youths cause sexual violence, and “females are just as likely to be perpetrators as males.”

Still, Sosa is far from alone in her belief. “Even if true, teenagers!” tweeted Minnesota State Sen. Scott Newman. He then said he doesn’t believe Ford and added, apparently blissfully unaware of his own hypocrisy, that her claim “seriously jeopardizes women with a legitimate claim, for who will believe them.” The Atlantic and The New Yorker have chronicled other examples of officials normalizing the allegations against Kavanaugh, even if they are true.

Where are these ideas coming from? Even the popular, sexist images of masculine teenagehood that predominated decades ago, from Porky’s to Animal House, never actually normalized sexual assault. They presented bad behavior for sure, but normalizing a teenage boy forcing himself onto a girl? No.

We seem to have reached a new era, in which people in public life are admitting that they secretly believed this about teenage boys. Either that, or they’re deciding to believe it now in order to push a nomination through. That would make this yet another step in the degradation of the GOP, which once claimed to stand for “family values” (and against Russia, our “number one geopolitical foe”).

These new suggestions come at a time that Americans, and people around the world, are facing a cultural fork in the road. The #MeToo movement is calling out men accused of sexual harassment and assault, shining a light on workplace behavior that’s persisted in the shadows. But at the same time, a loud minority of men are pushing a new era of outright misogyny.

The election of Donald Trump, after his own history of sexual assault allegations and boasting about groping women’s genitalia, already sends a terrible message to young men. (And no, it isn’t “locker room talk,” as professional athletes explain.)  Trump’s repugnant speech to the Boy Scouts only furthered the deranged messages being sent to young men.

It gets worse. After Neo-Nazis rallied in Charlottesville, Va., and one of white nationalists among them killed counterprotester Heather Hayer, the Neo-Nazi hate site Daily Stormer called her “a fat, childless 32-year-old slut.” To them, women are only meant to please men with their appearance and have children.

In Toronto, meanwhile, a man who killed 10 people had pledged allegiance to the “Incel Rebellion,” a group of the self-declared “involuntary celibate” who hate women for not wanting to have sex with them.

Perhaps these men think their behaviors are normal and natural. People in public life should make every effort possible to demonstrate to refute that — and to show them that they are the exceptions, not the rule.

Teenage boys face all sorts of pressures and challenges. Many go under the radar, unrecognized. For a powerful rendering of these, see the documentary The Mask You Live In, by Jennifer Siebel Newsom. (I was happy to be a speaker at the L.A. premiere.) Comments casting them all, or most, as attempted rapists show no understanding of, or compassion for, them.

Teenage boys need to be heard, supported, and guided — not stigmatized with reprehensible stereotypes. Most are, unlike what Trump called Neo-Nazis, “very fine people.” They’re growing, changing, and working to understand life. They’re facing their own body image crises. They are processing their feelings without sexually assaulting anyone.

We don’t know what happened with Kavanaugh and Ford all those years ago. But we do know that there is no evidence to suggest the kind of behavior Ford describes is typical of teenage boys in general. On this, we all need a big reality check.

Josh Levs is an award-winning former NPR and CNN journalist, business consultant and the leading global expert on modern fathers at work. He's the author of All In: How Our Work-First Culture Fails Dads, Families, and Businesses-And How We Can Fix It Together, winner of the Nautilus Gold prize. Learn more at joshlevs.com.

While it is true the most boys are not rapists there is a profound emotional fear that is resident within the female sex that they too could be a victim of rape or sexual assault. The numbers are staggering. 1 in 4 women have reported a sexual assault and it is estimated that up to 60% of assault victims don’t report. Weigh that into the fear felt by women. What this post misses is the emotional fear that women live in. A fear of being dominated, sexually and in most other social interactions. Until our culture begins to address the… Read more »

Facebook355TweetPin1EmailShares356
wpDiscuz
Share this ArticleLike this article? Email it to a friend!
Email sent!