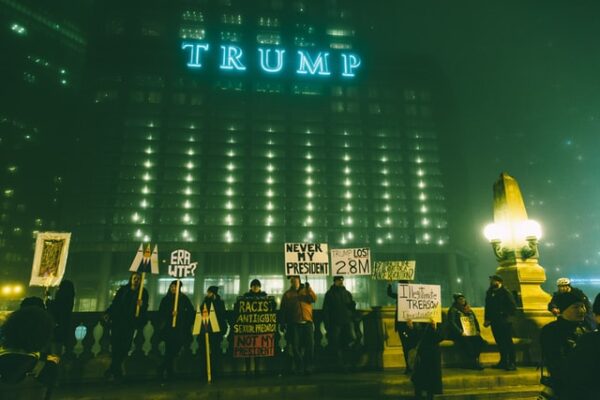 This election stands at a crossroads that is both cultural and political.

Teenage rebellion is what it is and probably always has been. I may be ancient now, but my coming of age involved sideburns, leather jackets, and switchblade knives in the world of fashion and endless conflicts with our elders in the world of art.

I found it hilarious that my elders thought “rock ‘n roll” was a “Negro” slang description for the sex act, an act the music would cause, albeit with the lights out and in the missionary position. “Race music” invaded from Mexico, pushed by monster AM transmitters far outside broadcasting regulations in the U.S. On the other end of the technology, there were tiny radio stations across the South, one horse radio for one-horse towns, about which the white Baptist preachers would warn of Satan’s arrival in a minor key with a strong backbeat.

When, as an adult, I studied the history of rock, I learned that the origin of the term was indeed about sex. Elvis Presley, when he covered black tunes, cleaned them up for white folks but also recorded the original versions for the vault that gets opened now and then for his eponymous channel on satellite radio. To my knowledge, Pat Boone stayed with the cover versions and if he ever sang “tutti frutti — good booty” the master remains well hidden.

I think most kids were like me. It was about the music, and if layers of meaning got peeled back and tweaked the prudes, that was a side benefit.

The wrong side of the culture wars was right about one other thing. We had and continue to have a great ride down the slippery slope. By the early seventies, it was “Kick out the jams, motherfuckers!”

Television went from depicting a married couple occupying the same bed smacking into a taboo to a recognition that gay sex exists and it’s all right to talk about it….at least after prime time. Lesbian was the L-word.

The F-bomb started with Richard Nixon’s White House tapes. His routine profanity was, in itself, newsworthy. These days, it’s more a firecracker than a bomb, but Joe Biden could still be oh-so-briefly embarrassed by a hot mic moment at a press conference about the Affordable Care Act, when he was caught whispering to President Obama,

This is a big fucking deal.

While I came to consider myself above pop culture frivolity and I seldom watched TV, the underlying assumption that pop culture was the tip of an iceberg of seriousness still occupied me. I’m retired now, but the view behind me shows that long after a tyro reporter had to talk around the original L word, a new one was still taboo: lie.

Public liars were said to have misspoken. The new L-word was unleashed after Donald Trump was inaugurated. During the 2016 election campaign, respectable news outlets would show the reality contradicting a Trump statement, but to use the L-word was thought to be a violation of the journalist’s duty to be objective. After he became POTUS, some of those same news outlets set up lie counters that are still clicking along in tens of thousands.

And the new F-bomb? It was released on Morning Joe recently: fascist. There was our Dear Leader addressing one of his super-spreader events where the coronavirus is a plot hatched by the Chinese and adopted by the Democrats to subvert the One True Party.

It was as if the talking heads looked at one another and said:

They were thinking about the events in Germany attending the rise of Hitler. I had been — some years ago — viewing a Trump rally on one screen next to an old newsreel of Mussolini on another.

The Morning Joe crowd did seem a bit late to the party. What was the significance of Charlottesville, I wondered, where our Dear Leader was unable to denounce a torchlight parade around a synagogue to the chant of,

Jews will not replace us!

U.S. politics may be on a slippery slope similar to the one I took to be a joyful ride in popular culture, but a slide to autocracy is anything but joyful.

It is good that we are now able to call a lie a lie and a fascist a fascist. It’s more truthful in the sense that Little Richard still seems to me to have captured truths that escaped Pat Boone.

In art, however, reasonable people can disagree.

In the epic political struggle between autocracy and democracy, there is no place to hide. We — each of us — is willing to share power with those we believe to be wrong or we are not. Political power is acquired by persuasion or by force.

The Framers of our young republic reduced their opinion to a writing we’ve tried to live by with varying degrees of success, but our general path has been to form a more perfect union with more freedom, not less, and to expand rather than contract the number of persons with access to the ballot.

The issue in the 2020 election is whether we erred and failed to understand that a strong leader is necessary to keep this nation wealthy and white. I’m not sure I’m allowed an opinion because I was born neither wealthy nor white. I learned to be a pretty good shot, but that’s outside my understanding of rational politics. I’ve thrown in with the wealthy white guys who won power in the revolution and have been giving it away ever since.

I expect Mr. Trump, if he reflects on such things, wonders what was in it for them.

Photo by rob walsh on Unsplash