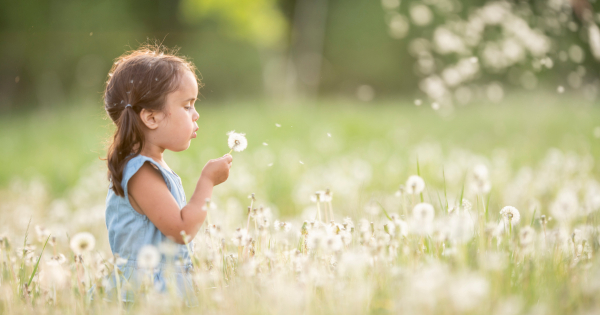 I believed in many things when I was young, like you should never eat an apple seed, because obviously a tree would grow in your stomach, or blowing dandelions into the breeze would render your dreams a reality.

Thank God some of those wishes landed on rocky ground or I would be married to Donny Osmond, with twelve kids, living on the Vegas Strip, and selling Jenny Craig with my sister-in-law Marie. All I can say is someone had my back. Praise be to God.

This life seemed to stretch out forever when I was young and now it seems so finite. As I consider the reality of a limited lifespan I find myself wondering how is it that I wish to live? And what a glorious privilege it is to have options.

Here’s an extremely relevant story written by Matthew and I don’t want to hear any whining because of it’s origins.

“A farmer went out to plant his seed. He scattered the seed on the ground. Some fell on a path. Birds came and ate it up. Some seed fell on rocky places, where there wasn’t much soil. The plants came up quickly, because the soil wasn’t deep. When the sun came up, it burned the plants. They dried up because they had no roots. Other seed fell among thorns. The thorns grew up and crowded out the plants. Still other seed fell on good soil. It produced a crop 100, 60 or 30 times more than what was planted.”

The point is we should be intentional when casting seeds (or dandelions) into the world because as my Dad always said, “what you think about will come about.”

The words you speak are efficacious (have effect) and they can not be revoked. I love the advice of Bernard Meltzer who says, “before you speak ask yourself if what you are going to say is true, is kind, is necessary, is helpful. If the answer is no, maybe what you are about to say should be left unsaid.” Sometimes this doesn’t apply, because we are called to be authentic, and true to ourselves, but like ladybugs in a garden, considerate speech is beneficial.

I tend to concur with the data that claims that which you visualize, set your sights on, make resolute has a good chance of becoming a reality. Why? It’s like golf. When I was learning to play I was instructed to stand behind the ball, face the next hole, and picture a line from ball to target. There was something about setting your feet and visualizing your shot but I’m fuzzy on those details. Regardless, the ball naturally follows the direction in which you are focused, and I think that is extraordinary.

This is not only true for golf but seems applicable to goals, dreams, resolutions.

Vision boards became a thing at least a decade ago. They may have originated out of New Age theology but when endorsed by celebrities such as Jim Carrey, Ellen DeGeneras, Oprah Winfrey, they became a zeitgeist of the times. Some critics claim it would be better to create an action board and focus on activities as opposed to ideas. It’s a thought (lol).

I was desperate to jump on the bandwagon so I went straight to Long’s (CVS predecessor) and bought a green cork board. Intent on creating a collage filled with my most notable dreams I went to work on finding symbolic images or succinct statements. At the time I had a quartet of active children, a husband who was a frequent flyer, a hundred and twenty pound akita lab mutt named Samantha Rose, and dreams I clung to as if my life depended on it.

As it turns out, my life dangled precariously from those dreams, and on some level I believe it was that which held me in place.

These seemed like implausible goals at the time, but I boldly pinned them to the board, and prayed they would land on fertile ground. I had five basic intentions, because five seemed like a reasonable number, and I didn’t want to inundate God with unnecessary burdens. She’s crazy busy.

I had to dig deep, but I found that old board just as I left it, abandoned in the back of my closet. A few of the papers sort of curled in on themselves, but they were redeemable, and let me just say it was a back to the future moment.

It ends up I eventually accomplished most of my cork board goals but not exactly as visualized. A graduate degree was earned but it took a village of peers and professors to make it happen. I published a book, total over-achiever, but it’s a catechetical guide for parishes, not a New York Times Best Seller. We traveled to Italy not once, but twice, because it turns out Italy is irresistible. I landed a salaried position at Notre Dame High School with my own parking spot, but it’s part time, and I think that’s why I love it so much. We set up housekeeping on the shores of Clearlake, we might be inundated with swarms of rice flies every summer, but it never fails to take my breath away.

Did you notice the dates go back more than a decade? I’ve learned one important thing from my dream board. It wasn’t just mine because nothing happens in a vacuum, “we are all inextricably connected to each other by something greater than us,” as beautifully stated by Brene Brown. Everything we do impacts others and I realize now this is something I need to consider before blindly pinning my intentions.

Pinterest is a modern day version of the Vision board. Today you can start a board on just about any theme, it’s a digital technology for gathering, and storing ideas. There are fabulous boards on the traditional stuff like wedding prep, home remodels, trips, gardens, doll houses, wardrobes, poetry, health, literature, education, and home decor, but also dog houses, cheese boards, succulent gardens, paranormal studies, and other kick-ass stuff. The possibilities are endless.

What would you pin for the future? Looking forward through the lens of the past is one way to create a better future but it’s complicated.

What does an education require of me? How can my work benefit others? What are the things a writer must consider before publishing? Does the privilege of travel come with any latent responsibilities? What does ownership imply?

What if all our dreams included holding space for each other? Oh what a world it would be…

“And did you get what you wanted from this life, even so? I did. And what did you want? To call myself beloved, to feel myself beloved on the earth.” Raymond Carver

At a recent On-Being conference I learned it’s my job to do the work, keep my eye on the ball, be civil, but allow room for the unexpected. Sort of like a hole in one.

“There are people with questions alongside their convictions. We can build relationships there,” claims Krista Tippett.

The farmer in the scripture above threw out seeds, some landed in inhospitable places, but others landed on fertile soil, and yielded a hundred times that which was expected.

I believe our hope lies in the passage of time especially if we seed the world with the noblest of intentions.

To laugh often and much;

To win the respect of intelligent people and the affection of children;

To earn the appreciation of honest critics and endure the betrayal of false friends;

To find the best in others,

To leave the world a bit better, whether by a healthy child, a garden patch or a redeemed social condition;

To know even one life has breathed easier because you have lived.

This is to have succeeded.

I’m Living in the Gap, keeping my eye on the ball, expecting the unexpected.

This post was previously published on CheryLoreglia and is republished here with permission from the author.