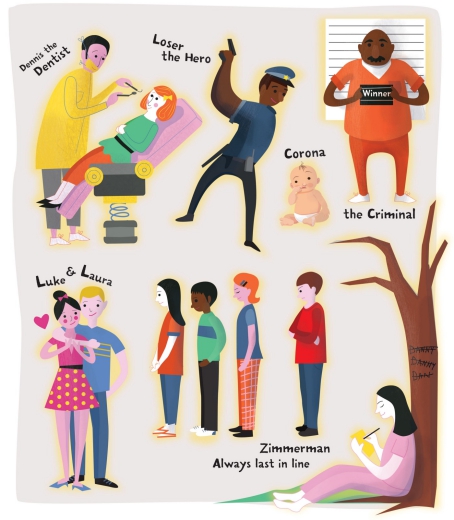 On March 24, twins — a boy and a girl — were born during India’s lockdown to combat the COVID-19 outbreak. They were named Corona and Covid.

You might be wondering why anyone would name a child after an event with a death toll. But before you judge, remember that parents today have a tremendous burden to pick the perfect baby name. The right name will augur a prosperous life, while the wrong name could doom your child as a future ward of the state. Or so we fear.

But can names change a child’s destiny? Are baby Corona and Covid headed for a life of social distancing?

A tale of two brothers — Winner and Loser

Subtlety was clearly not on Robert Lane’s mind when, in 1958, he named one of his sons “Winner Lane.” A few years later, another son was born, and for whatever reason, this child did not seem to be on the fast track to success. That son he named “Loser Lane.”

As you can probably guess, these two brothers took very different paths in life, but it might not be the paths you would have suspected.

Although from an underprivileged minority background, Loser went to prep school on scholarship and graduated from Lafayette College in Pennsylvania. He studied hard and made his mother proud by joining the NYPD.

Winner did not make his mother proud. He went on to have a rap sheet longer than a roll of toilet paper — domestic violence, burglary, trespassing, resisting arrest, etc. The two brothers no longer speak to each other.

To test their hypothesis, Levitt and Fryer sampled babies born in the same hospital with similar economic backgrounds in the 1970s and then tracked them into the present. They found names made no statistical difference in economic success.

Why Jamal doesn’t get the job

Unfortunately, there is some sobering research on how names can negatively affect a child’s future career. And really, this shouldn’t shock anyone.

In the study, Are Emily and Greg More Employable than Lakisha and Jamal? A Field Experiment on Labor Market Discrimination, researchers examined if your name could cause racial discrimination when applying to jobs.

This research has caused many job seekers to “whiten” their resumes. In a study in Administrative Science Quarterly, Katherine DeCelles found that candidates who concealed their race received twice as many callbacks for interviews than non-whitened resumes.

There is a simple solution to this obvious racial bias. Companies who claim they welcome diversity should remove names from resumes before reading.

I have never understood why people named “Richard” choose to go by “Dick,” but research indicates it might influence their choice of profession.

A name that is similar to an owner’s occupation is called an aptronym. Examples include: Anne and Frank Webb founded the British Tarantula Society. Urologist, Dr. Dick Chopp has a thriving medical practice and even offers specials on vasectomies. And my personal favorite, Lad Heroman, Lance Corporal, of the US Marine Corps is going to be the stud in my Bodice Ripper. (…if I ever write a Bodice Ripper.)

These people are examples of nominative determinism — the theory that people gravitate toward professions that sound like their names. Even the father of modern psychology, Dr. Sigmond Freud’s surname means “joy” in German. Now you know why he connected all our motivations with sex.

Psychologists have theorized that nominative determinism is a form of implicit egotism — the unconscious drive for humans to gravitate towards anything similar to ourselves. Researchers found that people are more likely to choose professions and residences that resemble their names.

I may be trapped by my ego too. My name is CarLYN and I live in the town of LYNNfield. Coincidence? (Although I should have become a car salesman then and not an author/illustrator.)

If your last name is Zimmerman, you might be traumatized by a childhood of being called on last. Well, I am here to tell you that your pain is real.

In a study by Journal of Consumer Research, researchers found that those who have surnames that start later in the alphabet exhibit more impulsivity when shopping. Researchers don’t know why the Zimmermans are quick to press the “buy” button, but they theorized that a life of being asked to line-up alphabetically has made the XYZ’s tired of getting their milk last. Psychologists have dubbed this the last name effect.

Your first initial can even affect your success with dating apps. In a study published by Evidence Based Medicine, researchers found online daters subconsciously associate names at the top half of the alphabet with higher incomes and education.

When it comes to names, opposites do NOT attract

Our name not only affects our occupation, income, and residence, but it can also affect our choice of mate. Researchers found that people are more likely to choose partners whose names sound similar to their own. Even having a name that begins with the same letter can make you more attracted to someone. Psychologists call this the name-letter-effect — the tendency for people to choose partners who share their first initial.

The power of names

Some may argue that there is little meaning behind names. It is merely a superstitious practice similar to stringing amber beads around a baby’s neck as a protection talisman. But when we name a place, a person, or a thing we imbue it with power. Is it a coincidence that currently Corona, New York is one of the hardest-hit cities in the world for this pandemic? Was Corona destined to be the epicenter for the Coronavirus or did we give it that misfortune through its name?

Feel free to debate it with me, especially if your name is Dick Dueler.

Carlyn Beccia (pronounced Betcha) is an author, illustrator, graphic designer, and presenter with blood type B+ (in case any vampires are reading this). Beccia's children’s books, including The Raucous Royals,I Feel Better with a Frog in My Throat, and They Lost Their Heads have won numerous awards including the Golden Kite Honor, the International Reading Association's Children's and Young Adult Book Award, and the Cybil Award. She was a commentator on the PBS documentary, Secrets of Henry VIII’s Palace and has spoken at the Computer Electronics Show, Boston Children’s Book Festival, several SCBWI events, and schools across the country. If you would like to know what I have in my zombie preparedness kit, contact me.