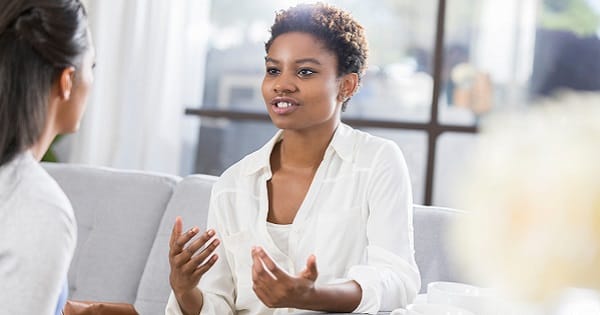 I have sought therapy four times in my life.

The first time was in my twenties after I confessed some traumatic experiences I had to a friend. I was struggling with how to handle them, and was overwhelming my friend by repeatedly discussing them while in tears. She mentioned therapy and referred me to a place.

I had to do something because I was checking all my boxes in life but still didn’t feel like I was doing enough.

I reluctantly made an appointment and went to the office to meet with the counselor. I felt terribly uncomfortable at that first appointment. I was nervous and unsure of what I was supposed to talk about. I wasn’t used to talking to strangers about my issues. I am very good at holding things in and pretending I am fine.

The counselor was kind. She listened and asked provoking questions, but after two sessions, it was clear I wasn’t ready. I felt incredibly defensive and convinced myself that she didn’t understand me or my problems. I didn’t go back, but I started doing my own self-help research.

The second time I went to counseling was while in a relationship.

It was about 10 years after my first counseling experience. I was struggling to manage work, my relationship and other life challenges. I went through bouts of insomnia, anxiety and depression.

One day, my then boyfriend asked why I locked the bedroom door when we went to bed at night. I didn’t think it was anything out of the ordinary. He said it wasn’t normal to him. I thought he was just being unreasonable.

I tried that night to leave the door unlocked. I had nightmares. I felt fear, anxiety and woke up sweating. I climbed out of bed, locked the door and only then did I feel secure. I saw there might be some merit to his complaint. This led me to go to counseling for a sexual assault I experienced and a shooting I witnessed in my twenties.

The counselor explained what hypervigilance was.

Hypervigilance is extreme or excessive vigilance. The state of being highly or abnormally alert to potential danger or threat and it’s a symptom of PTSD.

I took a test which showed I was suffering from trauma. I had about 90% of the listed symptoms. I entered counseling for several months to deal with that trauma and the resulting PTSD symptoms. It was normal for me to feel scared out in the world knowing that people were capable of attacking or hurting me. It took some time to unravel that and learn how to unwire that startle response.

As I did, I became more trusting in my relationships. I stopped having as many flashbacks. I was able to sleep with the door unlocked and without fear that something bad was going to happen to me.

The next time I went was to couples counseling.

He agreed, grudgingly, because he thought it was just going to be the counselor and I ganging up on him. He thought only married people went to relationship counseling and we weren’t married. He had a bunch of reasons why it made no sense to go, but only one for why he should: What we were doing wasn’t working.

We both sat in the counseling office and were surprised.

The Counselor didn’t take my side or his side. She listened, told us that both of us seemed to really love each other and gave us tips on how to communicate.

She had us go back and forth with one another and helped us reinterpret what the other person said in a way that didn’t raise our defenses. She then sent us home with a new way to discuss the major issues between us.

He was satisfied and didn’t think we needed to go back. But I thought there were other issues we needed to work on.

Unfortunately, by the time the next appointment arrived, a series of events happened that meant I didn’t challenge him and we let the appointment slip off the radar. Perhaps, it would have saved our relationship if we’d kept on going, but I’ll never know. Part of me wishes that I had continued the therapy without him, but I have since learned that everything happens in its own time.

Even with all of this counseling under my belt, I was unable to cope when my whole world came crashing down. Within a two year period, I lost my home, a baby, my father, my job and my then boyfriend suffered a life-altering injury.

I pushed through all of it and supported my boyfriend emotionally. I buried my father. I mourned my job and child loss. I used every tactic I learned in my arsenal to cope, but in the end, it just wasn’t enough. I ended up in an emotional crisis and a depression so deep that I couldn’t see my way out of it.

I fell into a dark, spiraling, hole.

I slept most days, barely ate, drank a lot and disconnected from everyone and everything. I lost all my identities at once. I didn’t know how to recover.

This time I couldn’t lean on sheer willpower to pull me out. My mind wasn’t thinking properly. There were days when I couldn’t form a complete sentence. When asked, I couldn’t remember my own age. I couldn’t even tell you what the date was.

My brain just couldn’t process the traumas. It was too much.

I found myself in a doctor’s office receiving a prescription for anti-depressants. They combined it with clinical therapy. This time, I would see a therapist instead of a counselor.

This therapy was not the same as what I had been through before. This was probing. It was difficult. The therapist was kind and compassionate, but she was digging into feelings that I had suppressed so long that I couldn’t even identify them.

It physically hurt. I would leave the office feeling fatigued and my muscles and eyes hurt from crying. I felt so much shame at being so vulnerable in front of someone.

But where she broke me down, she also built me up. I started to feel triumphant in just getting through the sessions.

She was empathic and shared insights that I had never heard before. She marveled at my strength while giving me permission to let go of needing to be okay all the time.

Eventually, I rebounded, but it took some time. I continued to work on myself. I even took a psychology class to understand why I broke down and how my brain was trying to cope.

I can truly say that therapy saved my life.

The stigma that is pervasive in our society could have prevented me from seeking help. Thankfully I understood how much the trauma was gnawing away at my potential to have a happy, healthy life.

My mental health is one of the most important things to me now. I unabashedly put it before anyone and anything. I’ve also learned that feeling weak and being weak isn’t the same thing.

Facebook58TweetPinEmailShares58
wpDiscuz
Share this ArticleLike this article? Email it to a friend!
Email sent!